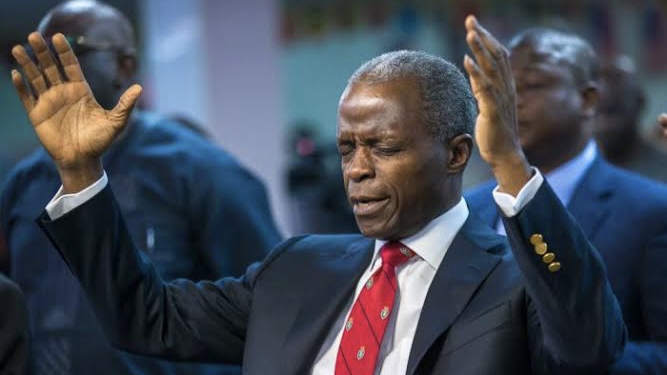 “Whether Christians or Muslims or traditional worshipers, they all agree with me that you are the sanest vice president we have ever seen,’’ Mr Kure, the founder of ThroneRoom Ministry, Kafanchan, said.

The preacher appreciated the vice-president for being the first from the presidency to step into his church.

Mr Osinbajo, while delivering a goodwill message at the 30th anniversary celebrations and 17th International prophecy and prayer conference on Thursday, had led prayers for the nation.

He led other clergymen in praying against forces of evil, hate, division, injustice, insurgency and other issues working against the country.

The vice president, who made Biblical references of the promises of God, prayed for love, justice and prosperity in Nigeria.

“So, we bind all forces of evil, of hate, fear, of division and of injustice; and we loose the peace of God; we release prosperity, love and justice in this land in Jesus name,’’ Mr Osinbajo prayed.

The vice president prayed to God to forgive the sins of Nigerians, especially disobedience, and answer their prayers.

“Oh God, heal this land, deliver this land from terrorism and insurgency, from the hand of the wicked, prosper this land, save your people oh God. Fulfil your promises of peace and prosperity,’’ he said.

Mr Osinbajo commended Kure for his immense contributions to the propagation of the gospel, training of clergies,  healthcare, among others.

On his part, Kure prayed for more glorious years ahead for Nigeria.

He thanked Mr Osinbajo for gracing the event, especially for “being the first’’ in the presidency to step into the church, while lauding the vice president for his exceptional qualities.

Earlier, in a sermon, Dr Steve Ogan, the Overseer, High Calling Outreach, prayed for a new Nigeria that would thrive in justice and peace, saying that threats to dismember Nigeria would not materialise.

He said, however, that there was a need to examine and address the issues that tended to destablise the country.

The highlights of the event were the presentation of books to Osinbajo and a joint prayer for him by the clergies of the church.