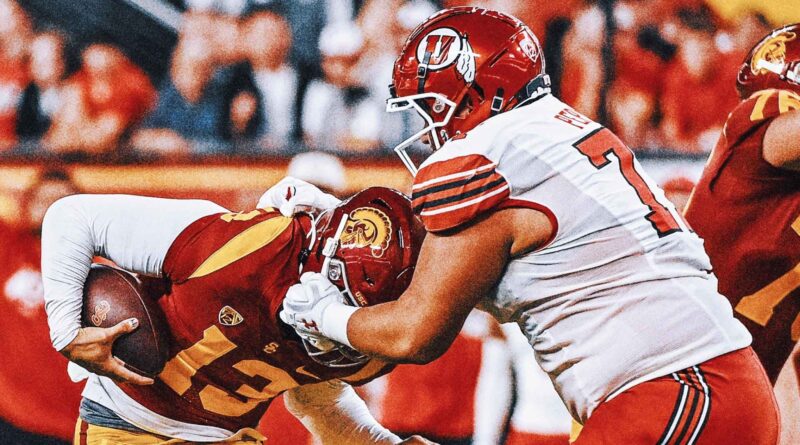 LAS VEGAS — The way these things work is that few people will remember the moments when USC quarterback Caleb Williams dazzled a sellout crowd in the first quarter, when he sliced through defenders for a 59-yard run or when he flipped a pair of easy touchdowns by manipulating his opponents with the quarterback equivalent for sleight of hand.

What the national audience will remember — a group made up of Heisman Trophy voters, the College Football Playoff selection committee and NFL executives — is how his team was outscored 44-7 after building a 17-3 lead. It will remember the way he crumbled in the second and third quarters when his completion percentage shriveled, and a corrosive fourth quarter speckled with sacks, inaccuracies and one season-altering interception.

It will also remember the defense — that inexplicably inept USC defense — for a pair of fourth-quarter touchdowns that defied tackling logic. The 60-yard touchdown from Utah quarterback Cam Rising to tight end Thomas Yassmin that ended with the bowling over of safety Calen Bullock. The 53-yard touchdown run by tailback Ja’Quinden Jackson that ended with the bowling over of Bullock for the second time in as many possessions to secure the school’s second consecutive Pac-12 title.

This 47-24 thrashing belonged to the Utes and cut short an improbable USC run toward the national semifinals.

Some thoughts from Allegiant Stadium:

It was hard to see things ending like this for Williams, the presumptive Heisman Trophy favorite, given how flawlessly he played the last month of the season and how otherworldly his statistics were in the first game between these teams. Williams completed 25 of 42 passes for 381 yards and five touchdowns in a heart-stopping 43-42 defeat at Rice-Eccles Stadium. All he’d done since then was average 348.2 yards per game and win five consecutive games to propel the Trojans to the doorstep of the CFP.

And Friday’s rematch began like the coronation many expected. Williams, whose fingernails were painted with letters spelling “F— Utah”, completed eight of his first nine passes for 108 yards and two scores. He broke three tackles on a jaw-dropping 59-yard scramble that showcased why gained more rushing yards than any USC quarterback since stats were first collected 70 years ago. His and Riley’s offense scored 17 points on their first three possessions in what felt like a potential rout.

The Utes would have none of it. Led by their defensive-minded head coach, Kyle Whittingham, they began swarming Williams with waves of pressure that capsized the Trojans.

Williams’ completion percentage dropped from 88.9% in the first quarter to 50% in the second and 33% in the third. He went more than 30 minutes of game time without throwing a touchdown as high-powered USC, which entered the game second in the country with a 55.3% conversion rate on third down, failed to move the chains on its first eight such attempts.

Yes, Williams finished with 363 passing yards and three touchdowns, but Whittingham’s defense hobbled him through a combination of five sacks and three additional quarterback hits. A limp became more pronounced as the game continued and peaked following a backbreaking interception when Williams tried to force a hole shot between the cornerback and safety in what appeared to be Cover-2. Utah’s R.J. Hubert stepped in front of tight end Lake McRee for the pick with 6:57 remaining and a 10-point lead.

For many Heisman voters, that might be their lasting image of Williams on his biggest stage this season.

It’s all Money for Utah

As the season progressed, this year’s Trojans became a fascinating case study for how much defensive waste a high-powered offense can overcome. Riley’s team arrived in Las Vegas with an offense ranked third nationally in scoring, sixth in passing yards per game and fifth in total offense, thanks in large part to Williams, the devilish dervish whose numbers have been so eye-popping that he began to lap the Heisman Trophy field throughout November. The only two games in which USC failed to reach 35 points were a 17-14 win over Oregon State and a 30-14 win over Washington State.

But Williams’ dual-threat greatness proved as necessary as it was appealing when, week after week, he dragged a cardinal and gold anchor loosely defined as USC’s defense. The Trojans resembled a house divided with Riley’s offense paying the bills and defensive coordinator Alex Grinch, who followed his boss from Oklahoma, overseeing the freeloaders on the living room couch. A group that ranked 91st in total defense was mediocre against the run (142.4 yards per game) and ghastly against the pass (262.8 yards per game) with but a single redeeming quality: an uncanny ability to force turnovers that kept the Trojans afloat.

They paired a three-and-out on Utah’s second possession with a forced fumble on the third to reach the midway point of the second quarter having only conceded a field goal, by which point Williams architected a trio of scoring drives to build a 17-3 lead. And that’s when Grinch’s defense regressed — nay, free fell — to the mean.

Utah reached the end zone on three of its next four possessions to reel off 21 unanswered points that confounded the Trojans in various ways. There was an 11-play, 63-yard march in which Rising converted a critical fourth and two by faking a toss to his halfback and surging forward to move the chains in the red zone. There was a 14-play, 81-yard march late in the second quarter that could serve as teaching tape for how to run a two-minute offense, with Rising finding his tremendous tight end, Dalton Kincaid, three times for 33 yards. There was a three-play, 48-yard lightning strike in which two USC defenders collided as wideout Money Parks turned a simple slant into a 57-yard score that gave the Utes a 24-17 lead.

Caleb Williams was intercepted by R.J. Hubert, then Ja’Quinden Jackson ran 53 yards for a clinching touchdown.

Oh, to be a fly on the wall Sunday morning as the CFP selection committee finalizes this year’s four-team field. The penultimate rankings entering conference championship weekend placed Georgia, Michigan, Texas Christian and USC atop the pack in that order, with the Bulldogs and Wolverines all but assured of entry even if they stumble in the SEC title game and Big Ten title game, respectively. Lurking in the shadows were a pair of CFP stalwarts in fifth-ranked Ohio State and sixth-ranked Alabama — two teams whose résumé crystalized in their regular season finales.

By dropping the Buckeyes from second to fifth following the lopsided loss to Michigan last week, the committee handed USC the simplest of equations: Avenge a one-point October loss to Utah in the conference title game and advance to the national semifinals as Pac-12 champions. The Trojans had already enjoyed the program’s best start to a season in 14 years, just like Riley had already tied Howard Jones in 1925 and John Robinson in 1976 for the most victories by a USC head coach in his debut season. That Riley guided his new team to the brink of this year’s CFP spoke to how quickly he invigorated a program that was treading water.

But the inverse of the committee’s equation was equally clear: Any slip by the Trojans would be enough for the one-loss Buckeyes to leapfrog them for the final spot. Legions of scarlet and gray fans still wounded from last week’s waxing at Ohio Stadium were living vicariously through Utah. And when the Utes scored a trio of touchdowns in the final 10 minutes, the roars you heard came from Salt Lake City and Columbus.

Michael Cohen covers college football and basketball for FOX Sports with an emphasis on the Big Ten. Follow him on Twitter at @Michael_Cohen13.