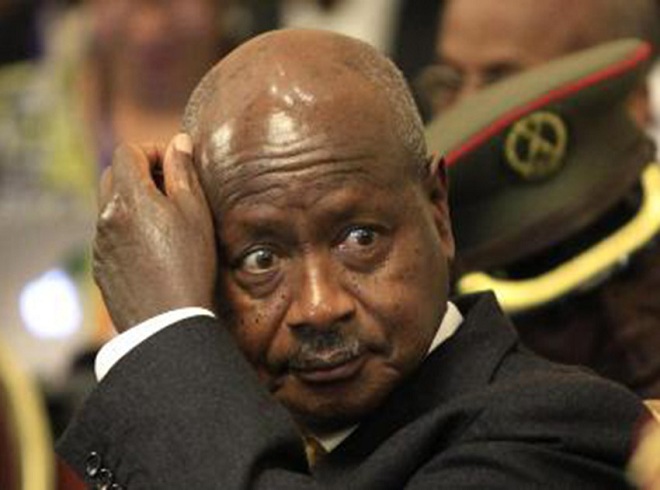 Non-removable Electronically Monitored Devices To Be Mounted On All Cars and Boda bodas At Owners’ Cost. – Museveni.

The president of Uganda His excellency, Yoweri Kaguta Museveni has revealed the government plans intended to enforce security in the country.

Among these is the installation of non-removable electronically monitored devices on all cars, other automobiles and boda bodas that Museveni says should be at owners’ costs.

“However, for the organised criminals, armed with rifles, collective security with cameras, patrol cars, foot standing patrols and other technical solutions are the way forward.” Says the president.

He further attributes the increased terrorism to the development in the country  where Ugandans have acquired developed in terms of infrastructure and automobiles ownership.

“How about the killings in the towns in recent times? Taking advantage of the huge success by the Ugandans of buying more cars, more boda bodas, building more hotels, building more shops and trading centres, and building more houses and having large numbers of our people in the towns, since 2012, they started on a series of killings and now more recently, kidnappings.

Initially, the Police used the old Police methods of relying on eye witnesses etc. The criminals are using simple techniques to defeat this. They use jacket hoods (kwebika ku mutwe), not to be seen properly. They also bend the registration plates of the “pikipikis” so that they are not properly read.
Due to the laxity in UCC, there was also the problem of people owning phones with false names.

The criminals take advantage of large numbers of cars, boda bodas, mobile phones and people, to do bad things and escape rapidly without being identified clearly and quickly using the old methods. That is why, following the killing of Kaweesi, which came following the killing of the Moslem Sheikhs, Joan Kagezi etc, I ordered to put emphasis on upgrading our technical means of monitoring crime in the towns and along the highways. Having to buy these items from outside takes time. Nevertheless, we are now moving.

The following are the technical solutions we shall acquire to monitor crime in the whole country, starting with the towns:
1. Cameras, mounted along the streets and highways, assisted by cameras by individuals, at their own cost, on their business premises and homes;
2. Improved forensic capacity of the police;
3. Electronically monitored devices mounted on all cars, other auto-mobiles, boda bodas, that are not removable from the platform that will help us to know where a particular vehicle was at a particular time; this will be done by vehicle owners at their own cost; and
4. Other technical means that I do not want to go in here.”  Reads a section in the president’s speech.

He attributed the delay of such measures to what he called prioritising of sectors like Defence , the roads, electricity, schools, health and the ICT backbone. He further added that his government has already started diverting chunks of money to “gap” so as to combat criminalism.

This comes hours after a staunch NRM member of parliament Rt. Col. Ibrahim Abiriga was assassinated as he headed home on Friday evening where he was shot with several bullets together with his body guard who doubled as his brother.
Also Read:  Museveni Promises To Hunt Down Col. Ibrahim Abiriga Killers In The Shortest Time Possible!