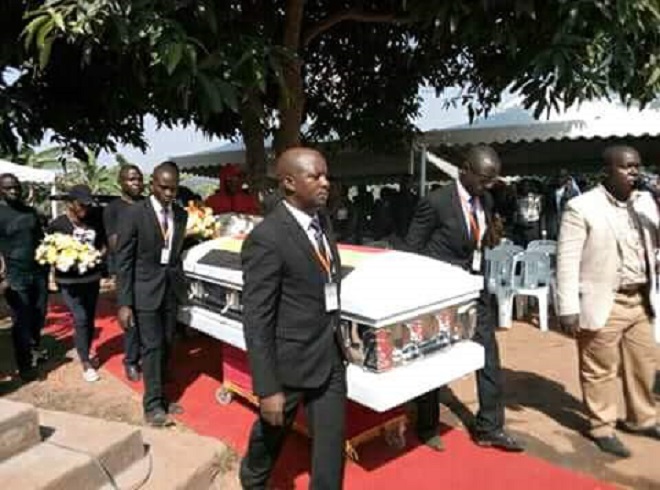 Just like it was yesterday at Kololo Airtstrip, it was now way different today in Kaga – Nakawuka at the burial of legendary Moses Ssekibogo, a half of the Radio and Weasel duo. This followed the chaos by the dangerous Kifeesi group that disorganised the event.

It was later revealed that not all that attended were mourners but some ere rather According to our reporter at the event, all was going well not until the hour of lowering Radio’s body into the grave.

Our reporter reveals that chaos started when people started throwing money instead of flowers in Radio’s grave and those that needed it most wanted to grab it.

This sparked off a lot of chaos all over the place as several other thugs were seen grabbing gadgets and bags from the mourners.

“We decided to be stand and watch from a distance. Hardly did we know that Bakifesi were standing all over the place. An hour later a guy standing behind me, who was trying to record a video booom was hit down by 6 guys everything taken from him. In one second he fainted as police came to rescue him, the guys stoned police. One guy gave a blow to a police man his gun fell ” reveals a one Bettina who witnessed a thuggery session

However police managed to rescue family members including the mother of the deceased and his wives & Kids into the house.

Moze Radio has been laid to rest today after two days of mourning, however here has been chaos wherever his body was starting from Neverland(his home) where Socialite Brian White was denied access and Weasel’s phone was robbed, Kololo Airstrip that haboured several fights and robberies up to Nakawuka which, a few hours ago was a battle ground.