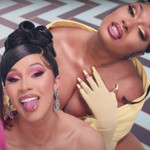 Of 7 Female Collabs Ever Nominated for VMA Video of the Year, Which is Your Favorite? Vote!

The 2021 MTV Video Music Awards announced nominations on Wednesday (Aug. 11), and for the first time in the show’s history, two female collaborations are vying for the coveted video of the year accolade.

“WAP” by Cardi B featuring Megan Thee Stallion and “Kiss Me More” by Doja Cat featuring SZA are both up for the honors this year, competing against “Popstar” by DJ Khaled featuring Drake (starring Justin Bieber), “Bad Habits” by Ed Sheeran, “Montero (Call Me By Your Name)” by Lil Nas X and “Save Your Tears” by The Weeknd.

Besides “WAP,” other all-female collabs that were nominated for video of the year and also hit No. 1 on the Billboard Hot 100 include: “The Boy Is Mine” by Brandy & Monica; “Lady Marmalade” by Christina Aguilera, Lil’ Kim, Mýa & P!nk (featuring Missy Elliott); “Fancy” by Iggy Azalea featuring Charli XCX; and “Rain On Me” by Ariana Grande & Lady Gaga.