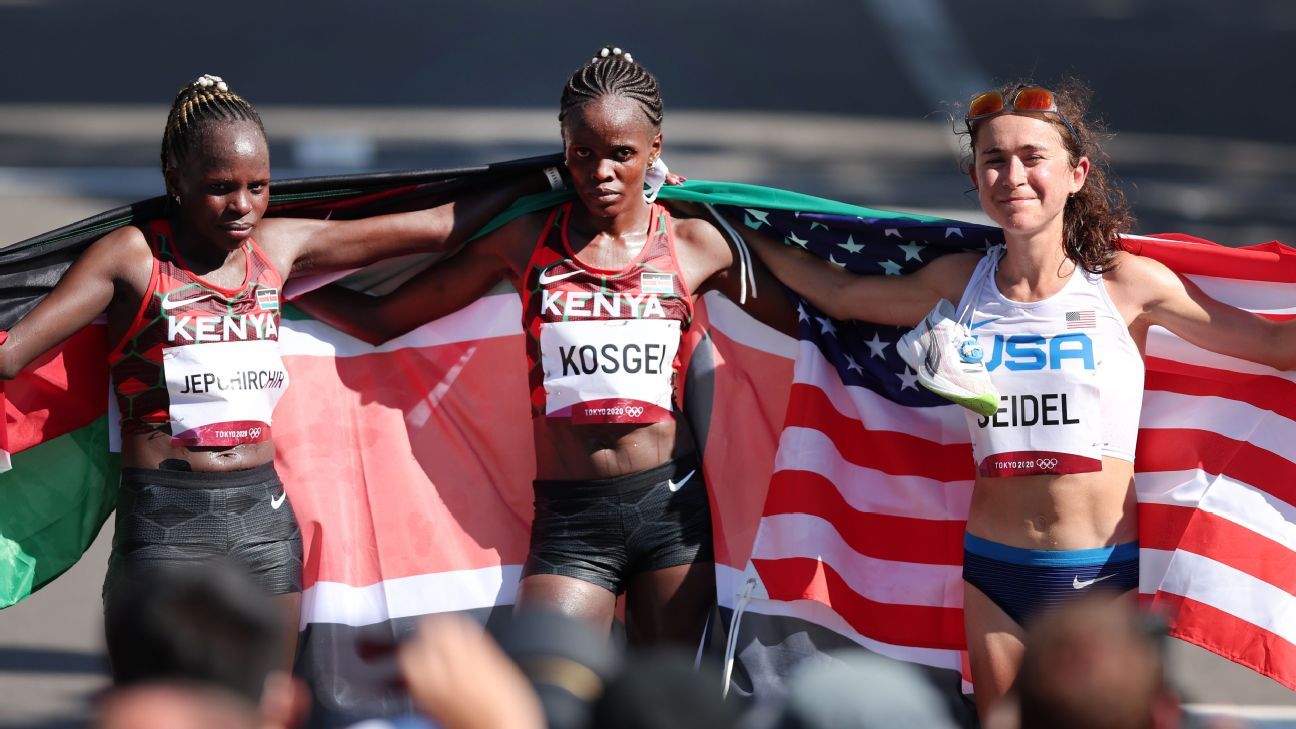 In basketball, Durant scored a game-high 29 points while Jayson Tatum added 19 off the bench as Team USA beat Rudy Gobert and France 87-82 for its fourth straight gold medal.

The U.S. exacted revenge on France, which defeated the Americans in group play. Team USA went on a 9-2 run, capped by a Tatum 3-pointer, that pushed the lead back to double figures.

Here’s the best of all the action in Tokyo:

A relay gold and a record for Felix

Allyson Felix’s legendary Olympic career came to a close on Saturday with a gold medal in the 4×400 meters as part of a star-studded American team.

With 11 medals, Felix is now the most decorated American track & field athlete in Olympic history — having surpassed Carl Lewis. She had taken the record outright for most Olympic medals by a woman in the sport on Friday after earning the bronze medal in the 400 meters.

Joined on the team by Sydney McLaughlin, Dalilah Muhammad and Athing Mu, the foursome crossed the finish line in 3:16.85 minutes — nearly four seconds ahead of second-place Poland. McLaughlin, who won gold in the 400 meter hurdles earlier this week, gave the U.S. an early lead during the first leg, and Felix further increased it as the second runner.

THE MOST DECORATED AMERICAN TRACK AND FIELD OLYMPIAN EVER. 🥇🥈🥉@allysonfelix | #TokyoOlympics pic.twitter.com/clZUbEvPPo

Read more: Felix’s grit, more than speed, made her a legend

In a masterful game of pitching and small ball hitting, Japan defeated the United States, 2-0, to win the gold medal in baseball. It’s the country’s first gold in baseball.

Japan could be holding the crown for a while. The sport’s return to the Olympics was on a provisional basis. Baseball will not be played in the 2024 Paris Games.

USA basketball stays atop the podium

Kevin Durant showed out in a gold-medal game again.

Durant led Team USA with 29 points while Jayson Tatum scored 19 as the Americans hung on to beat France 87-82 to win Olympic gold for the fourth straight Games.

The U.S. led by as many as 14 but saw its lead cut to three with 10 seconds remaining. That’s when Durant iced the game with two free throws.

Jrue Holiday and Damian Lillard both scored 11 points for the Americans, who got revenge after losing to France in pool play.

Moments after Felix and the American women dominated their race, their male counterparts followed suit and earned the gold in the 4×400 as well.

The team, made up of Michael Cherry, Michael Norman, Bryce Deadmon and Rai Benjamin, finished in 2:55.70 – almost a second-and-a-half in front of the Netherlands, who took the silver and set a new national record. Botswana notched the bronze medal.

And it’s another relay gold for @TeamUSA!#USA take #gold in the men’s 4 x 400m relay after a thrilling final!@WorldAthletics | #StrongerTogether | #Tokyo2020 pic.twitter.com/Z7QCZAT1aC

The Netherlands’ Sifan Hassan’s quest to win the “triple” was halted on Friday with a third-place finish in the 1500 meters on Friday, but her Olympics still concluded with a gold medal in the 10,000 meters on Saturday.

Also the champion in the 5,000 meters, Hassan leaves Tokyo with two gold medals and a bronze. After crossing the finish line in 29:52.32 minutes on Saturday, Hassan raised her arms in victory and then fell to the ground. After logging over 15 miles of competition during the Games, Hassan had to crawl to get off the track and then lay on the side covered in ice packs.

She had been open about the toll participating in the three races was taking on her body when speaking to the media on Friday.

“The last couple of days have been very stressful and it has taken lots of energy from me,” she said.

The 28-year-old is the reigning world champion in the 10,000 meters and she was part of a lead group of three runners for much of the race. She utilized her trademark kick down the final stretch to separate herself from silver medalist Kalkidan Gezahegne of Bahrain and bronze medalist Letesenbet Gidey of Ethiopia.

Hassan is just the second woman in history, and the first since 1948, to win a medal in three individual track races during a single Olympic Games. — D’Arcy Maine

Jessica Springsteen speaks about winning the silver medal with the U.S. equestrian team.

Not even a tropical storm could stop Nelly Korda from winning gold at the Olympics. Not even Japan’s Mone Inami, New Zealand’s Lydia Ko and India’s Aditi Ashok.

The American Korda, who remained calm, cool and collected during all four rounds of the women’s golf tournament, finished at 17 under. She flashed a smile and waved after her gold-medal-clinching putt — no huge celebration, but rather an acknowledgement that she deserved to be there.

But she wasn’t the only one at Kasumigaseki Country Club making that case. After Korda double-bogeyed the seventh hole, putting her in a three-way tie with Ko and Ashok, she hit the reset — the three-birdies-in-a-row reset — to take a three-stroke lead.

Korda held the lead at 17 under, but with two holes to play, tournament officials blew the horn, suspending play due to thunderstorms. Inami was one stroke back in a solo second, while Ashok and Ko, the silver medalist in 2016, were tied for third at 15 under.

The delay lasted 45 minutes, and when play resumed, Inami drained her birdie putt on 17 to share the lead with Korda. But that didn’t last long, as she bogeyed the final hole while Korda finished with a par.

Inami claimed the silver medal in a playoff, while Ko took the bronze. — Charlotte Gibson

Team USA’s Molly Seidel ran her first marathon ever in February 2020 — at the U.S. Olympic trials. A year and a half later, she is the Olympic bronze medalist at Tokyo, finishing at 2:27:46. Kenya went 1-2 — Peres Jepchirchir won gold with a 2:27:20 finish, followed by Brigid Kosgei. The women’s marathon race was moved to earlier in the morning on Saturday in Sapporo, Japan, due to heat and humidity.

“It takes 10 years to become an overnight success.” – marathoners

For the third straight Olympics, USA women’s water polo has the gold medal. Ashleigh Johnson was a rock star in goal as USA won 14-5. It’s the largest margin of victory in a gold medal game in Olympic history.

In the run to her third gold, Maggie Steffens reset the record book. She now owns the record for all-time Olympic scoring with 56 goals.

The U.S. men have not had a great run in Tokyo, but the men’s 4×400-meter relay final (8:50 a.m. ET) will give Team USA a chance at redemption. In the heats, the U.S. preliminary squad of Trevor Stewart, Randolph Ross, Bryce Deadmon and Vernon Norwood finished at 2:57.77 to win their heat and automatically advance to the final. They will face Jamaica, Netherlands and Italy, who will all look to make the podium.

For the women’s 4×400, defending champion USA heads into the relay final (8:30 a.m. ET) as a clear favorite, winning its heat in 3:20.86, the fastest time of the entire prelim heats. Ten-time Olympic medalist Allyson Felix is expected to join the team for a chance to win her 11th Olympic medal.

Gold on the pitch

Defending champion Brazil will take on Spain for a shot at the gold medal at 7:30 a.m. ET Saturday. Spain is coming off a 1-0 semifinal victory over Japan, while Brazil beat Mexico 4-1. In 2016, Brazil won the gold medal in a penalty shootout against Germany.

Does gold run in the family?

USA high jump star Vashti Cunningham, the 23-year-old daughter of former Philadelphia Eagles and Minnesota Vikings star Randall Cunningham, is positioned to be a medal contender when the women’s high jump final begins (6:35 a.m. ET). Her 1.95-meter jump in the prelim round automatically qualified her for the finals. She finished first at U.S. Olympic trials in June, and the month before that, she set a personal record with a jump of 6 feet, 7½ inches.