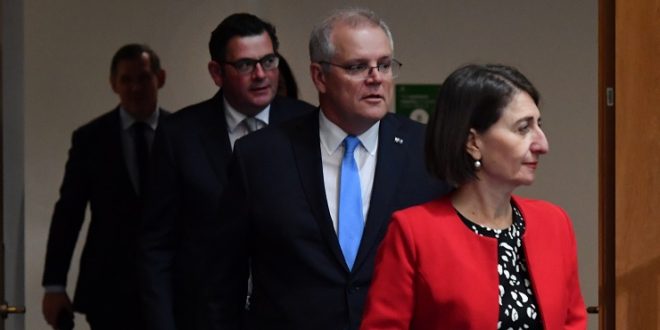 A tumultuous week of tense relations and public spats between state and federal government leaders could come to a head today as a critical meeting of national cabinet takes place.

The Australian ($) reports Prime Minister Scott Morrison is seeking to end lockdowns and restart international travel (for the vaccinated) by cementing vaccination thresholds with state and territory leaders. Morrison, who spoke to the Oz, said he hoped to agree upon the “magic numbers” that would see restrictions ease and travel jumpstarted.

A rare consensus has formed as several premiers are demanding slashed international arrival caps of up to 80%, as the Herald Sun ($) reports — among them, WA Premier Mark McGowan, embattled Queensland Premier Annastacia Palaszczuk, and Victorian Premier Daniel Andrews. According to the government, as it stands Melbourne can accept a maximum of 1000 arrivals per week, Perth and Adelaide can take 530 arrivals, Brisbane can take 1300, while NSW has the lion’s share at 3010 maximum arrivals a week. Guardian Australia’s latest data blog is a great insight into how many are actually arriving, and why.

AstraZeneca (and the extremely rare blood clotting condition associated with it) was a hot topic last night on ABC’s Q&A. Michelle Ananda-Rajah, an infectious diseases expert, said Australia would see “one to two cases per day” of the blood clotting condition if the country started vaccinating 20,000-40,000 people under 40 with AstraZeneca daily, The Sydney Morning Herald reports. But the ABC spoke to several young Australians who are jumping at the chance to receive the jab.

Overseas, the Delta variant is proving just how dangerous the strain can be — a devastating third wave is sweeping Africa where a little more than 1% of the population is vaccinated, with nine nations detecting the highly viral strain, Al Jazeera reports. Both the number of overall cases and deaths between June 14-20 is almost 40% higher than in the week before, according to Tedros Adhanom Ghebreyesus, director-general of the WHO. The Conversation explains how the Delta variant’s symptoms differ from other strains of coronavirus.

In good news, Australia had a record-breaking day in its national vaccine rollout yesterday, with 161,390 jabs administered — meaning almost 8% of eligible Australians are fully vaxxed, The Australian ($) reports.

Stay-at-home orders affecting Greater Sydney (including the Central Coast, Wollongong, Shellharbour, and the Blue Mountains) are in place until midnight tonight, after yesterday saw 24 new COVID-19 cases, the most out of any state or territory. It comes as a swimming pool, soccer stadium, and Terminal 2 at Sydney Airport were added to NSW’s list of exposure sites overnight, NSW Health tweeted.

Queenslanders are awaiting today’s case totals, which could determine whether their lockdown is extended beyond 6pm tonight, while the 1pm end to Darwin’s lockdown is now at risk after a local man visited a corner store on the way to a quarantine facility, The Australian ($) says.

THE HEAT IS ON

Millions of Australians may have shivered through a bitterly cold month, but it was an absolute scorcher for several countries sweating through the opposite season. Yesterday, Omidiyeh, a city in Iran recorded a high of 51 degrees, while on June 22, Kuwait’s Nuwaiseeb recorded 53.2 degrees. In the past week alone there have been 486 sudden deaths amid a heatwave topping 50 degrees in Canada’s southwest. Al Jazeera has mapped the hottest temperatures around the world.

It comes as Australia ranks last for climate action among UN member countries, Guardian Australia reports. A bleak future stares back at us: Australia’s rainforests will dry out, heatwaves will become more intense, and thunderstorms will create heavier flooding, the SMH reports, with findings drawn from the federal government’s Earth Systems and Climate Change Hub report.

But the week also brought some good environmental news! The Kangaroo Island dunnart has been declared predator-free, calves are thriving on NSW’s south coast amid a fox-control program, spotted-tail quolls are making a 30-year comeback near Sydney, and a “chunky”, “delightful” endangered mouse has survived drought and bushfires in Queensland.

Have a great and hopeful Friday.

THEY REALLY SAID THAT?

Nobody, nobody in Australia predicted that we were going to have this massive housing boom. The stress levels are through the roof.

The Frame and Truss Manufacturers Association of Australia boss accidentally punned while talking about how the global timber shortage is affecting a surge in home building and renovations in Oz.

On car park rorts, the fix was in from the very start — and the bureaucrats knew it

“Not only was [the Infrastructure Department’s] recordkeeping around the project poor, with no evaluation plan (or even any KPIs) developed to see if several hundred million dollars of taxpayer money had been well spent, but the ANAO could find no documents showing the Department of Infrastructure ever developed a plan for identifying projects even at the earliest stages when Tudge asked for car park fund ideas.

“Almost as if they knew that their services wouldn’t be required when it came to identifying where money should be spent to ‘bust congestion’.”

Who’s been looking at your check-in data? We asked the states and territories to ’fess up

“When the federal government first proposed the contact tracing app COVIDSafe (which used Bluetooth to log close contacts), it responded to fears of a mass surveillance state by announcing the data would not be used by police.

“But adoption of a QR code check-in system — the widely used, low-tech alternative now mandatory in many places around the country — was left to states to implement. As it turns out, these states did not assume the same protections for their citizens, meaning that data volunteered in the name of public health has been accessed for other reasons.”

“Hunting season began some time ago, when upstart factional leader Adem Somyurek had his office video bugged — with as someone noted military-grade equipment — and alleged Victorian branch stacking operations laid bare. Mr Somyurek has denied all wrongdoing and late last year used parliamentary privilege to accuse the media and others in Labor of wrongdoing.

“Regardless, Somyurek had become a major pain for the legacy factions and their leaders, turning a group of non-Anglo SDA (Shop, Distributive and Allied Employees Association, the Shoppies) faction renegades (the “mods”) into one capable of dictating terms to the big boys. A big get was to persuade Bill Shorten’s AWU faction in (along with some small unions run by his cronies) after the Shorten-Conroy alliance, badged as Labor Unity, broke up. The next step was an alliance with the new industrial left faction led by the CFMEU, breaking away from Kim Carr’s socialist left.”

READ ALL ABOUT IT

Caster Semenya vows to continue her fight against 800m ban

The pandemic is now putting the ‘experts’ in their own world of pain — Michelle Grattan (The Conversation): “At the centre of the argument is the Australian Technical Advisory Group on Immunisation’s advice, which prefers Pfizer for people under 60 but doesn’t rule out AstraZeneca for them… Morrison on Monday seized on the ‘let-out’ in ATAGI’s position for practical and political reasons. He’s desperate to speed the rollout. The country has a lot riding on this — lockdowns and shut borders will continue while we’re not adequately vaccinated, and an outbreak could easily go wild.”

Sex work is real, legitimate work and should be decriminalised — Fiona Patten (The Age): “Many of those who state that they are concerned for sex workers are actually further stigmatising and stereotyping sex workers by deliberately reinforcing negative attitudes of workers with no agency and no options… [Sex workers] don’t want the industry banned in any way. They don’t want the over-regulated system that we have now. They simply want their workplace to be decriminalised, like the hairdresser next door to them or the doctor down the road. If they have trouble at work, they can call the police like anyone else, and they comply with all the same parking and zoning laws that their neighbours do.”

Melburnians know that we are only ever between lockdown — Michelle Griffin (The Age): “The truth is, fellow Australians, we watch your numbers with the same heart-in-mouth anticipation with which we watch our own. Lockdowns are big, blunt instruments but we know they work. We really want all the other stay-at-home orders to succeed and for Australia to somehow, yet again, work its way back from the brink of what could become a real outbreak. And nobody in Melbourne has forgotten what that feels like when the daily cases spike takes off — it’s awful.”