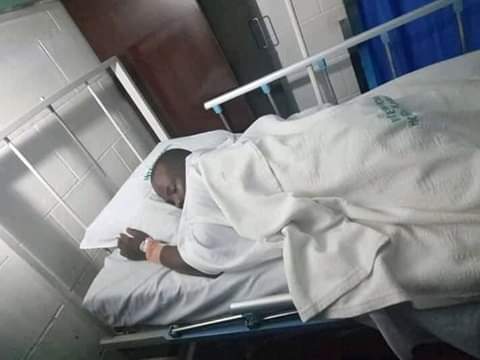 After being rushed to hospital a week ago with stomach complications, NBS Show host Kazibwe Bashir was continued to Nairobi for better treatment.

His wife Zulfah Kazibwe has come out to give an update about his condition on his social media page.

Below is the full communiqué from the wife.

Asalam Alaikum,
Greetings to everyone,
Am Mrs Zulfah Kazibwe, wife to Haj Kazibwe Bashir.
As family,We are very grateful to you all for the show of support and standing with us in these challenging times.Alhamdulillah
as you must be aware, Bashir is currently admitted in a Nairobi hospital (whose details family has chosen not to disclose for the security of our patient given the situation he was brought in here and the circumstances surrounding his illness).

We are however hopeful that he will be well.

On arrival here, Doctors made several examinations to ascertain the kind of illness and was swiftly put on medication to contain the same.However,on Monday (Tomorrow 10 June 2019) he’s to undergo further examinations for the liver,intestinal check up amongst others including a brain scan.

He is going through excruciating pain in the abdomen and a terrible headache.
Even when he’s unwell, he strongly hopes and believes to improve. Bashir has extended his sincere appreciation to you for the support and prayers.
In his own words with a painful smile he has had this to say _”Abantu baffe babeere bagumu…Mungu ajja tuwa ekisinga obulungi. Bagambe nti mbagaala nyo”._

Once again all praise goes to the Good Lord who is enabling us come this far. To the good and kind hearted people out there,Our prayers for a better reward will always be with you.

We wish him a quick recovery.

He hosts two shows on NBS TV including controversial Tamale Mirundi- Show. He also hosts another one on Bukedde radio.