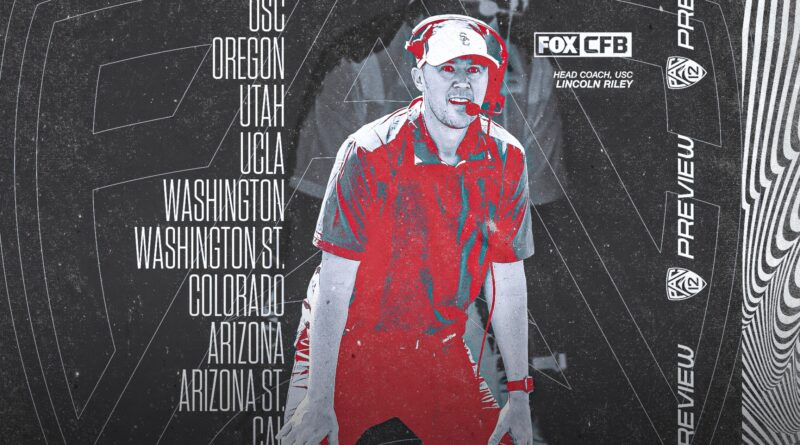 Here are the top five storylines for the Pac-12 heading into the 2022 college football season.

1. Is Utah going to make its first trip to the College Football Playoff?

From my preseason Top 25 published this past weekend: “Kyle Whittingham’s Utes return 14 of their 22 starters from last year’s Pac-12 title team and added at least one bona fide star transfer in Mohamoud Diabate, a linebacker expected to fill the void left by Devin Lloyd. The Utes can make a mark with a win at Florida on the road that could put them on a path to the program’s first-ever invitation to the CFP. Let me see you sundance, Utah.”

I ranked Utah as the fifth-best team in the country. The AP ranked the Utes at No. 7.  There is reason for optimism in Salt Lake City, and it behooves Utah to capitalize on it with a win against Florida.

2. Will Lincoln Riley win 12 games, win the conference title, produce the Heisman-winning QB and make the CFP in Year 1 at USC, like he did in Year 1 at Oklahoma?

My Top-25 take: “We know Lincoln Riley can put together an offense, and he’ll certainly have the firepower to come out blazing with quarterback Caleb Williams, running back Travis Dye and wide receiver Jordan Addison.

“What remains to be seen is whether coordinator Alex Grinch and his defensive staff can turn out a Trojan defense that can win the Pac-12 and push the Trojans to their first CFP bid in history. Flip that F-18 upside down, paint the target, climb that mountain, take 9Gs to the face and prepare to dogfight all the way home. Fight(’s) on.”

Aside from that, the Utes probably feel some kind of way about all the love USC has been getting from folks inside and outside the Pac-12 just because they changed head coaches again. Like many, I’m interested to see how the Trojans hold in the Pac-12, let alone against a stout Fresno State squad returning the best Group of 5 quarterback in the country and a Notre Dame squad that is riding high on the popularity and passion from elevating Marcus Freeman to head coach.

Utah or USC the best bet to make the CFP out of the Pac-12?

RJ Young believes only one team from the Pac-12 has a realistic shot to make the CFP this year, and that team will be the winner of the conference championship game.

3. Can Dan Lanning return Oregon to heights it hasn’t seen since Chip Kelly roamed the sideline in Eugene?

My Top-25 take: “Dan Lanning’s Year 1 in Eugene features a gauntlet nonconference run. If UO comes out of that start to the season 3-0, we’ll know the Ducks are ready to take in more than Disney’s Youth Hockey Iceland in a made-for-TV movie.”

Lanning and defensive coordinator Tosh Lupoi could use a full season of Justin Flowe, who is one of the most talented players in the sport.

Flowe has played in just 15 quarters, but he was a consensus five-star recruit and the second-highest ranked player the Ducks have ever signed. He recorded 14 tackles against Fresno State in their 2021 season opener and is the first Oregon player since 2007 to record 14 tackles and force a fumble in the same game.

On the flip side, the Ducks have three death matches on their nonconference schedule that includes a 10-win FCS squad (Eastern Washington), a 10-win FBS program (BYU) and the defending CFP national champion (Georgia).

Why Oregon will underachieve in Dan Lanning’s first season

RJ Young explains why he thinks Washington State will top its projected win total of 5.5, then shares why he thinks Oregon will not be able to win more than 8.5 games.

4. Can UCLA‘s Zach Charbonnet be the best running back in the league?

UCLA would like nothing better than to build on its 8-4 record last year (6-3 in the Pac-12) and give itself an opportunity to play in the conference championship for the first time in the Chip Kelly era.

With the league’s decision to scrap divisions, the Bruins can do that with games against AP Top-25 opponents Utah and USC at home and a road game against Oregon.

But to accomplish that feat, the Bruins need Charbonnet to be the best tailback in the league. After rushing for more than 1,100 yards last season and scoring 13 TDs, he, alongside quarterback Dorian Thompson-Robinson, must be formidable in 2022.

Now would be an outstanding time for the Pac-12 to remind us all how good the football is on the West Coast. The past five years, it has suffered a series of embarrassing losses and CFP selection misses, and now it has been raided by the big bad Big Ten for its two biggest brand-name programs.

The 2022 fate and future of the Pac-12 conference could very well rest on the shoulders of the Utes.

Bonus: Is BYU a CFP contender?

Obviously, BYU isn’t in the Pac-12. But since the independent Cougars went 5-0 against Pac-12 teams last season and play Oregon and Stanford this season, they might as well be.

My Top-25 take: “The Coogs have at least 10 wins in each of the past two seasons, and Kalani Sitake is poised to make that 30 in three years with the return of Jaren Hall — 23 TDs to just five INTs — if he can find another tailback as talented as Tyler Allgeier for 2022. But that’s a big if with Notre Dame, Arkansas, Oregon and Baylor on the schedule. But that’s also the kind of schedule that proves the Cougars are legitimate CFP contenders.”

If the Coogs can run the table — that’s a big if — there is no reason to believe they can’t earn an invitation to the CFP on their way to establishing themselves for their entry into the changing Big 12 in less than a year. What a boon it would be for the Big 12 to have two of its newest members with experience in the CFP not named Oklahoma.

RJ Young is a national college football writer and analyst for FOX Sports and the host of the podcast “The No. 1 Ranked Show with RJ Young.” Follow him on Twitter at @RJ_Young, and subscribe to “The RJ Young Show” on YouTube. He is not on a StepMill.