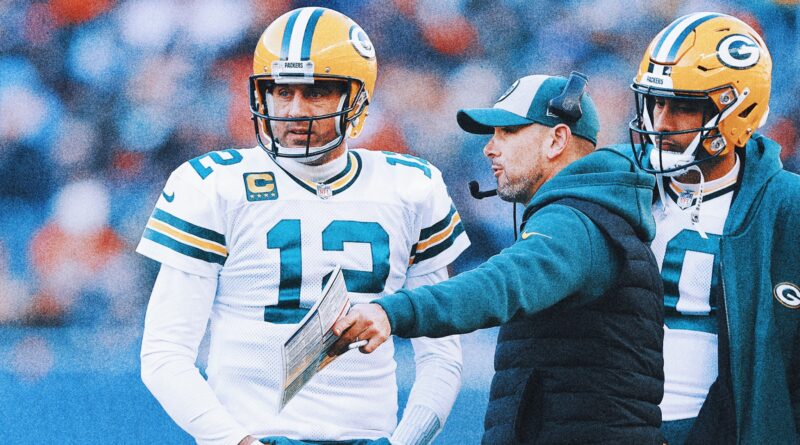 That was Packers quarterback Aaron Rodgers just one week ago. Green Bay was coming off a loss to the Philadelphia Eagles on Sunday Night Football and was sitting at 4-8 on the season, lost seven of their last eight and had a 3% chance of making the playoffs.

Rodgers had also sustained a rib injury in the game on top of dealing with a broken thumb on his throwing hand. Morale was, predictably, low.

Nick Wright explains it was bad for the Packers to win against the Bears because the illusion of making the postseason is still alive when Green Bay should be focusing on playing Jordan Love to decide on picking up his fifth-year option.

But I’m reminded of something Buccaneers head coach Todd Bowles said to me ahead of the Packers’ Week 3 matchup with Tampa Bay: the thing about Aaron Rodgers is, you can never, ever count him out.

“He’s probably one of the smartest quarterbacks I’ve ever played against,” Bowles said in September. “I have a respect for him because with him, they’re always in every ball game and you can’t say that about everybody in the league.”

Sure enough, last week the Packers then marched into Chicago and Rodgers engineered yet another fourth-quarter comeback to win his eighth straight over Green Bay’s division rivals, and odds are, at 5-8, the Packers are starting to rethink things.

“We were certainly expected to be competing for a championship and we are still in it,” said Packers general manager Brian Gutekunst on Monday. “If we’re able to dig our way back into this thing, we still kinda feel like we have the ability to do that.”

Green Bay now has a 4% chance to make the playoffs now.

The Packers have a chance to reset in Week 14. They have their long-awaited bye week, and it’ll give Rodgers a chance to get closer to healthy, which seems feasible after what the veteran quarterback said following Sunday’s win.

“I think my thumb is close to being a non-issue,” Rodgers said. “I’m able to go back to taking a snap the old way, which has been really nice, and the ribs will be close, probably.”

Yeah, Rodgers has had to take snaps completely differently since injuring his thumb in Week 5. And now that he’s rounding the corner with Green Bay still mathematically in it, where does that leave backup quarterback Jordan Love?

The team has to make a decision of whether to pick up his fifth-year option this offseason. Rodgers’ future with the Packers and in the league in general — as soon as next season — is in question, especially given some of the drama already this year. No, the Packers aren’t mathematically eliminated, but their shot of making an actual run at a championship, something Gutekunst said himself was the expectation this year, is next to nothing. It’s time to start thinking about next season and the future of the franchise. That starts with figuring out if perhaps sitting Rodgers in favor of evaluating Love for the duration of the season is the best course of action in the long term.

Jordan Love came in relief of Aaron Rodgers against the Eagles and immediately led the Packers on a scoring drive. Skip Bayless and Shannon Sharpe discuss the Packers QB situation.

Love came in relief of Rodgers when he got hurt against the Eagles in Week 12. The former first-round pick completed 6 of 9 pass attempts for 113 yards and a touchdown for a passer rating of 146.8 — darn near perfect. It’s a small sample size, though. Love has only attempted 18 passes this season, completing 12 of them. He played in six games in his rookie season, completing 36 of 62 throws for 411 yards and two touchdowns. That’s hardly confidence-inducing for a player you traded up in the first round to get.

“We’ve obviously seen him for three years in practice, and there was a stretch while Aaron was banged up, where he’s had a lot of reps with the ones,” Gutekunst said. “I think that was great for him, it was great for us to see, but it was also just really good experience for him game planning each week. Again, I think quarterbacks have to get into this league and play a bunch of games before they learn how to win, but I do think we feel very confident that Love can move the ball, score points and do the things that we ask of our quarterbacks.”

The conflicting and noncommittal statements don’t end there, either.

“We’re really pleased with his progression and what he’s been able to do,” Gutekunst continued. “I think it would be really good for him, the growth you need to go through, seeing things for the first time, making those mistakes you need to make, but I think from our end of it, we’ve seen what we need to see.”

So, the general manager thinks it would be good for Love to get more game experience but not for the purposes of making the decision to pick up his fifth-year option or not. That’s what I’m getting from those quotes.

“I think whoever gives us the best chance to win needs to be out there,” Gutekunst said. “That’s only fair to this locker room. That’s the way I feel about it. I think Matt (LaFleur) feels the same.”

But he didn’t say Rodgers.

Given that Rodgers is on the road to recovery and has some swagger back after the win in Chicago, it would be hard to believe that Rodgers still feels as he did a week ago with those aforementioned first comments. If the Packers are winning, the conversations about sitting Rodgers shouldn’t be had in his mind. And if what Gutekunst says is true, and the Packers’ brass already knows whether or not they’re going to pick up Love’s fifth-year option based on what they’ve already seen from him, then maybe it’s only fair to let Rodgers see if he has some magic left in him this season.

It’d be a hell of a comeback for one of the league’s comeback kings and would show us all once again to never, ever count Aaron Rodgers out.

Carmen Vitali covers the NFC North for FOX Sports. Carmen had previous stops with The Draft Network and the Tampa Bay Buccaneers. She spent six seasons with the Bucs, including 2020, which added the title of Super Bowl Champion (and boat-parade participant) to her résumé. You can follow Carmen on Twitter at @CarmieV.