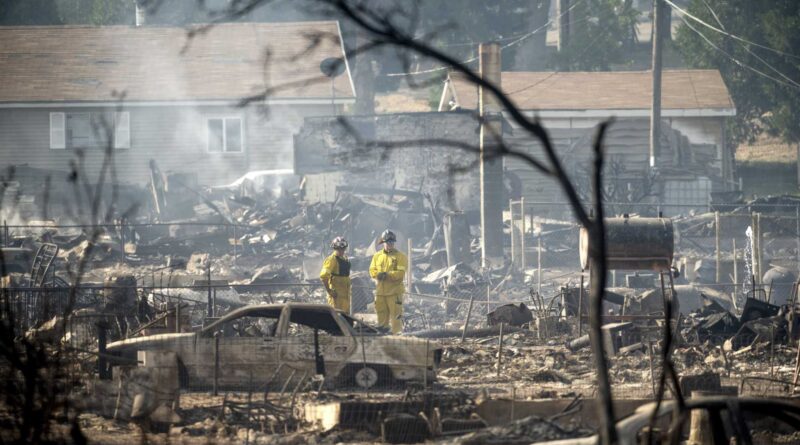 A terrifying scene unfolded Friday afternoon as California’s wind-whipped Mill Fire tore through tinder-dry vegetation and devoured homes surrounding Weed, a small town in Siskiyou County that’s 280 miles north of San Francisco. By Saturday, the winds had calmed and firefighters stopped the wildfire’s rapid spread, but the devastation from the day before became apparent. Wildfire photographers on the ground captured images of gutted cars, piles of ash that were once homes and the torched, blackened landscape.

It will take several days for Cal Fire to nail down exactly how many homes were destroyed on Friday. Cal Fire Siskiyou Unit Chief Phil Anzo said crews worked all day and night to protect structures in Weed and in a subdivision to the east known as Carrick Addition. He said about 100 structures were destroyed.

In its preliminary damage report, Cal Fire said that at least 123 structures were impacted, and as of Saturday night, 50 destroyed structures had been counted. (Cal Fire didn’t specify how many of those structures were homes.) The number will grow and shift as crews on the ground continue to assess damage.

“Damage inspection teams will begin ground truthing damaged and destroyed structures tomorrow,” Cal Fire said it in its report. “Numbers will be reported after they have been verified.”

The Mill Fire ignited Friday afternoon amid powerful winds and scorching temperatures, forcing more than 5,000 people to evacuate from the communities of Weed, Lake Shastina and Edgewood.

Wildfire photographers posted images of homes engulfed in flames and many residents took to social media to report that their homes were lost.

The fire grew minimally on Saturday. The blaze went from 3,921 acres on Friday night to 4,254 acres on Saturday night with 25% containment, Cal Fire said. In an operational briefing on Sunday morning, Cal Fire said it didn’t expect growth on the fire today and the goal was to control hot spots and get people home as fast as possible.

“The town of Weed has experienced devastation over the past decade,” said Cal Fire Division Chief Todd Hopkins. “So many people have experienced this before. Let’s get them back to their normalcy so they can start their lives.” (Watch the full briefing on YouTube.)

Weed has seen three major fires since 2014, a period of extreme drought that has prompted the largest and most destructive fires in California history. The winds make Weed and the surrounding area a perilous place for wildfires, whipping small flames into a frenzy.

The fire broke out at the front end of a heat wave bringing a prolonged period of abnormally high temperatures. Weed is forecast to be in the low to high 90s into next week. The mercury could push up to 100 degrees on Tuesday.

“Weather continues to be hot and dry with poor overnight relative humidity recoveries,” Cal Fire said in its report.

This is a carousel. Use Next and Previous buttons to navigate