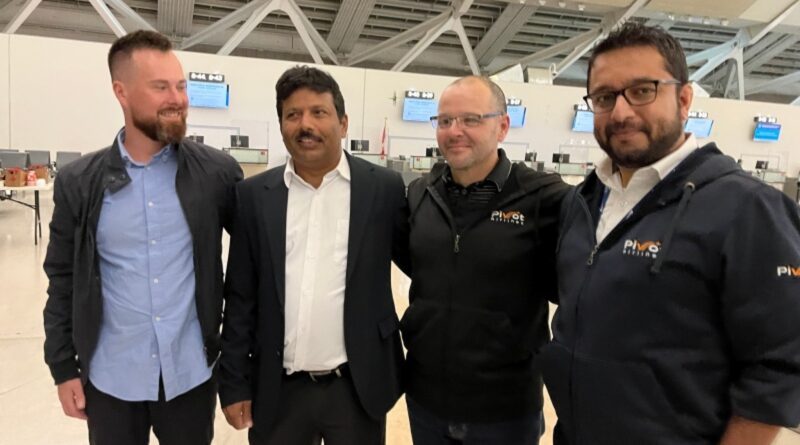 The five-member Pivot Airlines crew, who had been detained in the Dominican Republic for almost eight months, is now back in Canada.

An emotional airport reunion took place in a special pre-arrivals area of Toronto Pearson International Airport, as the two flight attendants, pilot, co-pilot and mechanic were greeted by family.

The crew touched down shortly after 7 p.m. Pilot Rob Di Venanzo was engulfed in a hug with his wife Melanie, who is also a pilot, and his teenaged son Tyler, telling them “This is surreal, it’s such a relief, I feel like the last couple of months the hope was gone.”

Mechanic B.K. Dubey, with his three young children holding him around his legs, said, “I can’t believe I’m home. I can’t express what it feels like.”

Flight attendant Alex Rozov told his partner Eduardo: “This is a dream come true. This man is my rock, my everything. I love you so much.”

Their ordeal began on April 5, shortly before takeoff from Punta Cana International Airport on a return flight to Toronto. With seven Canadian passengers on board the chartered plane, the crew discovered eight large duffle bags stuffed in the plane’s avionics bay. They immediately notified Dominican authorities and the RCMP back in Canada.

Inside the bags were 210 kilograms of cocaine.

Di Venanzo believes they averted an air disaster by making the discovery before takeoff.

“There is no doubt in my mind that had we got airborne or attempted to get airborne, we would have been in trouble,” Di Venanzo told W5, explaining that the avionics bay houses the plane’s computer systems.

“They are not aviation professionals who did this. They’re jamming bags up there with control cables and threats of fire. It would have been a literal disaster.”

The crew thought they would be celebrated as heroes, but instead were imprisoned for nine days before being released on bail.

Since then, they have been under virtual house arrest, without their passports, on a no-fly list, and living in fear of retribution for disrupting a major shipment of cocaine. Those fears meant being moved to five different safe houses and requiring 24-hour armed protection.

Dominican laws allow a suspect to be held for up to a year without any charges being laid. The crew says they were never once questioned by Dominican authorities.

It’s not clear why the case was suddenly dropped. When the District Attorney released the news on Nov. 11, Di Venanzo tied the decision to let the crew go home to the fact W5 was on the ground asking questions of the government.

“The timing was critical. We’re very thankful to [W5]. I think we were at a point where things had gotten stale. And I think the pressure you guys put down here was the difference-maker. We had a lot of good people working for us in our company, but I think you being here at this particular time may have been the deciding factor.”

In making the announcement last month, the Dominican District Attorney simply stated that there was not enough evidence to proceed.

There are still many unanswered questions about who chartered the plane and what plans were in place to unload the drugs, had they arrived at Pearson airport. It’s the subject of a W5 investigation, ‘Cocaine Cargo,’ which airs Dec. 10 at 7 p.m. on CTV.