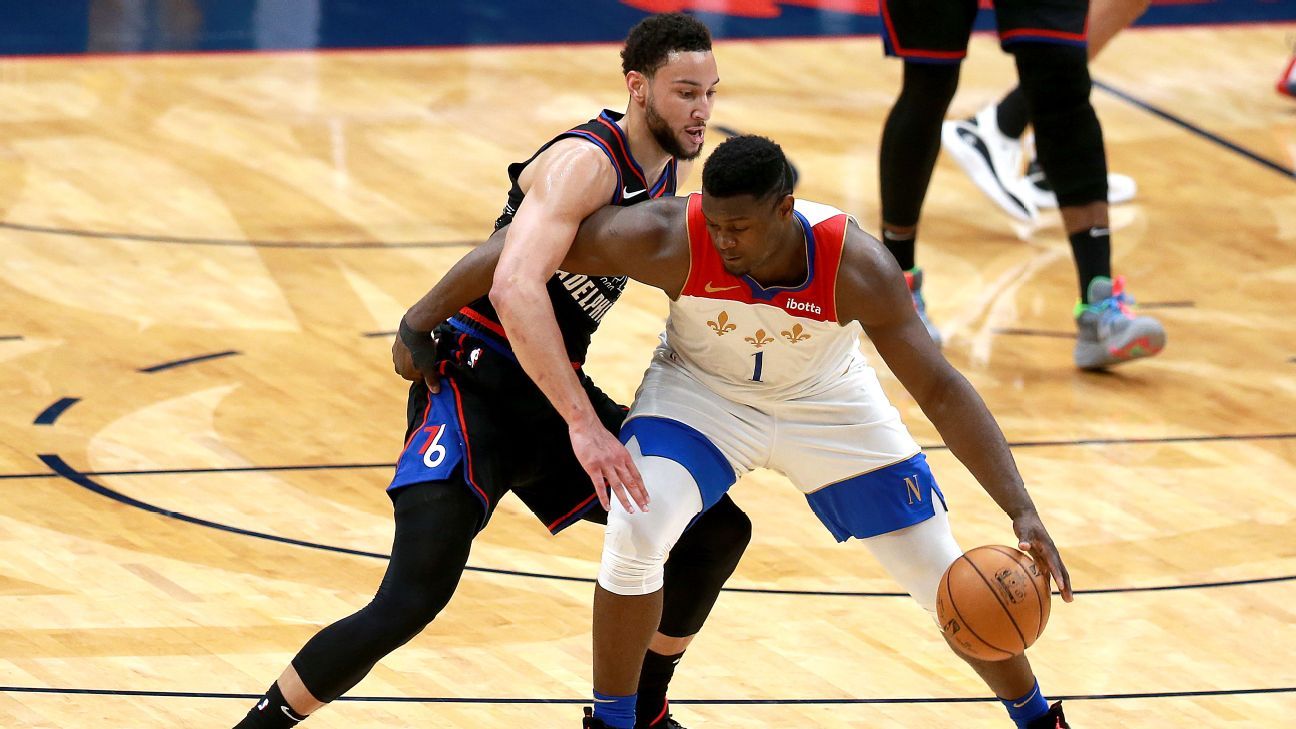 NEW ORLEANS — The New Orleans Pelicans’ experiments with Zion Williamson as their primary ball handler this season have mostly been relegated to him getting a rebound and pushing it up or the team going with it off of dead balls and free throws.

But Friday night against the Philadelphia 76ers, with starting point guard Lonzo Ball out with a hip injury, Pelicans coach Stan Van Gundy decided it was time for a heavier dose of “Point Zion.”

“Tonight, we just decided we were going to play him at the point all night,” Van Gundy said. “At least as long as he could go. He had the ball in hands all the time and the ability to make plays and everything else.”

The result was perhaps the best game of Williamson’s career: 37 points (two off his career high), a career-high 15 rebounds and a career-high-tying eight assists, all in a 101-94 win.

“He played the game the way you’re supposed to play the game. He was just tremendous,” Van Gundy said.

According to ESPN Stats & Information research, Williamson, 20, became the youngest player in league history to have at least 35 points, 15 rebounds and eight assists in an NBA game.

“It just feels natural to me,” Williamson said of having the ballhandling duties put on his shoulders. “I’ve been playing the game since I was 4. At this point, it just feels natural. I’m still learning, but certain things just feel natural.”

While the Pelicans really started to lean into Williamson as the initiator of the offense in early February, Friday’s game marked a big difference. According to Second Spectrum data, Williamson brought the ball up 35 times, the most he’s done all season. His previous best was 25. Also, he brought it up 12 times in the fourth quarter, tied for the most he’s had in a single quarter.

Williamson said his confidence has grown in the past two months and credits his stepfather, Lee Anderson, and Pelicans assistant coach Teresa Weatherspoon for that. Weatherspoon was also partly responsible for Williamson’s pull-up jumper on the baseline in the fourth quarter that sent the Pelicans’ bench into a frenzy.

“Yeah, I have that in my bag. I just, that’s what [Duke coach Mike Krzyzewski] said, that I want to be a perfectionist,” Williamson said. “I want to get the closest and easiest shot. But my teammates and especially T-Spoon. She said, ‘Z, just gimme one. If you don’t like it, you don’t have to shoot it again.'”

“When I shot it, it felt good. I liked the result, to be honest. She tells me every game, but tonight, she was like, just give me one. I tried. And it worked.”

While the Pelicans went to Williamson more out of necessity Friday with Ball out, it’s something New Orleans will go to more often anyway.

“We want to get him more experience with that stuff going forward because I think that’s where his future is in this game,” Van Gundy said. “I really do. “He just needs reps and more and more and we’ve increased it throughout the year giving him more and more opportunities. We’d like to give him more going forward. We’ll try to build some more things for him.”