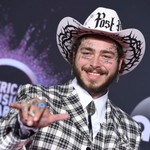 Malone added in his caption, “The festival will be 2 days this year and completely outdoors:) love you guys we’re so happy to be back @postyfest.”

News of this year’s Posty Fest comes nearly three weeks after Post Malone released his new song “Motley Crew,” with its speedy, race-car-themed music video. The song has so far peaked at No. 13 on the Billboard Hot 100.

Since the first Posty Fest in 2018, fellow artists including Travis Scott, Pharrell Williams, Meek Mill and Tyler the Creator have appeared at the event. Lineup details will be announced closer to the event.