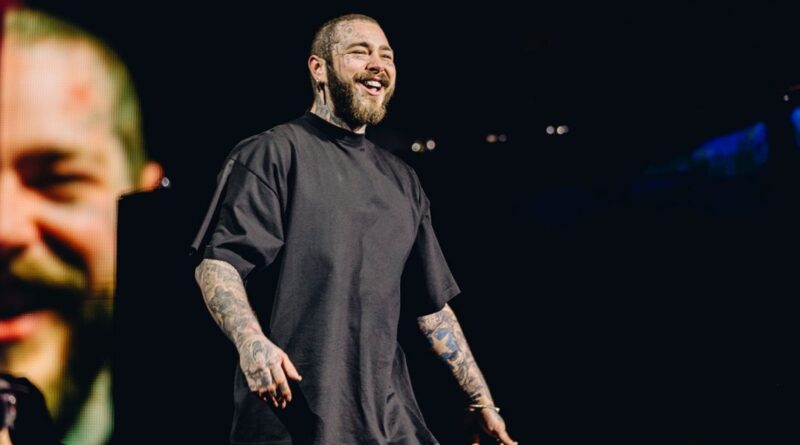 He’s just not sure whether she’s a fan of his music yet.

Post Malone, who’s “ready to keep rocking and rolling” after a recent stage fall and some hospital time, opened up a bit about his family life in a new interview.

The artist casually announced the birth of his daughter in June, noting that he intends to keep most details about his child private. “I want to let her make her own decisions,” he explained at the time.

In an interview with GQ published on Friday (Sept. 30), Malone brought up his 4-month-old while talking about his collaboration with Moose Knuckles for a collection that includes children’s sizes.

“It’s really tough not being able to see her, but she’s coming out more often now,” he said of being on tour. “She’s huge, she’s super tall, and she’s such a legend and I’m just happy to see her. But it is heartbreaking having to leave and not be able to be with her all the time.”

He commented that he “can’t tell yet” whether his little one enjoys his tunes.

“She hasn’t cried whenever I put my music on so far, which I think is a good sign, but we’ll wait and find out,” said Malone. “I got to let her decide. I tried to play her some stuff but I can’t really tell what she’s into right now. She’s going to have to like my music, I think, [or] she’s going to get used to it — I know everybody at the house plays it for her and hopefully, they’ll get stuck in her head. Kids love my music for some reason, which is awesome, so I’m hoping that she just goes with the flow on that one.”

One thing he probably doesn’t mind missing out on while he’s busy on stage?

“The blowouts,” he said, when asked about the craziest part of new parenthood. “She will blow out sometimes and it’ll come right outside of her pants. The poop will just be dripping out and I’m like, ‘What the hell happened?’ That’s how I know it definitely is my daughter — not that I have blowouts, but that I know my way around a toilet.”

Malone was forced to cancel a concert in Boston a week ago when he was experiencing “a stabbing pain whenever I breathe or move.” The health scare — which came a week after he took a nasty spill on stage at a St. Louis show — brought him to the hospital.

“We took a good three days off, we started healing up,” he said this week in his chat with GQ. “They gave me good medicine, all the lidocaine patches and everything, so I’m feeling a whole lot better.”