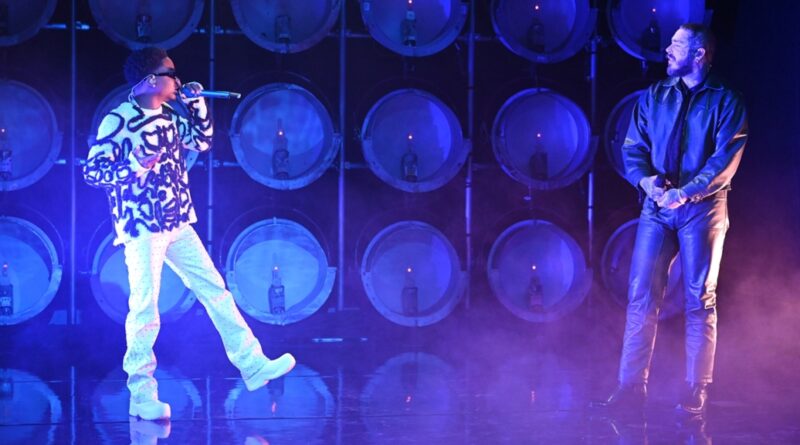 Post Malone becomes one of the 10 artists with the most No. 1s on Billboard’s Rhythmic Airplay chart as “Cooped Up,” featuring Roddy Ricch, tops the list dated July 30. The single advances from No. 2 after it gained 4% in plays to become the most-played song at U.S. monitored rhythmic radio stations in the week ending July 24, according to Luminate.

“Cooped,” released on Mercury/Republic Records, gives Post Malone his ninth champ on Rhythmic Airplay. Here’s a recap of his leaders:

With nine Rhythmic Airplay No. 1s, Post Malone joins the ranks of the 10 artists with the most leaders on the radio airplay list since it launched in 1992. He ties Beyoncé and Jay-Z for eighth place in the overall standings. Here’s a look at the current leaderboard of acts with the most No. 1s:

For Roddy Ricch, “Cooped” secures the rapper’s sixth champ on Rhythmic Airplay, exactly a year after his fifth, “Late at Night,” ascended to No. 1 on the July 31, 2021, list. To review his chart-toppers:

Elsewhere, “Cooped” returns to the top 10 of Rap Airplay after first cracking the tier two weeks ago. The song climbs from No. 11 after a 4% boost in audience.

“Cooped” appears on Post Malone’s latest studio album, Twelve Carat Toothache, which debuted at No. 1 on the Top R&B/Hip-Hop Albums chart in June and ruled for two total weeks.