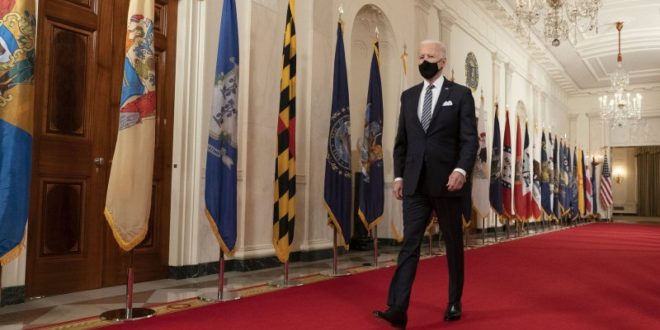 March 25 (UPI) — President Joe Biden is expected to face a range of questions Thursday in the first full news conference of his presidency — from COVID-19 to immigration to gun control in the wake of two high-profile mass shootings.

While Biden has spoken to reporters and answered some questions since taking office on Jan. 20, he has yet to turn out for a full question-and-answer session. The president is scheduled to hold the news conference in the White House briefing room at 1:15 p.m. EDT.

The Biden administration’s top priority has been getting the coronavirus pandemic under control in the United States. One of the first things Biden did after his inauguration was take action on this front.

Biden asked Americans to wear a mask for 100 days and pledged to vaccinate 100 million Americans within his first 100 days, a goal that was accomplished in almost half that time.

The goal was significantly aided by the administration spearheading an effort to create thousands of federal mass vaccination sites across the country — at convention centers, stadiums and other large facilities that can serve thousands of people a day.

Earlier Thursday, the White House announced that an additional $10 billion will be spent to expand access to COVID-19 vaccines and build confidence in the most vulnerable U.S. communities.

Although the pandemic has made mass shooting events in the United States far less frequent, Biden didn’t have to wait long before he was faced with his first high-profile attack. Two shootings in less than a week in Atlanta and Boulder, Colo., killed 18 people and spurred Biden to call on Congress to ban assault weapons and high-capacity magazines.

With Democrats holding a one-vote majority in the Senate, Biden will need to find Republican support for reform — or Democrats need to do away with the filibuster.

“We have been through too many of these,” Biden said of the shootings on Tuesday. “I don’t need to wait another minute to take common sense steps that will save lives in the future, and to urge my colleagues in the House and Senate to act.

“We can ban assault weapons and high-capacity magazines in this country once again. The United States Senate should immediately pass two House bills that would close loopholes in the [firearm] background check system.”

Biden is sure to face questions about the rising number of migrants who want to cross the U.S.-Mexico border now that President Donald Trump and his “zero tolerance” policy are gone.

More than 70,000 migrants were expelled at the border during February, Biden’s first full month in office, after a federal judge blocked Biden’s order to pause deportations to allow time for a review period.

Homeland Security Secretary Alejandro Mayorkas has defended the administration’s policy to allow unaccompanied children to remain in the United States and called the situation at the southwest border “difficult.”

Mayorkas said earlier this month that the number of migrants wanting to cross the border into the United States is on pace to reach a level not seen in 20 years.

On Wednesday, Biden made Vice President Kamala Harris his administration’s point person to manage the immigration crisis at the border.

“While we are clear that people should not come to the border now, we also understand that we will enforce the law,” she said. “We also … must address the root causes that cause people to take the trek.”

Biden is expected to face questions on significant matters of foreign relations, including China, Russia, North Korea and Myanmar.

Washington and Moscow have seen relations freeze this month after Biden acknowledged in a television interview that he views Russian President Vladimir Putin as a “killer,” which drew a strong rebuke from the Kremlin.

On China, administration officials met for the first time last week with counterparts from Beijing in Anchorage, Alaska, during which they traded barbs on issues like human rights, cybercrime and China’s regional reach.

In Myanmar, military rule is close to entering its third month after the government of Aung San Suu Kyi was overthrown on Feb. 1 and the civilian leader was detained and charged. The military junta orchestrated the coup on accusations that the election last fall that kept Suu Kyi in power was rife with fraud.

Biden announced sanctions against Myanmar’s military in February and denounced the junta takeover. The sanctions froze $1 billion worth of Myanmar’s government assets in the United States.