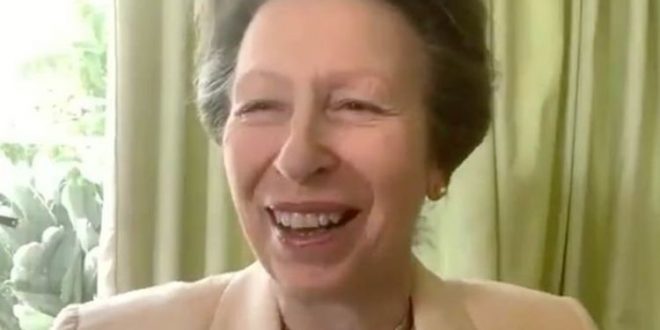 Princess Anne was left in stitches during a video chat with 99-year-old veteran Syd Pidgeon. Extracts from their conversation released by Buckingham Palace on Twitter this morning show a delighted Princess Royal listening to the memories of Mr Pidgeon.

The veteran, who served in Burma with the Royal Army Service Corps, confessed to Princess Anne a hope and belief he had prior to joining the Army.

Recalling his main duty on the Far East front, Mr Pidgeon said: “I was mainly supplying the comms, you know by air, dropping the supplies.”

Princess Anne asked: “So you were in the aircraft?”

To which the veteran replied: “We were in the aircraft, yeah.

Princess Anne was left in stitches as she spoke with a veteran ahead of the VJ Day anniversary (Image: THE ROYAL FAMILY/POPPY LEGION)

“When I joined the Army, I and another fellow joined with the belief that we would get a motorbike.

“When we got in, we got a three-tonne lorry!”

Following this blunt confession, Princes Anne was left in fits.

She replied: “Well, you should’ve joined the Signals, then, shouldn’t you?

READ MORE: Princess Anne heartbreak: Title Princess Royal could have to give up

“You’d have got a motorbike then!”

Princess Anne is the Colonel-in-Chief of the Army Logistics, the “forming corps” of which have been the Royal Army Service Corps.

The Princess Royal’s chat with Mr Pidgeon came ahead of the poignant commemorations held yesterday across the world to mark the 75th anniversary of VJ Day.

Princess Anne is patron of hundreds of associations (Image: THE ROYAL FAMILY/POPPY LEGION)

Prince Charles and Camilla at the commemorations for VJ Day (Image: GETTY)

Prince Charles led the country in the commemorations as he attended a service at the National Memorial Arboretum in Staffordshire.

Joined by the Prime Minister and officials, the Prince of Wales and Camilla, Duchess of Cornwall, listened to veterans recalling their memories of VJ Day.

After holding a two-minute silence, the prince also laid a wreath on behalf of the nation at the Burma To Siam Railway Memorial.

Princess Anne is the Queen’s only daughter (Image: EXPRESS)

The Queen also marked the anniversary by issuing a personal statement in which she recalled her own feelings of the day.

She wrote: “Those of us who remember the conclusion of the Far East campaign, whether on active service overseas, or waiting for news at home, will never forget the jubilant scenes and overwhelming sense of relief.

“Amongst the joy at the end of the conflict, we also remembered, as we do today, the terrible devastation that it brought, and the cost borne by so many.

“Prince Philip and I join many around the world in sending our grateful thanks to the men and women from across the Commonwealth, and Allied nations, who fought so valiantly to secure the freedoms we cherish today.”

While the Princess Royal is believed to have celebrated her 70th birthday privately at her home at Gatcombe Park, Prince Charles led the celebrations by sharing on Twitter a stunning clip.

The one-minute video featured several pictures of the Princess Royal with Charles, the Queen, Philip and Camilla thr