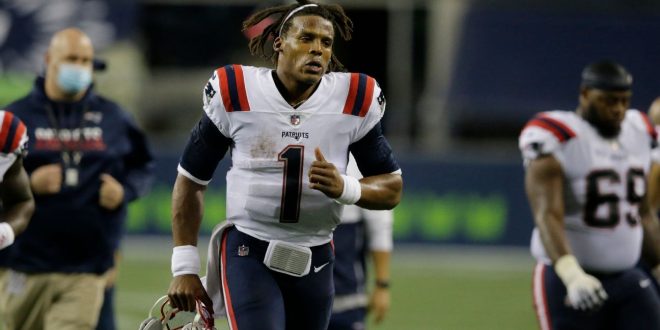 Quarterback Cam Newton nearly led the visiting New England Patriots on a vintage fourth-quarter comeback Sunday night against the Seattle Seahawks, but he was stopped on a designed run at the 1-yard line on the final play of a 35-30 loss at CenturyLink Field.

Newton was remarkable, finishing 30-of-44 for 397 yards with one touchdown and one interception. He added 47 yards rushing on 11 carries and two touchdowns.

His performance kept the Patriots in the game until the final play, in which he took a direct snap and attempted to power over the left side of the line of scrimmage but was stopped for a loss of 1 yard by defensive end L.J. Collier.

“That was favored in the game plan. We ran it a couple times and figured it was something we probably went to the well too many times. But at the end of the day, we felt confident about it and you just have to execute,” Newton said.

“I could have bounced it [outside], looking at the clip. I just have to be better at the end. We put ourselves in a position to win. When you do that, you just have to finish.”

In his career, Newton had been 16-of-20 scoring on rushing from the 1-yard line, according to research by ESPN Stats & Information. That included his two rushing touchdowns earlier in Sunday’s game.

“We had one play to score and we tried to go with what we thought was our best play,” coach Bill Belichick said. “Seattle made a good play.”

The Patriots didn’t disguise their intentions that Newton would likely run on the final play, as they didn’t have any receivers or running backs on the field. Instead, they added two extra offensive linemen, along with two tight ends and a fullback.

Asked if he sensed the Seahawks knew what was coming, Newton said, “No, I just didn’t make everybody right. That’s the only thing I regret. That type of situation, it’s humbling to be able to have the respect of a team to have the ball in my hands. I just have to deliver.

“I saw a clip of it. I could have made it right by just bouncing it. I was just trying to be patient. Just thinking too much, man. Or even just diving over the top. There are so many different things that flashed over me. Playing a fast defense like that, as soon as you guess, you’re wrong. So I definitely learned from this.

“The play was there. The play had been there all game. Moving forward, we just have to scheme up things, and me being put in that situation again, hopefully we can have a better outcome.”

That a Patriots-Seahawks game was decided at the 1-yard line is no surprise, as it has happened that way the past three times the teams have met.

In Super Bowl XLIX, Seahawks quarterback Russell Wilson was intercepted at the 1-yard line by Malcolm Butler to clinch a victory.

In 2016, the Patriots trailed by seven points and drove to the 1-yard line when Tom Brady threw incomplete to tight end Rob Gronkowski in the end zone with 11 seconds remaining.

On Sunday night, the Seahawks appeared to be in command, leading 35-23 with 4:32 remaining in the fourth quarter. But Newton heated up, leading a seven-play, 75-yard touchdown drive in just two minutes, 16 seconds. Newton capped off that drive with a 1-yard touchdown run, helping the Patriots close to 35-30.

With 2:16 to play, and with all three of their timeouts, the Patriots then elected to kick off instead of attempt an onside kick.

The strategy paid off when the Seahawks, on third-and-1, had Russell Wilson attempt a deep pass to Tyler Lockett — a curious playcall that sparked memories of their decision to throw at the goal line in Super Bowl XLIX.

That ultimately gave the ball back to the Patriots at their own 19 with 1:42 remaining, with Newton leading a ferocious charge down the field.

His favorite target overall was receiver Julian Edelman, who finished with eight receptions for a career-high 179 yards.

“Make no mistake about it, the Seattle Seahawks are a good football team. We are a great football team as well. It was great to kind of see where we [measured] up. We just fell short,” Newton said.

“The reason why you play this game is for one stat and one stat only. We didn’t get that statistic, that’s the win. For us, this is a disgusting taste in my mouth. I have to grow and get better in this offense, and hopefully have a better result next week.”