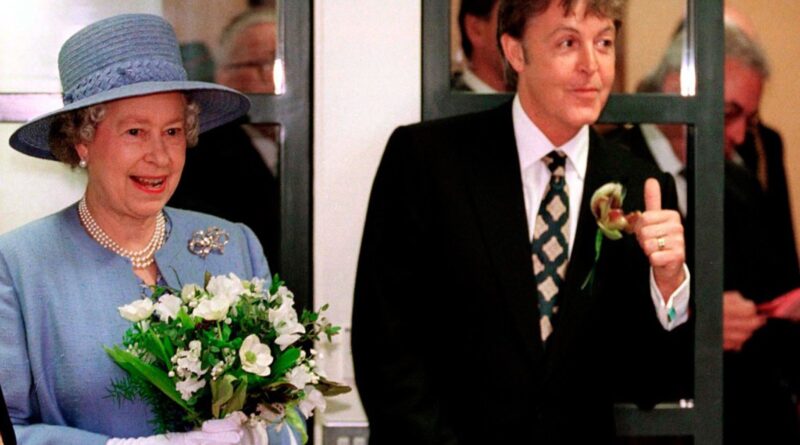 Queen Elizabeth II welcomed many a famous face into her royal presence over her lifetime, including the Spice Girls, Ed Sheeran and others.

The Queen with Paul Mccartney At The Liverpool Institute For Performing Arts .

Queen Elizabeth II welcomed many famous faces into her royal presence over her lifetime, always kindly shaking hands as she received celebrities at various concerts, celebrations in her honor and more during her 70-year-plus reign.

Over the years, the monarch — who died Thursday (Sept. 8) at age 96 — greeted musicians including Nat King Cole, Frank Sinatra, Liza Minnelli to Jennifer Lopez, Madonna, Ed Sheeran and more. Elton John, who shared a heartfelt message following the queen’s death, was one superstar who met Queen Elizabeth many times over, and even received the distinction of being knighted by her in 1998, just one year after the death of his close friend Princess Diana.

Other musicians who received CBE, MBE or OBE honors from Her Royal Majesty include all four members of The Beatles, Bono, David Bowie, Robert Plant, Brian May of Queen, Sting, Rod Stewart, Mick Jagger and Annie Lennox.

Queen Elizabeth also often presided over the Royal Variety Performance, a variety show televised annually throughout the U.K. to raise money for the Royal Variety Charity that brought the likes of the Spice Girls, Lady Gaga, Bette Midler, Kylie Minogue, Alicia Keys and Michael Bublé onto the stages of Royal Albert Hall, the Opera House Theatre and the London Palladium to perform for the monarch.

And though she was too ill to attend this year’s Platinum Party at the Palace as part of her celebratory Platinum Jubilee, the queen’s Diamond Jubilee back in 2012 was an equally star-studded affair attended by Sir Elton, Sheeran, Minogue, Jessie J, Robbie Williams and more.

Below, Billboard has rounded up some of the best memories of Queen Elizabeth meeting musical superstars over the years. Click here for celebrity reactions to her passing.