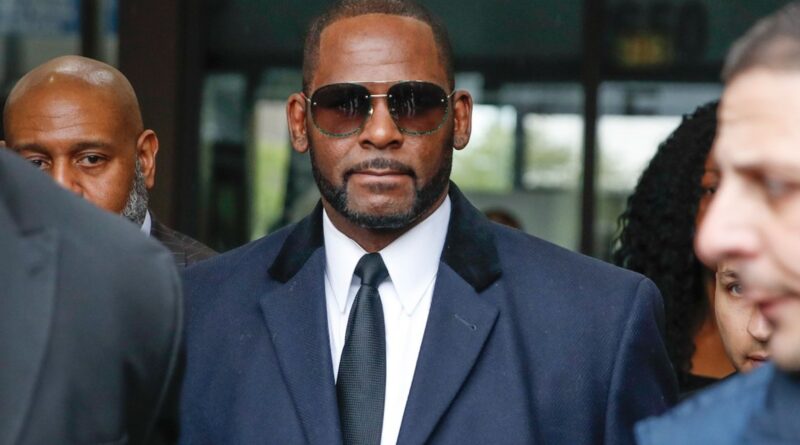 R. Kelly leaves the Leighton Criminal Court Building after a hearing on sexual abuse charges on May 7, 2019 in Chicago.

R. Kelly’s lawyers began mounting a defense Thursday in Chicago against federal charges of child pornography, enticement of minors for sex and fixing his 2008 state trial, with an initial witness contending the singer was himself a victim of blackmail.

The presentation to jurors won’t include Kelly taking the witness stand.

Judge Harry Leinenweber asked Kelly directly on Thursday morning if he would testify, and the Grammy Award winner responded that he would not.

The judge raised the issue minutes before attorneys for Kelly and two co-defendants began calling their first witnesses, endeavoring to counter two weeks of government testimony — including from four women who accused Kelly of sexual abuse.

Co-defendant Derrel McDavid, a longtime Kelly business manager, is accused of helping Kelly rig the 2008 trial, at which Kelly was acquitted. McDavid said he will testify. Co-defendant Milton Brown is charged with receiving child pornography. Like Kelly, he said he wouldn’t testify.

Testifying would have been risky. At times, Kelly has exploded in anger under tough questioning, which could hurt his defense.

He lost his cool in a 2019 interview with Gayle King on “CBS This Morning.” As she pressed him about accusations of sexual abuse, he jumped up, crying and gesticulating. “I didn’t do this stuff!” he shouted. “This is not me! I’m fighting for my … life!”

Lawyers for all three defendants are essentially sharing witnesses. McDavid’s legal team called the first defense witness, McDavid friend and former police officer Christopher G. Wilson. He testified that McDavid told him in 2001 that a merchandizing agent for Kelly, Charles Freeman, was trying to blackmail the R&B star.

Freeman testified earlier for the government that Kelly and his associates agreed to pay him $1 million to hunt down and return a video that featured Kelly, describing how he was handed bags full of cash as payment. He said the money was for services rendered, not an extortion bid. Prosecutors say the payments were part of a conspiracy to obstruct investigators leading up to Kelly’s 2008 trial.

Under cross-examination, Wilson conceded he didn’t directly witness anyone trying to extort Kelly, saying he was relying on what McDavid told him.

A conviction on just one or two of the charges at the Chicago trial could add years to a 30-year sentence Kelly already received from a New York federal judge in June for convictions on racketeering and sex trafficking charges.

Via witnesses Thursday, the defense also sought to raise doubts about the ages of a few accusers, saying at least one may have been 17, the age of consent in Illinois, at the time Kelly pursued her for sex.

There was nothing necessarily sinister about Kelly or his workers dealing in cash, another defense witness, former Kelly studio intern Tom Arnold, told jurors. Kelly rarely used his own credit cards and preferred cash transactions, added Arnold, who said he once carried $125,000 to Kelly in a backpack.

The highlight of prosecutors’ presentation was the testimony two weeks ago of a 37-year-old woman who used the pseudonym “Jane.” She described Kelly sexually abusing her hundreds of times starting in 1998 when she was 14 and Kelly was around 30.

Closing arguments are expected to happen in the middle of next week.