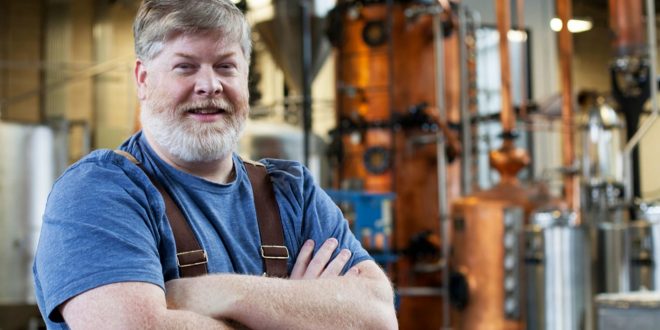 I was attending a distilling conference in Louisville, Kentucky, in the spring of 2015 when I got a message from Todd Leopold, half of the Denver-based Leopold Bros. and one of the more reclusive and accomplished craft distillers in the nation. Let’s meet for breakfast, he suggested.

We met early the next morning in the ornate lobby of the historic Brown Hotel. While awaiting our omelets, he pulled out his laptop, opened it, and swiveled it around to face me. On the screen was some sort of schematic diagram, showing inflow and outflow pipes and other inscrutable whatnot.

“It’s a triple-chamber still,” he said. “Oh, right,” I replied. I had no earthly idea what he was talking about, but the triumphant tone in his voice suggested that I should pay attention. (It was April 1, but Leopold didn’t strike me as a prankster.)

He first came upon references to a three chamber still in a 1907 document published by the laboratory of the Internal Revenue Service. (This is typical weekend reading for Leopold, who loves distilling arcana.) Further research led him to believe that it was a common type of still used by distilleries throughout the country more than a century ago. Even more research led him to conclude that this still design had gone extinct—no distillery had employed one in decades. “It completely disappeared,” Leopold said. And he wondered: why?

To know what happened next, you have to know more about Leopold other than that he reads antiquated IRS documents in his free time.

Leopold is an imposing and bearded man with hands like catcher’s mitts. His standard outfit involves Carhartt overalls and his preferred habitat is his distillery in a tidy industrial park midway between downtown Denver and the city’s airport.

Leopold is at times described as “bear-like.” But never a mean bear, like a kodiak or a grizzly. More like a shy black bear, hiding behind trees with his head stuck in a honey pot. His head got stuck not because he was greedy for sweets, but because he was just curious about what honey tasted like.

Leopold is what you get when you mix someone with a liberal arts curiosity, an aptitude for science, a fondness for mechanics, a strong appreciation for adult beverages and a bit of a nerdy streak. (Also, it doesn’t hurt to have a brother who is adept at the business side of distilling, which has let Todd make liquor away from the toxic fumes of financials and spreadsheets.)

He likes the company of copper and gauges more than back-slappers and idle talkers. As such, he rarely goes to conferences, but he came to Louisville in 2015 to accept an award—he’d been named “Distiller of the Year” by the American Distilling Institute. And while he was there, he figured he’d meet with Vendome Copper & Brass Works and ask about the extinct three chamber still.

Leopold and his brother, Scott, got their start with a craft brewery in Ann Arbor, Michigan, which opened in 1999. They strove to create an environmentally friendly brewpub with (unrealized) plans to pipe carbon dioxide that resulted from fermentation into an adjacent greenhouse. Environmental instincts run in their blood—their great-granduncle was pioneering conservationist Aldo Leopold. They later added a distillery, and began dabbling in strong drink. In 2008, facing an unsympathetic state bureaucracy and a sharp rent increase, they decamped to Colorado, fetching up not far from their hometown of Boulder.

They started out in a leased industrial space with an unmarked door they rarely answered. While tinkering with fermented fruits and grains, the Leopolds noticed in their travels that many high-end restaurants were touting the farms where their food was lovingly raised, but their liquor selection never reflected the same care with ingredients. Instead, they featured things like lurid green “apple” liqueur. “In those days I didn’t even stop to talk to bartenders because they didn’t know anything about spirits,” Leopold said. “So we’d pitch to the chefs.”

That changed in the late aughts. Bartenders started asking them good questions about fermentation and bacteria and the provenance of grains. The Leopolds were in the right place at the right time. They soon outgrew their first distillery and built their own four blocks away. They installed large windows that opened wide next to the fermenting vats, and designed airflow such that it would pull outside air in from the adjacent garden and orchard designed to encourage pollen, wild yeasts and microbes. (The fruits produced by the trees are left to drop and rot, creating natural petri dishes for microbial goodness.) All this was to create what Leopold called a “house note”—a distinctive flavor that would persist over time as it became an ingrained part of the living wooden vats.

The Leopold brothers have long attracted attention for their superior liqueurs and spirits, including their rustic Maryland-style rye, Michigan cherry whiskey, New York sour apple liqueur (note: not bright green), and a range of gins and other liqueurs, including a fernet.

But with his background in brewing, Leopold has had his fiercest dalliance with whiskey, especially malt and rye. He had read that the most common rye used in making American whiskey was once Abruzzi rye, which grew about two feet taller than more common rye varietals. He found a Colorado farmer growing it, and inquired if he could buy some. The farmer asked, “You using this for whiskey? Nobody’s used that since I was a kid.” That, Leopold said, “was when I knew I was on the right track.” It requires 30 percent more grain to make the same amount of alcohol, but what results is layered with complex flavors.

The Leopolds built a rickhouse with an earthen floor and drip irrigation around the foundation to create humidity in the dry Colorado air, slowing evaporation while concentrating flavor. Also based on information gleaned from the IRS document, he opted to fill his barrels with 100-proof distillate—less than the usual barrel entry proof. That meant he needed more barrels than he would otherwise, but with more expense came more flavor.

Leopold had studied distilling in Europe and while abroad learned about floor malting—a traditional process of partially sprouting grain to convert starch to sugar, which was slower than modern processes involving industrial-sized drums and kilns. “I had all this knowledge and nowhere to put it,” he said. So, he built a floor-malting operation, which requires hand-turning the grain but yields a more robust whiskey flavor. “It makes better flavors because it’s not strictly uniform, is the easiest way to explain it,” he said. “It’s the difference between Wonder Bread and bread coming out of a wood-fired oven.”

If there was part of the distilling process that could be tampered with—and the output improved—Leopold would cobble something together and see what happened. “I get some of my best equipment from Bed Bath & Beyond,” he said. “It’s hard to get a big head when you’re buying equipment next to the throw pillows.”

But Bed Bath & Beyond wasn’t much help when Leopold sought to replicate the three chamber still. So he approached the legendary still builders at Vendome with his small schematics and big idea. They didn’t immediately embrace his vision and weren’t convinced that the thing would actually work. Ultimately, they agreed to make him his 20-foot still, at a price Leopold said that “was not cheap” and freighted with one key proviso: if the still failed, it was on him—no refunds offered.

The three chamber still design was unique in a couple of ways. First, it was vastly inefficient. Most stills can be fired up and left unattended for a while, or run remotely. The three chamber needs a full-time babysitter. Leopold said they bought their early morning distiller a Netflix subscription because he can’t leave the still’s side. “He’s making choices every ten or 15 minutes,” Leopold said. Modern column stills can be run by someone with a laptop and a mouse in a distant room.

But the three chamber still was also different in that it produced what Leopold called “massive, massive flavor.” It essentially creates three distillations that are then combined, including a water distillation, which captures compounds that may be less soluble in alcohol. And the water distillation is done under higher pressure, creating what Leopold describes as “an oil-extraction machine.”

“To me it’s the oiliness and the mouthfeel and the finish that goes on for days,” he said. “You don’t have to understand all of this in order to know, boy, the flavor is different, the aroma is different, the finish is different.” (Whiskey nerds, rejoice: my Half Full colleague David Wondrich is writing an in-depth investigation into the history and workings of a three chamber still. Watch this space.)

The three chamber still is a remnant from days when efficiency wasn’t king—a still house might have an efficient column still to produce a light-bodied whiskey, which they’d then blend with a smaller amount of the three chamber whiskey to give it depth and body. (One other three chamber still has turned up: a disused unit among the other stills found at the West Indies Rum Distillery in Barbados, which was purchased by Plantation Rum. Plans call for resurrecting it.)

Leopold said the 1907 IRS document was his Rosetta Stone, offering glimpses of how a distillery produced whiskey in the late 19th and early 20th century. Then Prohibition came along and “ripped everything out,” Leopold said, and after Repeal the art of distilling largely changed. What was once an agricultural practice became an industrial one. “Prohibition ended in the middle of the Great Depression, and nobody had money for copper,” Leopold said. As a result, large-scale industrial production took over. That shift was compounded by a change in consumer taste: “Everything went bland in a big hurry.”

The Leopold Bros. Three Chamber Rye Whiskey has been aging for about four years. When we spoke in March, he was awaiting an order of shrink tops, which have been facing covid-related delays, and he anticipates the first bottles will be sold at the distillery this month, and then gradually rolled out around the city and the state before heading to other markets where Leopold Bros. spirits are sold.

The sale of Three Chamber Rye Whiskey will mark the first time most whiskey drinkers will be able to sample the rye their forebears drank several generations ago. It’s a taste that’s been lost for at least half a century. Leopold said that those who’ve tasted it immediately understand why he went to the considerable effort to recreate an antiquated still. “Which is great, because that means my brother doesn’t have to fire me,” Leopold said. “If we went to all of this trouble and this just tasted a little different, that would have been utterly pointless. But it is truly is different, and we’re excited to see what the world thinks.”