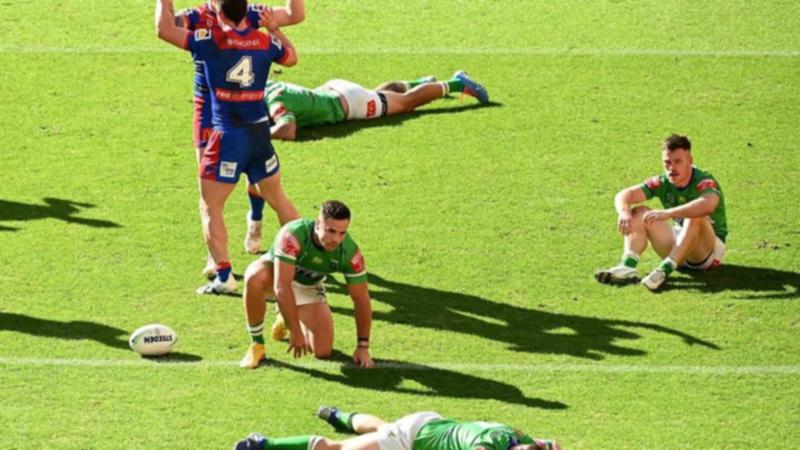 The return of youngster Bradman Best has sparked Newcastle to a comprehensive 34-24 NRL win over Canberra.

The 19-year-old, making an early return from an ankle injury, scored a try and set up two more for winger Enari Tuala as the Knights ended a two-game losing run at an empty Suncorp Stadium.

The clash had been rescheduled from Saturday due to southeast Queensland’s snap COVID lockdown.

Tuala was the beneficiary of Best’s dominant presence on the Knights’ left-hand side, claiming the first hat-trick of his NRL career.

The Knights centre ended the game with five tackle busts and a linebreak in a sensational display.

Another Knights superstar, fullback Kalyn Ponga, sealed the win with their sixth try of the match when he broke through a tired tackle by Corey Harawira-Naera and sprinted clear.

Ponga had two try assists in a strong display while halfback Jake Clifford also set up a couple of tries for the Knights.

Victory keeps Newcastle firmly in the finals hunt, moving them to 18 points along with the Raiders, Sharks and St George Illawarra.

The loss ends a three-game winning run for the Raiders with reigning Dally M medallist Jack Wighton unable to make an impact on his return from a rib complaint.

The only highlight for Canberra was captain Jarrod Croker passing Johnathan Thurston to become the third-highest points-scorer in first-grade rugby league history with his four conversions.

Defeat leaves the Raiders outside the eight on differential heading into next weekend’s crucial clash with the Dragons.

The Knights have a four-day turnaround before taking on Brisbane on Thursday.