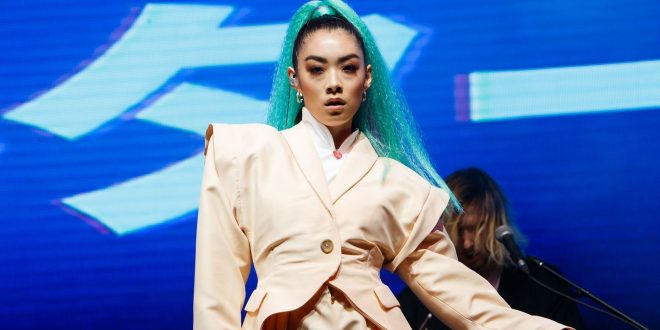 “Where do I belong?”

This question opens Rina Sawayama’s touching and heartfelt “Chosen Family,” and it is one that far too many LGBTQ+ people have had to ask themselves as they navigate existing authentically in a world that still largely sees them as “other.” The query pops up constantly in the lives of those who identify as part of the community, as they can so often feel uninvited, unincluded, or unwelcome at school, in the workplace, or worst of all, at home. According to the Trevor Project, queer youth are “almost five times as likely to have attempted suicide compared to heterosexual youth.”

“I lost relationships with quite a bit of my actual family after coming out, which was devastating for me at the time,” explained Elvis, a queer 23-year-old Sawayama fan from Dallas, Texas. “But over the years I’ve been blessed to meet people that I’m lucky enough to now know as my chosen family.”

Elvis is one of many young people around the world who have found solace in Sawayama’s “Chosen Family,” an ode to dedicating love and attention to those who deserve it, no matter where they come from. As the singer croons on the chorus of the budding LGBTQ+ anthem, “We don’t need to be related to relate / We don’t need to share genes or a surname.”

“Chosen Family” is featured on the Japanese-English singer-songwriter’s debut full-length Sawayama, which was released in mid-2020 to widespread critical acclaim. The 13-song set is one of the most diverse releases in the pop field in terms of genre exploration, as the musician jumps from late-‘90s teenybopper pop to nu-metal to balladry. That might sound like a mess, and in the hands of someone less skilled, it probably would be. Thankfully, Sawayama pulls the whole thing off brilliantly, and her ability to encompass so many styles and references into one project and make it all work sets her apart.

“Chosen Family,” the slowest song on the full-length, has been a fan favorite since it dropped, but it recently grabbed headlines as it was re-released as a duet with none other than Elton John. “‘Chosen Family” is like a hymn,” the pianist told the New York Times’s T Magazine in a joint interview with Sawayama. “You can hear it being performed by a gospel choir.” The track was written specifically for the LGBTQ+ community, but with the knighted legend on board, it is reaching new audiences everywhere. John’s celebrity has surely helped it spread across the globe like never before, to places where some fans desperately needed to hear it.

“I’m not close to my parents at all. I’m not out to them yet,” confessed Shoval, a 21-year-old lesbian living in Tel Aviv. “They’re religious and I’m not feeling ready right now.”

Upon hearing “Chosen Family” for the first time, Shoval says she “felt so understood and safe, and the tears started immediately. I was thinking about my chosen family, my closest friends… ‘Chosen Family’ is our song, our safe place.”

This is, unfortunately, not an unusual story. The Washington Post reported in 2017 that 1.6 million young people experience homelessness in the U.S. every year; 40 percent of them identify as LGBTQ+. To put that figure into perspective, at the time, LGBTQ+ youth represented just 7 percent of the overall population. Countless people like Shoval sometimes have to decide between being open and honest with those they love about who they really are or remaining a member of the families they were born into. That sad fact is what drove Sawayama to pen the song.

“The concept of family has broadened for me over the years,” Sawayama told MTV News in 2020. “I think a lot of queer people especially, they need to broaden their definition of family. Often you see your family and it’s not what Hollywood shows you — it’s not the happy nuclear family unit. But you can grow your own family, make your own happiness. I have my queer family, I have my touring family, I have my label family. There’s beauty in knowing that you can have a much wider family that’s not just biological.”

“Chosen family has been a queer concept for a long time,” Sawayama explained further to Pitchfork. “I know people who have been kicked out of their house because they came out, and the song is all about accepting each other for who they are.” The idea of being ostracized from one’s family for such an admission is still foreign to many straight people. In fact, Sawayama claims that there have been times she’s shared the tune with others who assumed it was simply about finding someone to marry, while the true meaning is immediately clear to members of the LGBTQ+ community.

While she may not have landed any major wins on charts, broken any streaming records or even seen any of her releases go viral on TikTok, Sawayama now counts millions of young people all around the world as fans. She was planning on touring her self-titled album in 2020, but like so many other musicians, she was forced to cancel the trek after COVID-19 spread like wildfire around the globe. Now, she has another venture planned for spring 2022, one that will take her to various countries in Europe and quite a few cities in North America. Amazingly, even though it’s almost a full year away, many dates on the upcoming tour are already sold out.

In addition to the co-sign from John, Sawayama has also received Lady Gaga’s stamp of approval, as she’s set to be featured on the “Rain on Me” hitmaker’s upcoming Chromatica remix album. Details about the project are scarce, but there’s even a rumor she may open for Gaga on her oft-postponed Chromatica Ball tour, which Sawayama herself has publicly stated is an “actual lifetime goal.”

It’s not really shocking that Gaga wanted Sawayama on board, as the two occupy a similar space in the pop world. They’re both critical favorites, they both allow their rock-and-roll spirit to be heard in the music they create, and they both court the LGBTQ+ audience because they identify with them and respect them deeply. A decade ago, Gaga landed a worldwide hit with “Born This Way,” the first song in U.S. history to rise to No. 1 on the Hot 100 that mentions the transgender community. Now, Sawayama has joined her with “Chosen Family,” not by reaching the top of any chart, but by producing a piece of work that shoots right for the heart and describes something not often brought up in mainstream music. There are many songs that talk about self-acceptance, of loving oneself and being true to who you are, but Sawayama’s latest single addresses one of the darkest realities facing the LGBTQ+ community, and in doing so, she has helped more listeners than she may ever realize.

“Chosen Family” producer Danny L Harle, known among underground pop fanatics as one of the pioneers of forward-thinking collective PC Music, said he “couldn’t be happier” with the response the song has received, including fans who have sought meaning in it while enduring displacement. He told MTV News that he’s “so glad that it helped people in a situation like that” before expressing dismay that some families still turn their own away simply for being LGBTQ+.

Daisy, a 17-year-old resident of Southampton, England summed up the impact of Sawayama’s single beautifully: “‘Chosen Family’ feels like a warm hug to me; a song that washes away all of the fear and anxieties that I may have surrounding my identity. The idea of creating your own chosen family is such a crucial and reassuring message, especially to those with experiences like mine who have been outed/disrespected/rejected by those they thought they could trust as a result of coming out.” The track’s impact on so many young lives is clear, and Daisy’s final comment is one Sawayama surely wishes for all her fans: “I have never felt more happy about my sexuality than I currently do.”