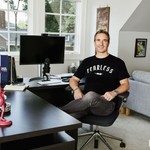 A DJ in his college years, Vlassopulos got his start helping the music business adapt to the digital era: He led business development at BMG in the late 1990s, then managed entertainment partnerships at AT&T Wireless when ringtones were the rage. He joined Roblox in August 2019 with a plan to socialize the music-listening experience through games. “We had gotten stuck in a bit of a box with [digital service providers], and it felt like there was more opportunity to have a [listening] experience that was hyper-social,” he says.

For Roblox’s first-ever virtual concert in November, Lil Nas X wore a motion-capture suit to live-debut his single “Holiday” as an avatar in a winter wonderland, attracting 33 million total views across four airings. Since then, Roblox has only deepened its musical footprint. Warner Music Group joined the platform’s $520 million series H investment round in January, and over the summer, Sony Music Entertainment and BMG each formed partnerships to bring their artists into the game. Roblox, which went public in March with a $41 billion valuation, reported $454 million in revenue in the second quarter of 2021, a 127% year-over-year increase.

“After the big success of our first virtual concert with Lil Nas X, our [motion-capture] production partner got these amazing statues done. This was his avatar from Roblox.”

Along the way, Roblox has faced criticism from the National Music Publishers’ Association, which, on behalf of more than a dozen publishers, alleged in a $200 million copyright infringement lawsuit filed in June that the platform is hosting a “massive” library of unlicensed songs uploaded by users. Vlassopulos says Roblox is discussing the plaintiffs’ claims with the NMPA, which declined to comment, although both sides are hopeful for a resolution. He also points out that the platform has agreements with three of the four top publishers.

The company is also up against stiff competition from gaming platforms like Fortnite, which has put on musical spectacles with Travis Scott and Ariana Grande. But as Roblox racks up partnerships with fashion brands and TV shows — including Gucci and Stranger Things — alongside labels, Vlassopulos is optimistic about his vision: turning Roblox into an experiential hub akin to Las Vegas.

“It’s our responsibility to have a place where if you are a music fan, you should have all different types of experiences that fit your interests,” he says. “There should be hundreds of shows every day.”

What sets Roblox apart from other virtual spaces?

Roblox is social media for the next generation. We’re a real-time, daily social experience. The objective is not to compete in a game for 100 hours. You’re there to meet friends, hang out, shop, unlock things.

How do your music events build on the traditional live experience?

Virtual fans can be piped in to watch a physical event, and physical fans are piped into the virtual world. It’s extending both what’s happening with [streaming] — which is a very antisocial, individualistic consumption experience — and the live experience. And there are no limits. Artists don’t have to spend 18 months reaching 2 million people on a world tour. They can do it on a Friday night.

How does Roblox collaborate with artists and labels on set and virtual merch design?

We’ll look at physical merch they’ve done, talk about the aesthetics of the album or song that’s coming out and draw things from that. KSI is a boxer, so we have a boxing belt. The aesthetic of the virtual world is similar: There’s a boxing ring where the performance happens.

“Hands down, my favorite David Bowie live recording,” says Vlassopulos. “I listen to it as much as I can.”

What makes virtual merch such a lucrative opportunity?

We’re a microtransaction platform. The community is used to spending 100 Robux, 200 Robux, 500 Robux — [about] $1, $2, $5. Lil Nas X is on a path to eight figures for an annual run rate [for his Roblox merch collection]. And there’s no inventory or manufacturing. We can all go on holiday for a month, come back, and the community has been buying every day. For the artist, that’s almost like catalog sales.

How are artists and labels compensated for virtual events and merch? Are you paying artists to perform?

It’s almost the other way around, where they’ll cover the cost of activating and often also spend media dollars to support it. Think of us more like the executive producers. We haven’t done that many [virtual merch] deals, but 24.5 cents on the dollar is our general platform revenue share.

“A great book that gives insight into the magical, colorful world of Roblox lore.”

Roblox users are predominantly between the ages of 8 and 18. Does this affect what artists and songs you’re able to work with?

We need to be protective of the community. The artists and labels are flexible. If there is a word [in the lyrics] that’s not appropriate, they can choose another word. With Lil Nas X, certain lyrics went above my head, like, “Lean all in my bladder.” But we don’t want to be doing Kidz Bop, which is what people were pitching in the beginning. So there are things coming that will offer more of an older demo opportunity. There will be [age confirmation and ratings] where, if you are older, you can experience things that are more suitable for your demographic.

What else is in the future?

We have an opportunity to bring a radio-type experience to the platform. If you go to a city, you hear music in a shop. We have this metaverse parallel. Right now, it’s a quiet experience. But why shouldn’t there be music in the background? That would be a great way to promote music to tens of millions of people every day.

“Between meetings, I often take five and throw some arrows. I’m slowly getting better.”

That would require the proper licenses, and Roblox has been criticized for its approach to music licensing. Roblox has said that the NMPA doesn’t understand how Roblox uses music. What don’t they get?

You’ve got some platforms where music is essential. Think TikTok. Roblox has functioned for 15 years quite happily without music. We’re presenting the industry with a new opportunity, which is now almost universally understood. I think it’s about working out, collectively, what those new creative and commercial opportunities are, and then getting licensing models that support those. We’re optimistic about resolving any disputes in the short term.

Users were once able to buy a boombox for their avatars, fill it with clips of unlicensed songs and broadcast them in games. What are you doing about that?

Dance label Monstercat independently launched a Roblox game in July, drawing over 1.2 million visits in its first 24 hours. Why are you encouraging artists and labels to leverage Roblox on their own?

This article originally appeared in the Aug. 28, 2021 issue of Billboard.