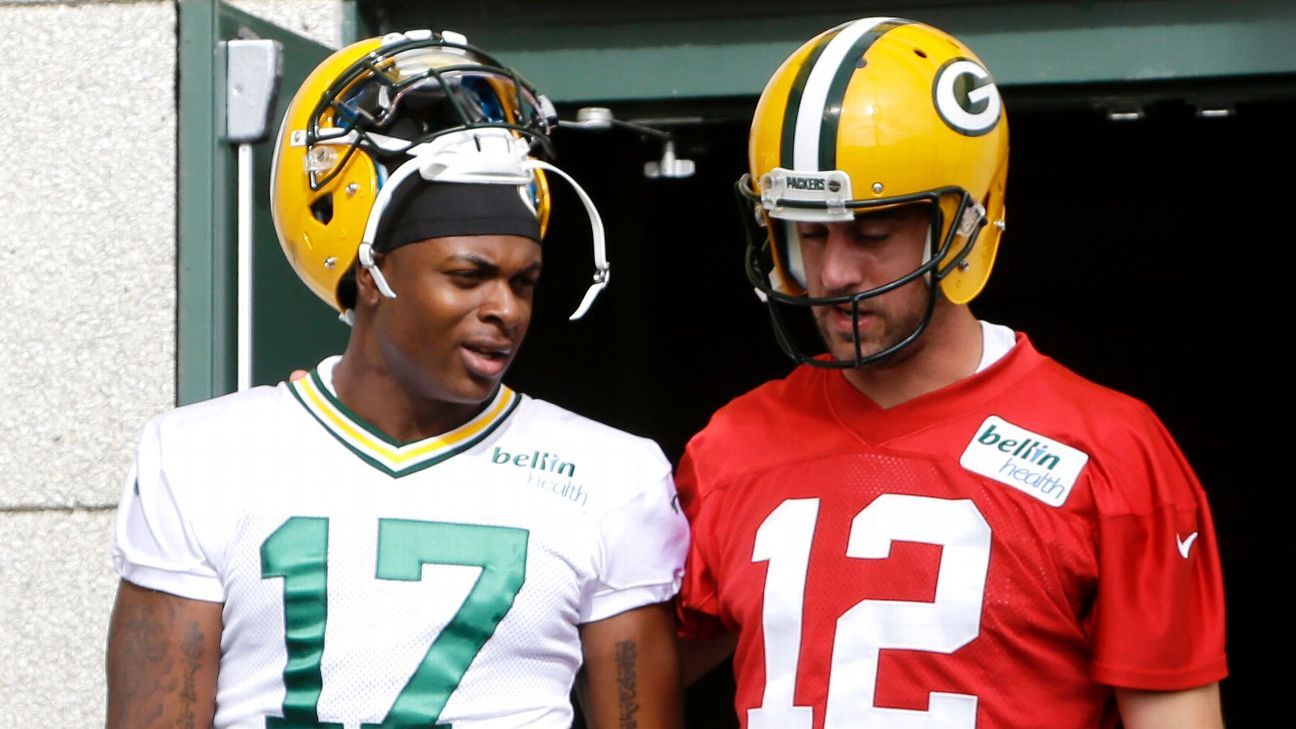 Rodgers’ Packers teammates: We’ve got his back

GREEN BAY, Wis. — Aaron Rodgers hasn’t lost the backing of two of his closest friends and teammates as his standoff with the Green Bay Packers continued with his absence from the team’s mandatory minicamp.

All-Pros Davante Adams and David Bakhtiari threw their support behind their quarterback, while also making sure not to criticize the organization they’re still bound to contractually.

“I’ve got his back through everything so he knows that, at the end of the day, if there’s ever a wonder if he’s lost a teammate or something because of all that’s come out, he knows where I stand,” Adams said Tuesday. “I’ll stand on the f—ing mountain and scream on the mountaintop that I’ve got his back.”

Adams added that he doesn’t think by siding with Rodgers that he’s necessarily criticizing the organization.

“I think that any GM, any president, any owner, they should want the type of guys that are backing their players, especially a player like that,” Adams said. “That’s just a good trait to have. It’s not like I’m saying, ‘Forget the front office,’ like I don’t respect what they have going on.”

For Adams, it was his first appearance in Green Bay since the offseason program began. He skipped OTA practices but said he did not organize a boycott among the receiver group. The top-five returning receivers all stayed away until this week’s mandatory minicamp. Although attending now, Adams did not do much in practice, instead working off to the side.

Bakhtiari, the left tackle who spent part of his offseason with Rodgers at the Kentucky Derby, said he would not try to influence Rodgers’ decision on whether to return to the Packers.

“For me, I care about Aaron Rodgers from a friend perspective,” Bakhtiari said. “Whatever he wants to do, whatever the situation that comes out, I will never hold any grudge against him. That is my friend. That is someone that I have appreciated, and he has done a lot for this organization and a lot for me as an individual.

“Now, as a teammate I would be idiotic to say that I don’t want the MVP back. He’s the MVP of the league last year. He’s done amazing things as from the quarterback perspective, our quarterback position, but not only for the franchise. So absolutely.”

Bakhtiari, who is coming off a torn ACL on Dec. 31 and thus worked off to the side during practice, said he has told Rodgers that he would support him in whatever he decides.

“I’ve definitely voiced to him, I’m like, ‘You know what, whatever happens, look, it’s out of my control [and] the situation is between you and the organization, and that’s where it’s going to stay,'” Bakhtiari said. “‘I don’t want to, at all, in any time, get in the middle of that. I respect you as a friend and however that turns out, I’m not going to take anything personally.'”

Packers coach Matt LaFleur would not say whether the team would excuse Rodgers’ absence from minicamp and thereby waive the fines he’s subject to. The Packers could fine Rodgers up to $93,085 for missing the three-day camp. The fine for missing the first day of camp is $15,515, with subsequent fines of $31,030 for Wednesday and $46,540 for Thursday.

However, Rodgers was the only player who was considered a minicamp holdout. It’s the first time in his career that he has skipped the mandatory minicamp.

“You’d love everybody to be here,” LaFleur said. “It is what it is, man, and we’ll focus and we’ll control and work on the guys that are here and try to help them become the best to their ability and coach the heck out of them.”

Without Rodgers, the Packers gave the majority of the No. 1 quarterback reps to Jordan Love, just as they had during OTAs. Love struggled with accuracy on Tuesday, missing several throws, and failed in his only attempt at the two-minute drill.

“He needs every rep he can get right now,” LaFleur said of Love. “He’s a young quarterback that was not afforded a preseason last year, and so we’ll give him as many as he can handle. We’ll spell him every now and again, but I just think every rep that he takes is so valuable, and he can learn something from both the good and the bad.”