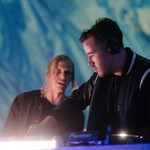 One of those tracks is “Alive,” which the act performed for late-night TV, by way of a pre-recorded clip from Red Rocks Ampitheatre, filming during a two-night sold-out run earlier this month.

“It was very surreal,” recounts bandmate James Hunt. “There was a lot that made it a very crazy moment for us. We hadn’t played a show for 18 months, I guess the crowd had been waiting a year.” When Rüfüs Du Sol (formerly Rüfüs) was up on stage, it “felt like actually a dream,” he explained.

Solace peaked at No. 6 on Top Dance/Electronic Albums chart and reached No. 2 on the Heatseekers Albums chart and the ARIA Albums Chart. Previous LPs Atlas (from 2013) and Bloom (2016) went to No. 1 in Australia.

Rüfüs Du Sol will support the new effort with a previously-announced headline run at L.A.’s Banc of California Stadium this November.

Watch the performance below.