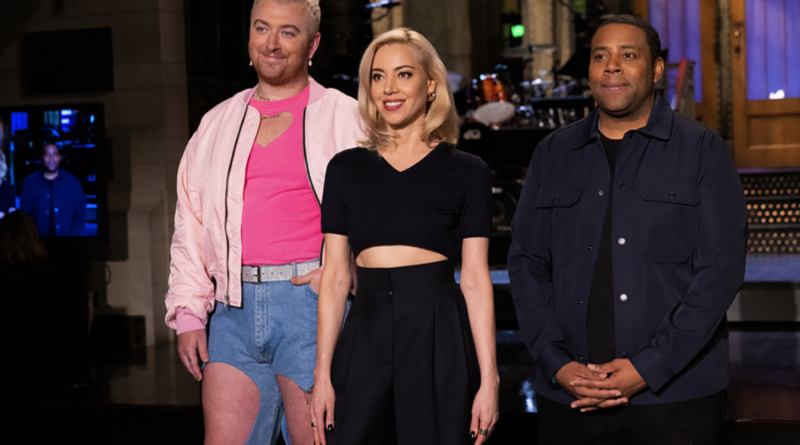 Plaza will be making her hosting debut this weekend, while Smith will take the stage as musical guest for the third time.

Saturday Night Live has a jam-packed lineup this weekend, with Aubrey Plaza making her hosting debut and Sam Smith taking the stage as musical guest.

To gear up for the big night, the superstar duo joined SNL favorite Kenan Thompson for a new promo clip. “We love you in The White Lotus,” Thompson tells Plaza, before Smith chimes in, “Emily the Criminal is brilliant.”

However, Thompson then mixes up Plaza for Jenna Ortega when he says, “You were great in Wednesday.”

When the actress reveals that she wasn’t in the popular Netflix series, Thompson asks her to “at least” do the viral Wednesday-inspired dance trend. “No,” Plaza simply replies, with her characteristic deadpan tone.

Smith posted the video to Instagram, along with the caption, “Saturday [yellow heart emoji].” They will be serving as musical guest on the iconic sketch comedy show for the third time, just a week before their highly anticipated new album Gloria drops on January 27. The LP comes on the heels of the singer’s Hot 100 chart topping collaboration with Kim Petras, “Unholy.”

Saturday Night Live airs every Saturday live on NBC at 11:30 p.m. ET/8:30 p.m. PT. For those without cable, the broadcast will also stream on NBC’s streaming service, Peacock, which you can sign up for at the link here. Having a Peacock account also gives fans on demand access to previous SNL episodes as well.

Watch the promo below.