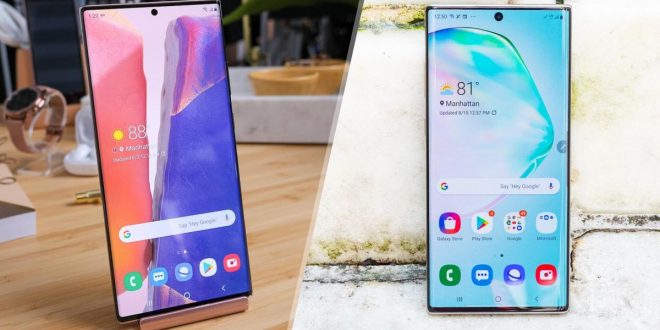 The Galaxy Note series has always followed a “Go big or go home” philosophy, and that’s very much on display with the Samsung Galaxy Note 20 Ultra. The new phone has one of the largest screens you’ll ever find on any phone — at least on one that doesn’t fold open — along with the most powerful processor available to an Android device. You’ll also get multiple cameras and an upgraded S Pen with less latency than ever before.

In fact, the Note 20 Ultra introduces so many changes, you might wonder if it’s a completely different device from the Galaxy Note 10 Plus that used to be Samsung’s best big phone. While the new model still has a lot in common with last year’s super-sized phone, a lot has changed since the Note 10 Plus made its debut a year ago.

Flip over the phones, and you’ll see a big design difference. The Note 10 Plus camera array is pretty minimal, with its lenses descending down the left side of the phone. For the Note 20 Ultra, Samsung went with a more prominent square array that’s hard to look away from. It’s the one area where the Note 20 Ultra might be a step back from its predecessor.

You’ll also have less dynamic color options with the new phone, as the Aura Glow option on the Note 10 Plus was a real eye-catcher. The Note 20 Ultra’s Mystic Bronze, Mystic Black and Mystic White options are not nearly as mystical as their names might have you believe.

The AMOLED panel on the Galaxy Note 20 Ultra is slightly larger than the one on the Note 10 Plus, with a 6.9-inch screen replacing the 6.8-inch display on last year’s phone. But that’s not the real story here.

Instead, the most noteworthy thing about the Galaxy Note 20 Ultra is its use of a dynamic 120Hz refresh rate. That means the Note 20 Ultra can adjust how quickly it refreshes depending on what you’re using the phone to do. If you’re scrolling or playing a compatible game, the Note 20 Ultra will max out the refresh rate; when you’re engaged in more static activities, that refresh rate will scale all the way down to 10Hz if you’re looking at still images.

The Note 10 Plus just doesn’t compare to that feature, as it’s got a 60Hz refresh rate — typical of most smartphones, really. That said, HDR10+ support and Quad HD+ resolution means that the Note 10 Plus’ display is still sharp and colorful, even if it’s not as immersive as what the Galaxy Note 20 Ultra offers.

Samsung shuffled up the cameras it used on its different Galaxy Notes, scrapping a time-of-flight sensor on this year’s model but opting for more megapixels and a more powerful zoom. The results should be sharper photos with the Galaxy Note 20 Ultra, particularly when you’re zooming in on a subject, though we’ll have to pit the phones against each other in a photo face-off to be sure.

Specifically, the Galaxy Note 20 Ultra adopts the 108-megapixel main camera that Samsung first introduced with the Galaxy S20 Ultra. To help alleviate some of the focus issues users experienced with that earlier phone, Samsung added a laser autofocus sensor, which replaces the time-of-flight sensor found on last year’s Note 10 Plus. The main camera on that older Galaxy Note topped out at 12MP.

Up front, there’s no change in selfie cams with both Galaxy Note models turning to 10MP shooters with apertures of f/2.2.

The Note 10 Plus actually comes with more on-board storage in its base model — 256GB to the Note 20 Ultra’s 128GB — with both phones also offering a 512GB option and microSD card slots to expand storage even further. Samsung packed both phones with 12GB of RAM.

By default, the Galaxy Note 20 Ultra comes with 5G connectivity, thanks to Qualcomm’s X55 modem, which is capable of working on all types of 5G networks. To get 5G with a Note 10 phone, you would have had to buy the $1,299 Note 10 Plus 5G.

A bigger screen requires a bigger battery, and that’s what Samsung has gone with for the Galaxy Note 20 Ultra. The new phone features a 4,500 mAh power pack, a bump up from the 4,300 mAh battery inside the Note 10 Plus. That battery helped last year’s Samsung phone hold out for 10 hours and 47 minutes on our battery test, which involves continuous web surfing over LTE until a phone runs out of power. That result is better than the average smartphone, though the Note 10 Plus fell short of landing on our list of the best phone battery life, where you need to go at least 11 hours before you need a charge.

Can the Note 20 Ultra outperform its predecessor? The bigger battery will help, but we’re interested to see if the faster refresh rate on the new phone’s screen impacts battery life. It certainly did when we tested the Galaxy S20 Ultra with the 120Hz refresh rate enabled, as results three hours worse when we left the screen with a 60Hz refresh rate.

Galaxy Note 20 Ultra vs. Galaxy Note 10 Plus S Pen and other features

The Note 20 Ultra ships with Android 10 and Samsung’s One UI 2.0 interface. The Note 10 Plus has upgraded to Android 10 after initially shipping with Android 9. We wouldn’t expect an Android 11 update to be available for either phone until the end of 2020.

You’d expect a phone that’s a year older to be at least a year better than its predecessor. And while we’re still in the process of evaluating the Galaxy Note 20 Ultra, it looks like Samsung’s new phone has easily surpassed the Note 10 Plus.

The cameras on the Note 20 Ultra are more powerful, and the souped-up processor is all but certain to handle demanding apps and games more efficiently. We appreciate the fact that DeX no longer requires any sort of cable or dock with Samsung’ new phone, and the better performance of the S Pen is a bonus as well. But the real difference-maker is the faster refreshing display on the Galaxy Note 20 Ultra, which makes for a much more enjoyable experience.

The Galaxy Note 10 Plus is still a powerful phone, and unless you plan on taking advantage of a generous trade-in offer to mitigate the cost of upgrading, it would be hard to justify spending $1,299 on a new phone when your old Note still performs well. Still, if you want 5G connectivity, better overall performance and — most significantly — that more immersive display, the Galaxy Note 20 Ultra is the Samsung phablet to get.