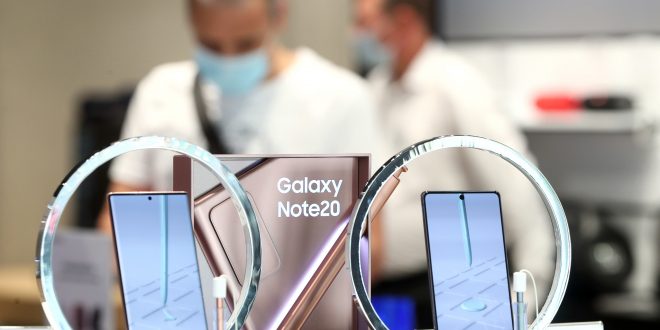 Samsung shares could rally over 40% to record highs on smartphone rebound and chips, analyst says

Smartphones for sale at one of the Samsung retail stores in Russia.

GUANGZHOU, China — Samsung shares could rally over 40% in the next year, according to one analyst who sees TV and smartphone sales rebounding sharply in the near-term and a boost in the chip division.

SK Kim, analyst at Daiwa Capital Markets, raised his 12-month price target on the stock to 85,000 Korean won ($71.52) from 82,000 Korean won. That represents upside of around 45% from Wednesday’s close, when Kim issued his target price revision.

“We expect strong earnings upside to Samsung Electronics’ (SEC) earnings in 3Q20, led by the set device (mobile and TV) division,” Kim said in a note. “In addition, we see multiple catalysts for SEC in 2021 on opportunities from 5G, memory and foundry, which should drive a rebound in its share price, in our view.”

Samsung shares hit an all-time intraday high of 62,800 Korean won ($52.84) in mid-January on hopes of a strong 2020. But after the coronavirus pandemic spread globally, shares fell as low as 42,300 Korean won ($35.59) in March, amid the broader global market sell-off. Since then, the stock has recovered, but is still below January’s record high.

Part of the pressure on shares has also come from weakness in the prices of DRAM, a type of memory semiconductor that is a key driver of Samsung’s business.

But overall, analysts are bullish on Samsung’s outlook over the next year and expect the stock to hit new record highs.

For Daiwa Capital Markets’ Kim, a rebound in smartphone and television sales could be a short-term catalysts for Samsung’s stock to move higher.

“While we assume SEC to maintain cost savings amid COVID-19, we expect a sharp rebound in sales of smartphones and TVs to drive robust earnings upside in 3Q20,” Kim said.

Samsung could sell 79 million smartphones, up 46% quarter-on-quarter, according to Kim.

Kim said he forecasts that profit for the two business units that house smartphones and TVs will outgrow the component division, which includes semiconductors and displays, for the first time since the second quarter of 2016.

Sanjeev Rana, analyst at CLSA, also increased his forecast for smartphone shipments to 80 million units, up from 69 million previously, in a note published earlier this week.

“It seems Samsung is benefitting from Huawei’s woes in Europe and Latam and anti-China sentiment in India,” Rana told CNBC by email.

Indeed, while Huawei managed to become the number one smartphone maker in the second quarter and overtake Samsung for the first time, it did so by gaining a huge market share in China. Meanwhile, its performance in international markets took a hit. Huawei is feeling the effects of U.S. sanctions which have cut off its access to Google Android on its most recent flagship handsets.

Huawei said on Thursday that it would bring its own operating system, HarmonyOS, to its smartphones next year.

Samsung released two high-end smartphones in the last few weeks. In August, it launched the Galaxy Note 20 and a $1,999 folding phone called the Galaxy Z Fold 2 this month.

5G and chips ahead

Huawei’s issues are also benefitting Samsung in other areas too. The company, which is a smaller player in mobile networking equipment versus Huawei, Ericsson and Nokia, recently won a major $6.64 billion contract with Verizon to provide wireless communication solutions.

The U.S. has effectively blocked Huawei from the market while other countries including Australia and the U.K. have barred the Chinese firm from being part of their next-generation 5G mobile network rollouts.

Kim said the Verizon deal could result in operating profit of 1.2 trillion Korean won ($1.01 billion) by 2025.

Meanwhile, Samsung’s semiconductor division, which accounts for about two-thirds of operating profit, should continue to grow in the near-term and in 2021.

In the third quarter, Rana in his note said that there has been a rush of orders from Huawei and other smartphones makers looking to “benefit from Huawei’s woes” for memory chips. That has led to so-called DRAM inventory to remain “stable,” giving Samsung an “edge in contract ASP (average selling price) negotiations” with device manufacturers. A stable supply is better than too much supply as it allows Samsung to have higher bargaining power on prices.

Kim said that trends including upgraded processing units in servers and the release of new gaming consoles will also help Samsung’s gaming division. Both Sony and Microsoft are releasing flagship consoles this year.

Samsung is also one of the leading chip foundries. That means it manufactures semiconductors for other firms. Earlier this month, Nvidia launched a new range of GeForce RTX 30 Series of graphics processing units (GPUs) and chose Samsung to manufacture them.

Analysts are expecting more major deals in other non-memory areas.

CLSA’s Rana forecasts non-memory revenue to increase to 30 trillion Korean won ($25.24 billion) by 2022 versus 18 trillion this year with operating profit nearly doubling over this period to 3.8 trillion won ($3.2 billion).