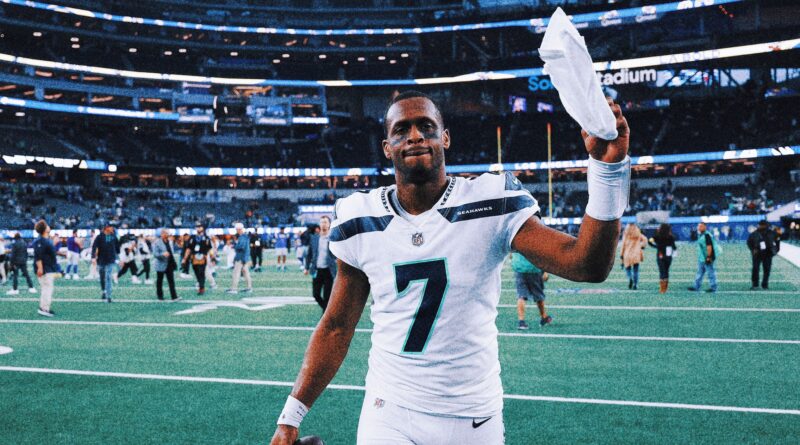 Geno Smith has taken a long, winding road toward leading the Seattle Seahawks to a 7-5 record and potential playoff berth in 2022.

After starring at West Virginia in college, Smith had a rocky first two NFL seasons with the New York Jets before losing his starting job in 2015 thanks in part to a broken jaw suffered when teammate IK Enemkpali punched him in a preseason locker room altercation. Smith then spent the next seven seasons as a backup with the Jets, New York Giants, Los Angeles Chargers and Seahawks.

Entering the NFL as a starting quarterback and quickly becoming a backup could damage many players’ confidence, but Smith kept things in perspective when asked about that period of his career.

Smith beat out Drew Lock for the Seahawks’ starting quarterback role prior to the 2022 season following Seattle’s blockbuster trade of former franchise quarterback Russell Wilson to Denver for a package of players and draft picks — including former Broncos starter Lock.

Since then, Smith has become a revelation for the Seahawks. The 32-year-old has a league-best 72.7% completion percentage, 3,169 passing years and 22 touchdowns — all easily career highs already.

He has only thrown six interceptions, nearly a decade removed after throwing 34 over his first two seasons in the league.

Smith has been on the opposite trajectory as his former teammate Wilson ever since Smith and the Seahawks beat Wilson and the Broncos on Monday Night Football in Week 1. The Broncos have sunk to 3-9 and last place in the AFC West, while Wilson has endured criticism for both his on-field play and pregame habits.

Smith, meanwhile, was named “Biggest Breakout” in a midseason poll of FOX Sports NFL reporters and was named the midseason Comeback Player of the Year by both Colin Cowherd and the NFL on FOX social media fan vote.

Russell Wilson, Broncos are 3-9, ‘Nobody thought it’d be this bad’

Colin Cowherd talks Russell Wilson, whose Denver Broncos are now 3-9 after a loss to the Baltimore Ravens.