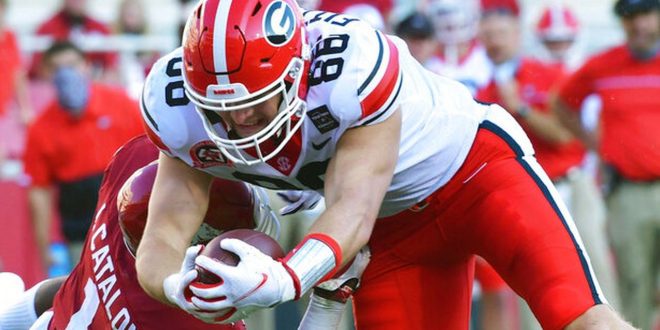 SEC Football by the Numbers: Top 10 from Week 1

3 Players who started LSU’s 42-25 victory over Clemson in the CFP national championship game on Jan. 13 started the Tigers’ 44-34 season-opening loss to Mississippi State on Saturday. Right offensive tackle Austin Deculus, wide receiver Terrace Marshall Jr. and JaCoby Stephens, listed as a safety against Clemson and a linebacker against MSU, started both games. LSU became the first team to lose its first game in the season after earning the national championship since 1998, when Michigan kicked off with a 36-20 loss to Notre Dame after earning the last AP title in 1997 before the start of the BCS playoff. LSU became the first defending national champion to open the season with a home loss since 1978, when Notre Dame followed its 1977 title season with a 3-0 loss to Missouri.

FOR MORE OF AL.COM’S COVERAGE OF THE SEC, GO TO OUR SEC PAGE

8 Receptions for 170 yards and four TDs for Florida TE Kyle Pitts in the Gators’ 51-35 victory over Ole Miss on Saturday. Pitts became the fifth SEC player and 41st NCAA FBS player with at least an 8-170-4 receiving line since the 2020 season, and the first tight end to do so. Pitts tied the Florida record for TD receptions in a game set by Jack Jackson against New Mexico State in 1994 and equaled by Ike Hilliard against Tennessee in 1995. He also tied the SEC record for TD receptions in a game by a TE, also accomplished by Vanderbilt’s Allama Matthews against Virginia Tech in 1982 and Kentucky’s James Whalen against Georgia in 1999 (and Kentucky’s Al Bruno against North Dakota in 1950 and Georgia Tech’s Buck Martin against Auburn in 1951, if those two players are considered tight ends and not simply ends). Pitts’ shattered the Florida record for receiving yards by a tight end in a game of 122 by Kirk Kirkpatrick against Akron in 1990.

16 SEC games between 100-yard receivers in conference competition for Arkansas. In the Razorbacks’ 37-10 loss to Georgia on Saturday, Arkansas WR Treylon Burks caught seven passes for 102 yards, including a 49-yard TD. He became the first Arkansas player with 100 receiving yards in a league game since Jordan Jones caught two passes for 122 yards (a 57-yard TD reception and a 65-yard catch) in the Razorbacks’ 48-45 loss to Missouri on Nov. 24, 2017. Two Arkansas receivers reached 100 yards in non-conference games between Jordan and Burks.

18 Years since Alabama started a season with an incomplete pass on its first play. In the Crimson Tide’s season-opening game against Missouri on Saturday, QB Mac Jones couldn’t connect with WR Jaylen Waddle on Alabama’s first snap of the season. In the Tide’s 2002 season-opener against Middle Tennessee, QB Tyler Watts failed to complete his throw to WR Triandos Luke on the Tide’s first snap. In the 17 season-opening games between Alabama’s 39-34 victory over Middle Tennessee in 2002 and 38-19 victory over Missouri on Saturday, the Tide passed on its first snap three times. Brodie Croyle and Matt Caddell hooked up for a 19-yard gain to start a 26-7 victory over Middle Tennessee in 2005, Greg McElroy threw a 5-yard pass to Julio Jones to start a 48-3 victory over San Jose State in 2010 and Blake Sims completed a 24-yard pass to Amari Cooper to start a 33-23 victory over West Virginia in 2014. On Saturday, Jones completed eight passes for 134 yards and two touchdowns to Waddle, with all but a 13-yard completion coming in the first half.

79 More passing yards for Mississippi State QB K.J. Costello in a 44-34 victory over LSU on Saturday than any other SEC player has had in a game. Costello completed 36-of-60 passes for 623 yards with five TDs and two interceptions against LSU. Costello posted the 11th-most passing yards in a game in major-college football history. The SEC record for single-game passing yards had been 544 by Georgia QB Eric Zeier in a 54-24 victory over Southern Miss in 1993. The SEC record for passing yards in a conference game had been 528, set by Kentucky QB Jared Lorenzen in a 34-30 loss to Georgia in 2000 and matched by LSU QB Rohan Davey in a 35-21 victory over Alabama in 2001. The Mississippi State record for single-game passing yards had been 508 yards by Dak Prescott in a 51-50 victory over Arkansas in 2015. Costello’s big day enabled WRs Osirus Mitchell and JaVonta Payton and RB Kylin Hill to become the second threesome in MSU history to record 100 receiving yards in the same game. The other game in which the Bulldogs had three 100-yard receivers came in MSU’s 49-34 loss to Georgia Tech in the Orange Bowl on Dec. 31, 2014, when Joe Morrow, Fred Ross and De’Runnya Wilson did it.

119,860 Was the announced attendance at the seven SEC games on Saturday, each played with crowd limitations because of the coronavirus pandemic. The attendance figures ranged from 24,073 at Kyle Field for the Vanderbilt-Texas A&M game to 11,738 at Memorial Stadium for the Alabama-Missouri game.

Note to readers: if you purchase something through one of our affiliate links we may earn a commission.