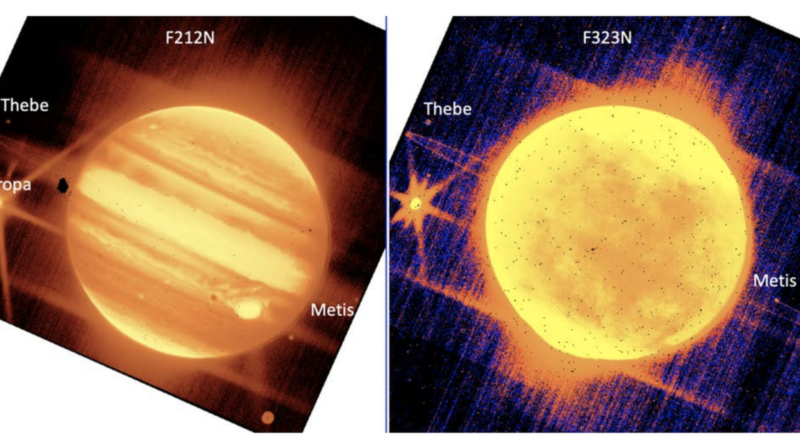 The Webb telescope team has released new images of the planet Jupiter and some of its moons, a portent of what’s to come for the nascent, $10 billion space observatory.

Webb’s first images were unveiled earlier this week; they depicted a quintet of swirling galaxies, two nebulae, and a deep field previously imaged by the Hubble telescope in breathtakingly new detail. All those objects were thousands to billions of light-years away, while Jupiter is just 430 million miles from Earth, making the gas giant the nearest object Webb has yet imaged.

“Combined with the deep field images released the other day, these images of Jupiter demonstrate the full grasp of what Webb can observe, from the faintest, most distant observable galaxies to planets in our own cosmic backyard that you can see with the naked eye from your actual backyard,” said Bryan Holler, a scientist at the Space Telescope Science Institute, in a NASA release.

The two colorful shots of Jupiter above were captured during the Webb telescope’s commissioning and were included in a Space Telescope Science Institute report. The images, taken by Webb’s NIRCam instrument, were produced by a 75-second exposure . Jupiter’s moons Metis, Thebe, and Europa are also visible. Just to the left of Jupiter’s Great Red Spot—a century-old storm system roughly twice the size of Earth—the shadow of Europa can be seen cast on the planet’s surface.

The mages weren’t translated into full-color. Webb exclusively takes in infrared and near-infrared light, wavelengths our eyes are incapable of seeing. Later this year, Webb will take much better images of Jupiter and the Jovian system. Webb’s observation docket has been filled for the coming year, and Jupiter’s one of the first solar system objects that will be studied in detail as part of the telescope’s Early Release Science program.

According to the program’s website, Webb will be used to characterize atmospheric phenomena of Jupiter, like its cloud layers, aurorae, temperature, and winds. The cutting-edge space telescope will also map the surfaces and atmospheres of the volcanically active Io and Ganymede, the largest moon in the solar system.

Jupiter also has a ring (albeit one much harder to see than Saturn’s iconic disc) that Webb already has imaged but will study in greater detail later. So what you’ve seen so far of Jupiter is preliminary.

Today, Webb is looking at a number of galaxies and star clusters, according to the telescope’s observation schedule. But we’ll soon see some solar system objects on its docket.