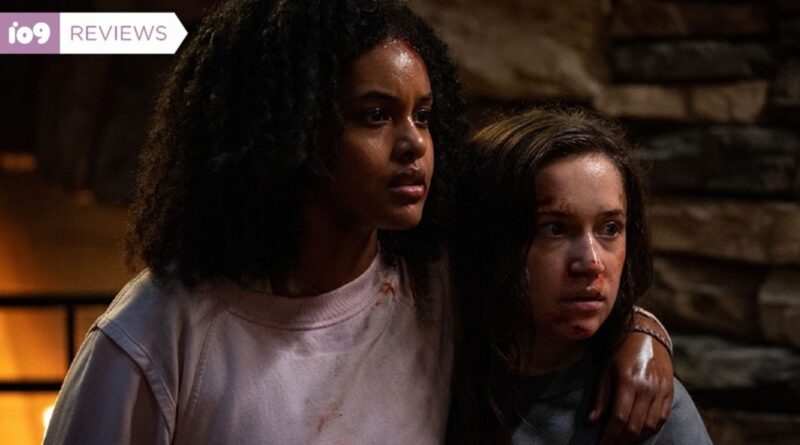 With properties like Scream, Dawson’s Creek, and The Vampire Diaries, writer Kevin Williamson has always been able to tap into a collective understanding. But a passion for movies or teen angst has nothing on the fear of covid-19, and that’s what Williamson deals with in Sick, a new film from director John Hyams, co-written by Williamson and Katelyn Crabb.

Sick stars Gideon Adlon and Bethlehem Million as Parker and Miri, two college girls who decide to quarantine together at a beautiful remote lakeside cabin in April 2020. The timing is significant because the uncertainty and fear the world had at the beginning of the pandemic is a crucial component of the film. Everyone watching Sick will remember and relate to those first few months where no one really knew what to do. Mask up, stay six feet apart, but that’s about it. So when Parker starts getting mysterious texts messages, it’s movie fear on top of real fear.

The film draws humor from some of those early misconceptions, like whether or not you should clean your groceries with disinfectant wipes or the scarcity of toilet paper. Which, for some, might be too soon as the pandemic is certainly not over as of the making of this film. But eventually it gets past that and those text messages become a real life menace, which is where Sick takes our collective experience of covid-19 and channels it into something even more visceral: the fear of being killed by a person who stalks you and sneaks into your house.

At under 90 minutes, Sick wastes no time putting Parker and Miri in wildly tense situations. Hyams isn’t shy about showing the bad guys in the frame, just out of sight of the girls, building anticipation with each and every shot. And once things reach a boiling point, what was mostly a slasher thriller turns into a chase movie, which adds even more possibilities for innovative scares.

Sick doesn’t reinvent the horror genre like Williamson once did with Scream, but it uses some of the best parts of that movie—like the way the killer could toy with the victims and audience—and relocates them to a place and time we can all relate to. Plus, there are a few reveals that give the movie some actual resonance along with the scares and tension. It’s fun and very well done… if you are ready to treat covid-19 with some humor, which maybe not everyone is.

Sick just played Fantastic Fest 2022 but does not yet have distribution.