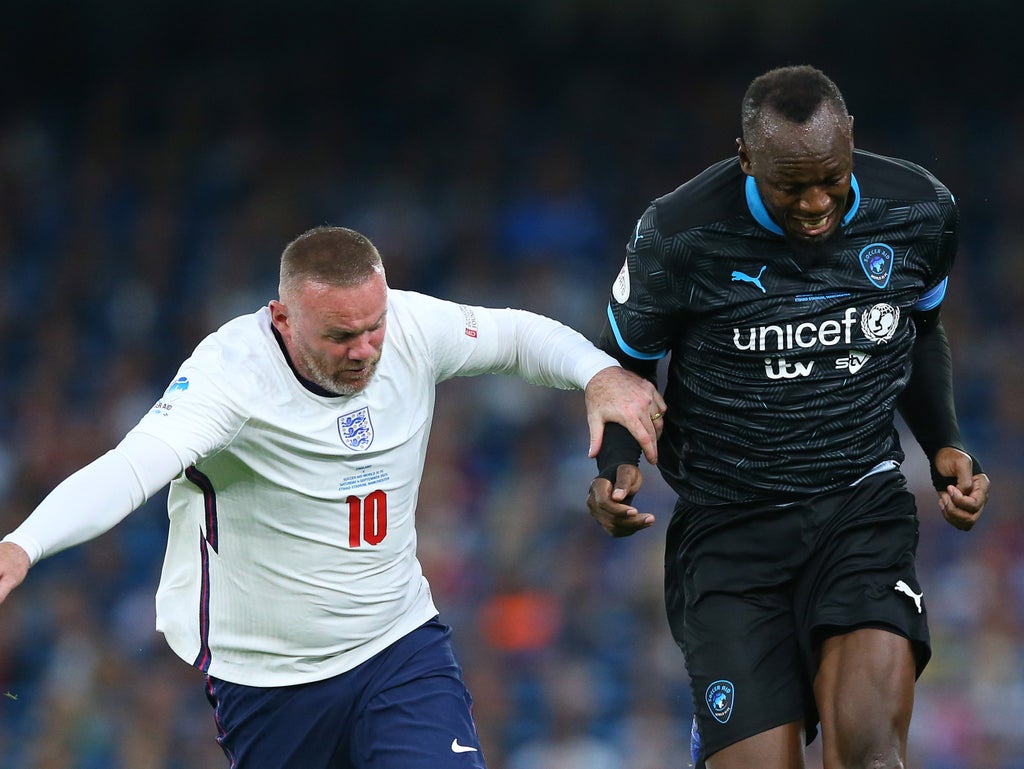 The Rest of the World XI beat England 3-0 in the Soccer Aid for UNICEF 2021 charity match at Manchester City’s Etihad Stadium.

Both teams – which included a mix of celebrities and other famous names such as Olympic champion sprinter Usain Bolt – took the knee before kick-off, applauded by the Etihad Stadium crowd.

In the 10th minute, World XI captain Bolt was pulled back by former Manchester United defender Gary Neville on the edge of the box, conceding a free-kick which Dutchman Clarence Seedorf rattled against the crossbar.

England threatened with long-range efforts from freestyler Harriet Pavlou before reality television star Mark Wright, who had a spell with Crawley last season, fired over.

Bolt shot into the side netting after being played in one-on-one against England goalkeeper David James, while at the other end singer-songwriter James Bay was also off target after being picked out by Shaun Wright-Phillips.

The second half saw celebrities go in goal, with presenter Ore Oduba sent on for the World XI while Joel Dommett, host of The Masked Singer TV show, stood in for England, with Paddy McGuinness out injured and Roman Kemp unavailable after a positive Covid test

Presenter Stephen Mulhern was then introduced as England’s ‘Masked Winger’, but – still in his bulky costume – was soon shown a yellow card for clattering into Darren Fletcher.

Dutchman Nigel de Jong saw his cross drop through the box and onto the far post before World XI took the lead in the 51st minute as Love Island’s Kem Cetinay sent a slow effort goalwards from 20 yards – which rolled past Dommett’s miss kick and on into the net.

Mulhern was physically carried off as Sir Mo Farah came on, with 2020 Olympic champion Max Whitlock also another substitute. Farah, though, appeared to soon pull a muscle and limped off.

Oduba saved from Rooney and fellow former England international Joe Cole before Cetinay added a second goal with a low finish into the corner after being played onside by Bay with 15 minutes left.

Following the match, it was announced the event had raised a record £13,014,769, the most in the 10-year history of Soccer Aid.

Lee Mack wraps up a convincing 3-0 win for the World XI after Kem’s double.

England were very disappointing overall, but the main thing is the money raised from tonight’s game.

See you next year!

Lee Mack is through on goal twice – and fired wide twice.

Thankfully, the Not Going Out star finally catches a break minutes later to convert Fletcher’s cross.

After three years of penalty pain, redemption at last.

Clean through on goal, the United legend leans back and blazes his shot over the bar.

It’s not been Wayne Rooney’s – or England’s – day so far.

Not long now for England to try and grab a goal here.

If anything it’s the Three Lions who look to be tiring, especially in defence.

A third goal for the WXI would surely wrap this up.

The former Love Island contestant is the difference between the two sides so far – and he’s still on for the hat-trick.

Carragher is lucky to avoid a card after bringing Kem down clean through on goal.

Kem does it again!

It’s a sublime finish this time, right into the bottom corner of the net.

Dommett couldn’t do much about that one.

Jamie Redknapp and Joe Cole are now on for England. Kelly Smith has also come on to replace her former England teammate, Faye Williams.

The Three Lions are starting to work their way back into the game.

Only 10 minutes after coming on Farah is forced off the pitch again with what looks like an injury.

Aitch is now back on to replace the three-time Olympic champion.

Olympians Max Whitlock and Mo Farah are now on for England.

Kem has another strike at goal but thankfully for Dommett it whizzes just wide. World XI midfielder Chelsea Grimes is the standout player of the second half so far.

The opening goal of the game – and it doesn’t get any better the more you watch it.