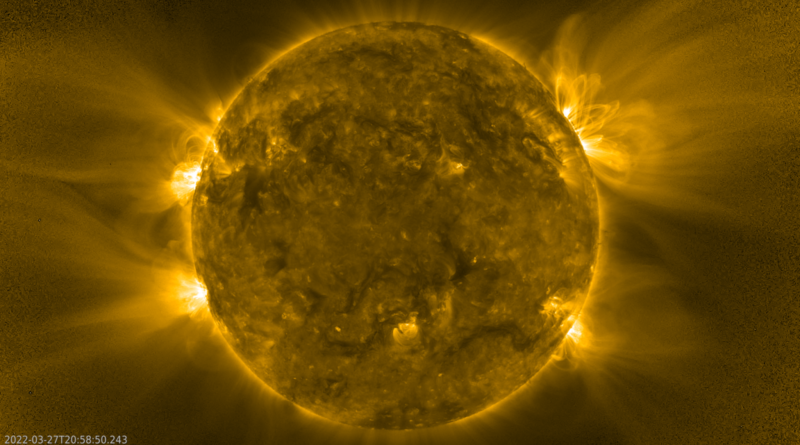 We’re drooling over the latest image dump from the Solar Orbiter mission. These incredible pictures and videos, captured during its close approach in March, highlight the awesome power of this probe to show us our host star in a whole new light.

Solar Orbiter made a close approach to the Sun—known as a perihelion—on March 26. The spacecraft, launched in February 2020, is a joint project between the ESA and NASA. It’s investigating the Sun using a suite of 10 instruments, including the Extreme Ultraviolet Imager, which took most of the images seen here. The orbiter’s mission is to help us understand the heliosphere by studying phenomena like the solar wind and the Sun’s magnetic field.

When two points on the Sun’s surface with a similar magnetic field connect, the Sun can release a huge burst of radiation into space. This is called a solar flare, and Solar Orbiter caught this view on March 2 using the Extreme Ultraviolet Imager, which allows Orbiter to record plasma at incredibly high temperatures, and the X-ray Spectrometer/Telescope, which measures the high-energy X-rays the Sun emits during a solar flare.

These two images are of the same spot on the Sun and were taken on March 17 using the Extreme Ultraviolet Imager and the Polarimetric and Helioseismic Imager, which is made up of two telescopes that survey the Sun’s magnetic field. The Extreme Ultraviolet Imager took the yellow image (color was added afterwards), which shows the loops of magnetism reaching into the stellar atmosphere, capturing hot gas along the way. The black-and-white image comes from the Polarimetric and Helioseismic Imager, where the two colors represent different zones of polarity.

On March 21, Solar Orbiter’s Energetic Particle Detector noticed a shower of energy that washed over the probe as it approached the Sun. This GIF starts as the Extreme Ultraviolet Imager recorded ultraviolet light being emitted in the Sun’s atmosphere, with a more pronounced disturbance appearing 10 minutes later. After another 10 minutes, the X-ray Spectrometer/Telescope began to detect X-rays being emitted, which are shown in red, and shortly after the instrument saw higher energy X-rays, which are shown in blue. The Sun kept emitting these X-rays for another 20 minutes.

The Reach of a Solar Flare

The Reach of a Solar Flare

Images and data from March 25 show us just how far a solar flare extends. The yellow images of the Sun were taken by the Extreme Ultraviolet Imager, showing a solar flare on the lower left side of the star. Zooming out shows data taken by Metis, which is a coronagraph, or an instrument that can image the Sun’s outer atmosphere. You can see how the solar flare excites a region of the atmosphere in the bottom left of the video. Zooming out even more, data from the Solar Orbiter Heliospheric Imager shows the mammoth scale of the coronal mass ejection as it shoots into space.

This time-lapse shows Solar Orbiter approaching its perihelion, or the point at which it’s the closest to the Sun. The video begins with images taken on January 30 by the Extreme Ultraviolet Imager and ends with a view from April 4, a week after the perihelion. This makes the Sun in the video grow and briefly shrink as the satellite approaches and then retreats. The ESA says that Solar Orbiter was feeling the corona’s heat, estimated at 1 million degrees.

Solar Orbiter saw the Sun’s South Pole on March 30. ESA says that the poles of the Sun could be a scientifically mysterious area, but for now we know that the Sun’s magnetic fields—which create the star’s active regions—are swallowed up by the poles. There, they might become a part of future solar activity. Solar Orbiter will be able to get a better view of the Sun’s poles beginning in 2025, when it will use Venus’ gravitational pull to increase its inclination.

ESA scientists were excited to see what they have dubbed “the Solar Hedgehog.” The image was captured on March 30. According to the ESA, the Solar Hedgehog is a 25,000-kilometer (15,500-mile) expanse of plasma with different areas that are hotter and cooler, and the task now is to study this region more thoroughly.