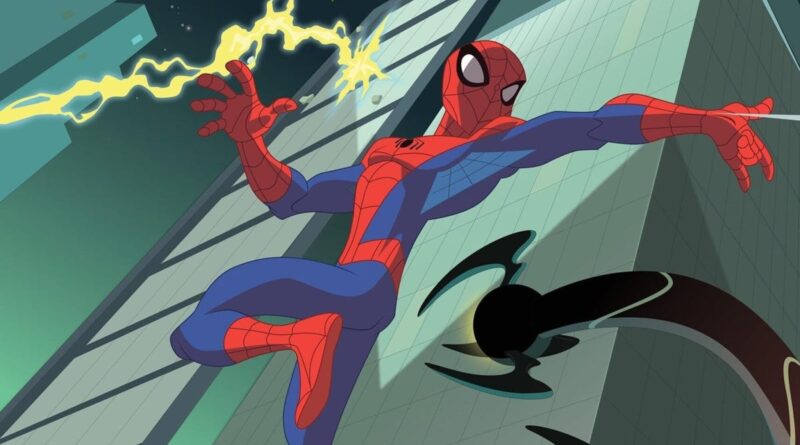 Spider-Man is, at this point, just a constant force of nature who will outlive us all and possibly the heat death of the universe. While he’s plenty popular across films, comics, and video games, it’s animation—and more specifically, TV animation—where some of his most enduring work lies. Of the many shows to bear his name, it’s Spectacular Spider-Man that is one of, if not the absolute best. And it’s recently made its way over to Netflix, so it’s as good a time as any to discuss why it’s so good.

Spectacular first aired on KidsWB! back in 2008 before jumping ship to DisneyXD in 2009 for its second season. Rather than focus on one particular aspect of the character as a source for inspiration, Spectacular was a blend of all aspects of the character’s comic and film history up to that point, from the early days when he had webs under his arms to the Ultimate Marvel version of the character where he and Eddie Brock (Ben Diskin) were childhood friends before Eddie eventually came to hate Peter enough to become Venom. As with other Spidey media, the Peter Parker of this universe (as voiced by Josh Keaton) is a high schooler who’s got some experience as Spider-Man, but still getting into the swing of things. All those average crimes he foiled over the summer break soon make way for super criminals looking to take him down, and near all of them in some way connected to either Norman Osborn (Alan Rachins) or the “Big Man,” aka Tombstone (Keith David, later Kevin Michael Richardson).

What’s made Spectacular stand the test of time over its two-season stint lies in how much it trusts itself. Instead of frontloading itself with backstory or plot developments, it’s got leisurely pacing and gives itself plenty time to breathe as Peter juggles being a rising superhero with his more mundane life as a high schooler with his friends Harry (James Arnold Taylor) and Gwen Stacy (Lacey Chabert). Spider-Man stories are at their best when Peter’s dual lives are on some kind of collision course, and Spectacular manages to successfully create this tension without it ever feeling rote or predictable. And it doesn’t hurt that the supporting cast—even Flash Thompson (Joshua LeBar), who outside of comics, just doesn’t get a chance to be a person—are all winners across the board.

As created by Victor Cook and Greg Weisman, who would eventually go on to make Young Justice with Brandon Vietti over at Warner Bros, you can see the bones of what that show’s storytelling would become in Spectacular. This is a pretty serialized, interconnected series, with multiple plot threads appearing throughout. Some episodes take place just a day or so after the one that came before it, and you can feel how core the idea of time is to the series. It’s nothing quite as hyperspecific as Justice’s timestamps, but Peter and company growing up and heading towards genuine milestones in their lives gives the show some extra “oomph” that otherwise would’ve been lacking had it existed in some nebulous point in time.

Compared to the Spider-Man shows that would follow after Spectacular, this Peter isn’t booked to be great or some sort of figurehead in the show’s version of the Marvel universe. He’s Just Some Kid, who simultaneously has nothing going for him beyond his intellect and photography skills while also brushing shoulders with enough people that he’s got a more than solid support system. Voice acting for Spider-Man across the character’s media history can be hit or miss, but Keaton really does stand up as one of the best. He makes his Peter just incredibly endearing from the start, and that the show’s more emotional beats work at all can be owed to him and the rest of the pretty strong voice cast. In the same way that The Batman’s got an underrated Joker thanks to Richardson, Spectacular has two hidden gems in the form of Steve Blum’s Green Goblin and Clancy Brown’s Rhino.

There’s a lot of other reasons to watch Spectacular Spider-Man, be it the still pretty catchy theme song or the way it manages to make each villain memorable by introducing them as people before they inevitably break bad. But the point is, the show’s fucking awesome, and you should go watch it, like right now.