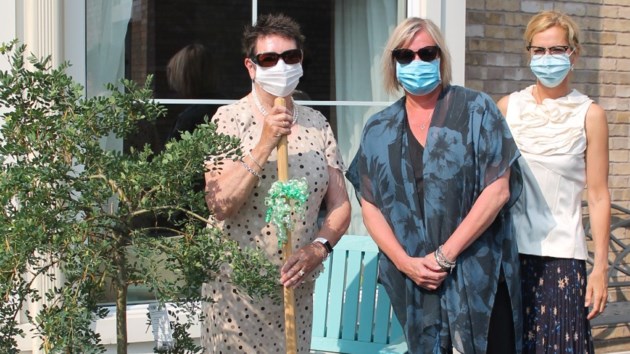 The Ashcroft family has donated more than $200,000 to St. Joseph’s Health Centre, not to mention giving countless volunteer hours to the facility

St. Joseph’s Health Centre is recognizing the decades-long support it has received from one Sudbury family.

This week, the health centre’s board of directors announced it was renaming the garden at St. Joseph’s Villa to honour the family of Jim and Margaret Ashcroft “for their many contributions to the organization over the past decades.”

“Today is a very special day for St. Joseph’s Villa,” Jo-Anne Palkovits, St. Joseph’s president and CEO/administrator. “It is a day to say thank you to Margaret and Jim Ashcroft and their family for their on-going collective generosity over the years to St. Joseph’s Health Centre of Sudbury and the previous Sudbury General Hospital, and to honour the memory and legacy of Jim Ashcroft.”

A small (and physically distanced) ceremony was held at St. Joseph’s Villa recently to rename the garden the “Jim Ashcroft Family Healing Garden”. On hand for the ceremony was Margaret Ashcroft, Jim Ashcroft’s wife, and their sons, Mark, Brendan and Andrew, along with their families.

St. Joseph’s said the renaming honour reflects the Ashcrofts’ years of support. Ashcroft was a St. Joseph’s Health Centre board member from 1987 to 1989, as well as being “an integral member of the Board’s Building and Property Committee.” He was also a member of the St. Joseph’s Foundation from 2000 to 2010.

That commitment extends to the couple’s son, Mark, as well. Mark Ashcroft is currently an active member of the Caring Beyond Capital Campaign team, which raises funds for St. Joseph’s Villa. Over the past several months, the health centre said he has secured over $500,000 in donations towards this campaign.

“Over the past several decades the Ashcroft family were not only dedicated volunteers, they were and continue to be true ambassadors and devotees who donated over $200,000 to the St. Joseph’s family,” the news release states.

Unveiled in 2016, the healing garden at St. Joseph’s features wheelchair accessible paths, raised planting beds, a gazebo, meadows and beautiful sitting areas for all to enjoy. The healing gardens will serve as an exterior area for rehabilitation and recreational use.