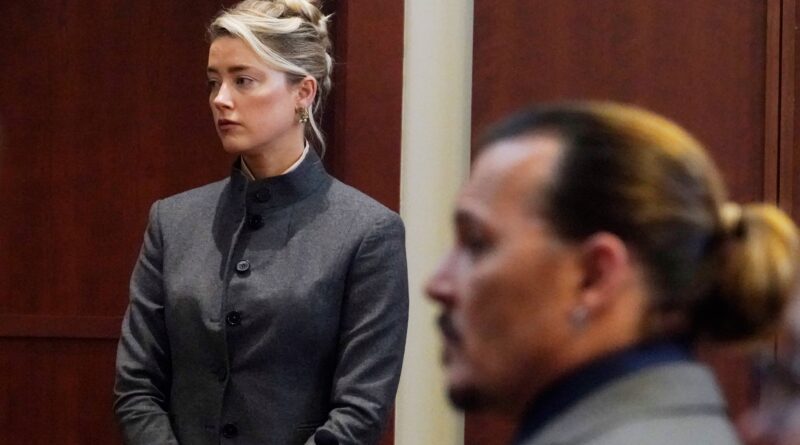 Look: I know the score. I’ve been in this hot-take game long
enough to identify with the relentless quest to snatch up a zeitgeisty news peg
in order to try to wedge it neatly into the broader cultural narratives du
jour—the better to feed the discourse monster and butter your bread for another
day. So it’s no real surprise to watch this happening in the ultra–high profile
Hollywood defamation trial currently playing out in a Fairfax County, Virginia, courtroom, where movie star Johnny Depp is suing ex-wife Amber Heard for $50
million. At issue is a
2018 op-ed in which Heard identified herself as a “public figure
representing domestic abuse,” evoking her allegations of repeated assault
during their relationship that Depp has flatly denied. Heard, in turn, has
countersued for $100 million over her former husband’s public condemnation of
her claims as “a hoax.”

Nearly everyone in the hot-take industry seems to agree the
case should be analyzed within the context of recent societal reckonings with
pervasive sexual and gender-based violence, anchored by the so-called #MeToo
movement. For left-of-center commentators, public reception of the case has
been painful proof of just how far we still have to go when it comes to
supporting victims: “Nearly five years after exposes on Harvey Weinstein’s
serial predation laid bare the ways powerful men leverage their influence to
cover up misconduct, Depp v. Heard feels like a jarring regression,” Claire
Lampen wrote in The Cut. In The Independent, Charlotte
Proudman wrote that “when I see hashtags like #AmberHeardIsALiar, I realize how
deeply entrenched misogyny is in our society … our patriarchal society is
sustaining this and using Depp to continue the empathy toward the perpetrators
and the admonishment of victims.”

It’s certainly true that many of Team Depp’s most stalwart
proponents are almost giddy in their confidence that the trial makes the
opposite point, exposing feminism’s rotten core: Johnny Depp has become a cause
célèbre
on men’s rights forums; The Daily Wire went
so far as to say Heard has triggered “the fall of MeToo.”

Here’s a third theory: They’re both wrong. The case neither
illustrates society’s enduring eagerness to denigrate a victimized woman in
defense of a powerful man nor illuminates the existence of pervasive
misandrist witch hunts. However tightly commentators may cling to their
motivated reasoning in order to reify their favored political narrative, the sensational
case is a mercifully unusual situation with little social applicability. The facts
in evidence simply don’t fit the ideological boxes into which they’re being
shoved. Good news, everyone: Depp v. Heard doesn’t actually have to mean
anything.

Let’s get something out of the way: In general, I am rather
sympathetic to one of these viewpoints and flat-out disdainful of the other. The
past several years have definitely brought a long-overdue audit of attitudes
and actions toward gender-based violence, resulting in many perfectly justified
takedowns of predators within various industries. We have also begun to grapple culturally with the ubiquity of sexual harassment and assault,
conceptions of consent and power, and the ways that flawed accountability
processes harm victims. These are all largely good things.

Given this context, it’s not surprising that people within
progressive feminist circles have seen Depp v. Heard as the latest
example of a powerful man getting a pass for terrorizing women from the
sycophants and industry bigwigs surrounding him, not to mention from his
adoring fans. In this telling, the vitriol targeting Depp’s much younger ex is
little more than old-hat misogyny targeting an “imperfect victim,” as so many
are.

But that position is undermined by the evidence in the case,
which strongly suggests that Heard has told numerous significant lies and
largely misrepresented her status as a victim of abuse, whether or not the
op-ed at the center of the trial meets the necessarily high standards to
constitute defamation. You don’t have to hate women or love the Pirates of
the Caribbean franchise to harbor deep misgivings about Heard’s
credibility.

The evidence on offer is difficult to discount. Multiple audio recordings—some recorded
as part of a therapy assignment; others surreptitiously by a second party—feature
Heard admitting to hitting Depp and refusing to promise to stop instigating
physical fights, calling him a “fucking baby” for attempting to defuse volatile
arguments by leaving the room over his pleas that “there can be no physical
violence,” trying to get him to stay in the room during a fight by saying
she’ll die if he leaves, admitting she hurls pots and pans when angry, and mockingly
saying that no one will believe him if he goes public as a victim of domestic
violence.

Multiple witnesses describe personally seeing Heard physically
assaulting Depp, including former
estate managers and several
former security
guards. Heard’s former assistant recounted the actress once spitting on her.
After one contested incident that resulted in part of Depp’s fingertip getting
sliced off, there’s an audio recording of the security team discussing which of
them should escort Heard by plane back home to Los Angeles—and whether it should be
someone better at mollifying her anger or someone strong in case she “kicks off.”
An independent medical examiner subsequently hired as an expert
witness for Depp’s side testified that Heard’s symptoms were not consistent
with PTSD but were consistent with exaggeration.

Meanwhile, Heard has described horrific and frequent
beatings and rapes at Depp’s hands: a pattern of violence that apparently left
her in fear for her life. Heard has contended that Depp’s abuse left extensive
injuries and allegedly occurred in the presence of multiple witnesses. She hasn’t
come close to persuasively corroborating these claims. Multiple people who had
contact with Heard in personal and professional capacities—including several medical
professionals—simply didn’t see evidence of the injuries Heard describes.

Photos and videos that she’s entered into evidence have
documented Depp’s problems with drugs and alcohol use and ashamed post-bender
apologies, concerning episodes of property destruction, and a toxic pattern of
mutual name-calling. Her photo evidence of injuries, however, are decontextualized
and simply not in league with her descriptions of them: One picture she has
said depicts her face with two black eyes, a broken nose, and a split lip
doesn’t obviously contain any of those things, save for a small mark near one
eye that could have any number of plausible causes. Her most significant
eyewitness is her own sister Whitney Henriquez, whose
former colleague and roommate swore under oath that Henriquez had apparently
moved out of Depp and Heard’s home because she was scared of her sister, and contemporaneously
confided that Henriquez
saw Heard attack Depp, not the other way around—an account corroborated
by Depp’s bodyguard on duty.

I realize that nitpicking a victim’s story to justify
disbelieving them indeed fills up several chapters of the patriarchal playbook,
and one could easily explain away one or even several of the holes in Heard’s
case as examples of an imperfect victim acting in self-defense or as
reflective of the internalized misogyny of whoever pointed them out. But the
extreme brutality of what Heard alleges—coupled with an utter lack of
independent corroboration of anything even approaching the extent of her story,
and the fact that several of Depp’s former partners have insisted he displayed no
abusive behavior before Heard met him, when he was in his fifties—makes her account very hard
to swallow. Resting the integrity of feminism on Amber Heard’s word is an
awfully shaky bet.

Fortunately for feminists, we don’t have to place these
wagers. It’s not difficult to accept that abuse is pervasive and underreported,
that the overwhelming majority of people who discuss their experiences with it
are telling the truth, that vanishingly few people would vindictively
exaggerate abuse or could possibly gain anything by doing so, and that there
are nonetheless exceptions to every rule. If Heard has indeed lied about what
she endured during her relationship with Depp in the context of an acrimonious
high-profile divorce with a multimillion-dollar fortune at stake and parlayed
those lies into an ACLU ambassadorship to build clout as a feminist crusader,
there’s no reason to indict women at large for this opportunistic transgression.
It’s utterly idiotic to imagine that this same set of stakes and incentives
exists for more than a handful of people on earth.

In the end, the Johnny Depp superfans captivated by the
trial—and who have been rightfully lambasted for creating a barrage of distasteful
TikToks expressing their sordid version of fandom—might end up with the facts
on their side. But here’s an important lesson to learn about this high-profile
trial that’s been served up for our amusement: Some things don’t get resolved
in a way that makes us feel good or lights a path to a deeper understanding. Depp
v. Heard isn’t some referendum on #MeToo, nor will it set back anyone’s
causes by re-unleashing some chilling threat to silence women for speaking out.
This trial is just a referendum on the reputation of two rich and famous actors
who treated each other jaw-droppingly terribly, in the most dramatic fashion
possible. Depp v. Heard is about Johnny Depp and Amber Heard, nothing
more.