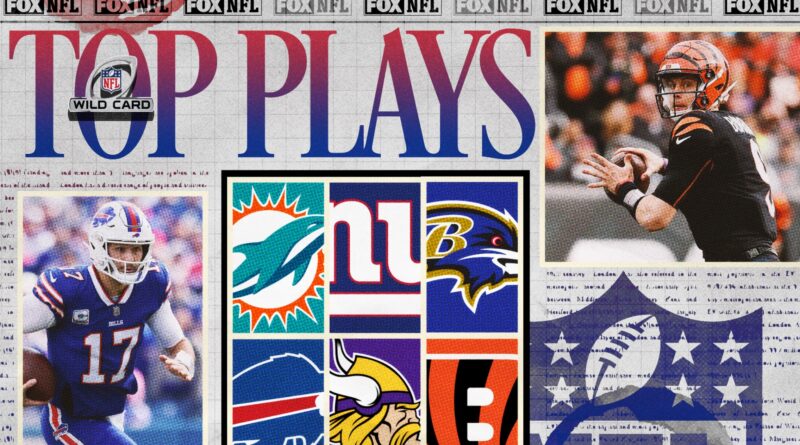 NFL Super Wild Card Weekend continued Sunday with three exciting games that each came down to the finish. The Cincinnati Bengals finished the day with a 24-17 win over the Baltimore Ravens to move onto the divisional round.

It wasn’t the Bengals’ stout offense though that won them the game. Rather, it was their defense that scored the game-winning touchdown. The Ravens were on the doorstep of taking the lead with the game tied 17-17 early in the fourth quarter, but when Tyler Huntley tried to extend the ball into the end zone on a QB sneak, Bengals linebacker Logan Wilson knocked the ball out of his hand and defensive end Sam Hubbard ended up with the ball before running 98 yards for a touchdown.

The Ravens had one last chance to score a touchdown that could’ve sent the game to overtime. With eight seconds left, Huntley threw a Hail Mary into the end zone that deflected off a Ravens receiver’s hand before falling incomplete as time expired.

Elsewhere, the sixth-seeded New York Giants upset the NFC North champion Minnesota Vikings, 31-24, to advance to the divisional round for the first time since the 2011 playoffs — when Big Blue went on to win it all at Super Bowl XLVI.

Here are the top plays from Sunday!

The B’s move the chains

Joe Burrow found Tyler Boyd for a big third-down conversion on the Bengals’ opening drive before they settled for three to take an early 3-0 lead.

Gaither-ing the ball for the turnover

Akeem Davis-Gaither got the ball back for the Bengals on the Ravens’ opening drive, intercepting Tyler Huntley on a pass over the middle to get the ball at midfield.

Burrow found Ja’Marr Chase over the middle for a 7-yard score as the star wide receiver ran the extra couple of yards into the end zone to give the Bengals a 9-0 lead.

J.K. Dobbins made the reception out of the backfield on third-and-goal and stretched out to break the plane for six. His second-quarter score made it 9-7 Bengals.

Kyle Hamilton not only made the third-down tackle well short of the sticks, but he also knocked the ball out of Hayden Hurst’s arm, giving the Ravens the ball back a play sooner with much better field position.

Huntley took the bad snap, which went over his head and a few yards behind him, and scrambled all the way to the sideline before unleashing a pass to Josh Oliver, who ran for the first down and an 18-yard gain.

After Hurst’s initial touchdown reception was ruled short, Burrow took care of business by running a QB sneak to give the Bengals the lead back.

Burrow went to Tee Higgins on the Bengals’ first 2-point attempts and while the pass fell incomplete, they got another chance because Higgins was interfered with. So, Burrow went back to Higgins again after the receiver slipped open during his scramble to give the Bengals a 17-10 lead with just over five minutes left in the third quarter.

The Ravens QB found Demarcus Robinson wide-open deep and hit him for the 41-yard score to tie the game up in the final minutes of the third quarter.

On the money to Mark

Mark Andrews hauled in the big third-down reception to help get the Ravens in Bengals territory as they look to take a fourth-quarter lead.

Hunting down the end zone

Huntley used his legs to get the Ravens 35 yards and move them to the Bengals’ 2-yard line.

The Ravens QB tried to reach the ball over the plane on the sneak, but Bengals LB Logan Wilson knocked the ball out of his hand and DE Sam Hubbard caught it. Hubbard ran 98 yards for the score to flip the script and give the Bengals a 24-17 lead in the fourth, receiving some help from his teammates on the return.

On fourth-and-20 with eight seconds left, Huntley had no choice but to throw the ball into the end zone as the Ravens were at the Bengals’ 27-yard line. His prayer was nearly answered as James Proche got his hands on the ball after an initial deflection by a Bengals defensive back, but Proche wasn’t able to haul in the pass as time expired on Baltimore and its season.

The Vikings capped off a 12-play, 75-yard opening drive with a Kirk Cousins sneak to put the home team up early, 7-0.

The Giants answered with a 28-yard touchdown of their own on their first possession, courtesy of Saquon Barkley.

After the Vikings went three-and-out on their next drive, the Giants took their first lead on the following possession.

First, Daniel Jones connected with Darius Slayton on a dazzling 47-yard gain, then he hit Isaiah Hodgins for a 14-yard touchdown to give New York a 14-7 advantage.

The Giants added a field goal late in the second half to make it a 10-point game.

Then, K.J. Osborn reeled in a 9-yard pass from Cousins to close the gap to 17-14 ahead of the break.

The Giants extended their lead, 24-14, thanks to a 9-yard score from tight end Daniel Bellinger early in the third quarter.

The Vikings fired back with a wild score from their tight end, Irv Smith Jr., on their first drive of the second half. Just like that, it was a three-point game once again, 24-21, midway through the third quarter.

Then, Minnesota added a field goal at the top of the fourth quarter to knot things up at 24 points a piece.

The Giants made a statement on their ensuing drive. First, Hodgins came up with a 19-yard pickup to move the sticks. Then, Jones & Co. picked up a fresh set of downs after a successful fourth down conversion, and Barkley punched in a 2-yard score to give N.Y. the late lead, 31-24, that they held on to until the end.

The Bills’ opening drive didn’t go as planned. Allen fumbled on a short scramble, but the ball went out of bounds in the process. The Bills ended the possession by turning it over on downs on Miami’s 32-yard line.

After the Dolphins went three-and-out on their first drive, the Bills got the ball back quickly and redeemed themselves on their next possession. Allen connected with Dawson Knox for a wild one-handed score to put Buffalo ahead early, 7-0.

The Bills capitalized on the turnover in a big way, moving downfield with ease before rookie running back James Cook punched in a 12-yard score to extend Buffalo’s lead to 14-0 late in the first quarter.

Allen hit Gabe Davis up the middle for a 19-yard pickup that was originally deemed an incomplete pass. Buffalo challenged the ruling, and the play was reversed, putting the Bills near midfield heading into the second quarter.

Both teams traded field goals to make it a 17-3 game midway through the second frame. Chaos ensued after Allen’s pass to John Brown was picked off near Miami’s goal line by Dolphins cornerback Xavien Howard and returned to midfield.

The two squads got in a scuffle after the play, drawing offsetting unnecessary roughness penalties. The turnover resulted in a field goal for Miami, which closed the gap slightly, 17-6, late in the second quarter.

The Dolphins finished the first half with a bang, as Cedrick Wilson Jr. returned the punt 50 yards to Buffalo’s 27-yard line. The drive ended in another field goal, as Miami made it an eight-point game, 17-9.

The Bills ran into some trouble just ahead of the break. Allen’s pass to Cole Beasley bounced out of the receiver’s hands and into the arms of Dolphins safety Jevon Holland, who returned it 29 yards to Buffalo’s 18-yard line with less than a minute to spare before the end of the first half.

Miami ended the drive by tying up the game at 17 points a piece after a touchdown from tight end Mike Gesicki and successful two-point conversion from Tyreek Hill.

Call of the wild!

Miami’s tie lasted less than a minute, as Buffalo snuck in a field goal just before halftime. But after going three-and-out to open the second half, the Dolphins snatched the ball away from Allen as well as the lead. What an improbable turn of events.

Buffalo regained the lead late, 27-24, in the third quarter after a costly Miami interception.

The Bills extended their lead to 34-24 heading into the fourth quarter, thanks to a jaw-dropping 23-yard touchdown reception by Davis.

Following a sleepy quarter from Miami’s offense, Mike McDaniel dialed up some trickery to get his team back in the end zone. A reverse from Jaylen Waddle set up a short touchdown run from Jeff Wilson Jr.

Eyes on the prize

Bills receiver Khalil Shakir came down with a monster 31-yard catch midway through the fourth quarter to get Buffalo to midfield.

The Bills ended up punting the ball away after Allen took a huge sack on third down, but the Dolphins came up just short on their next possession, turning the ball over on downs. Things ended there, 34-31.