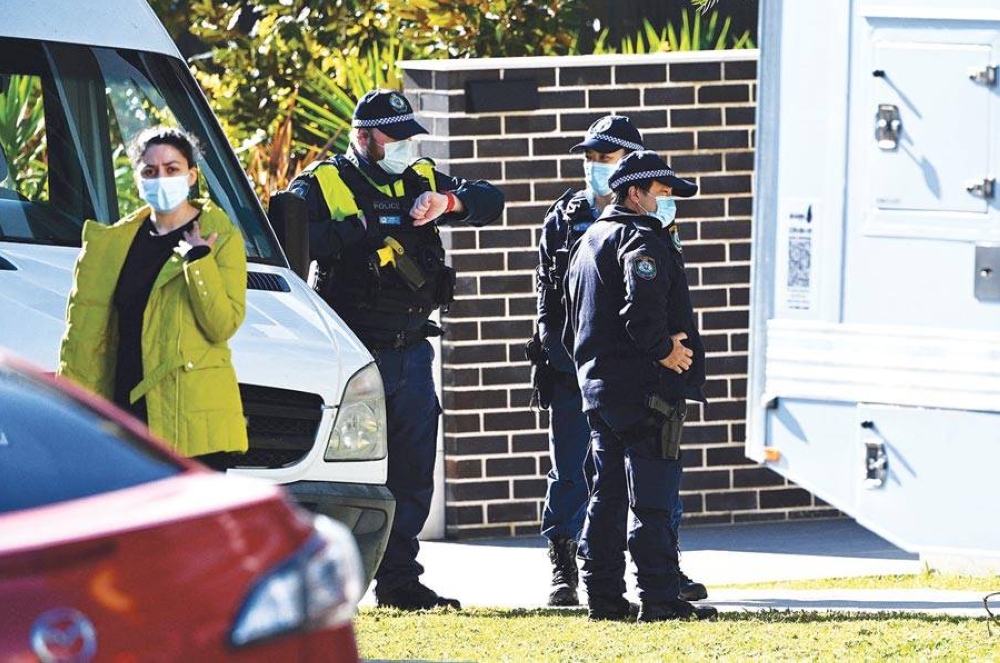 PERSISTENT SPIKE Police officers stand outside a residential building in the South Western Sydney suburb of Campbelltown on Aug. 4, 2021 after residents were placed in isolation due to reports of Covid-19 infections within the building. AFP PHOTO

Australia’s hope of returning to “Covid zero” suffered a fresh blow on Friday as Sydney reported another record number of new infections and authorities warned residents to brace for worse to come.

“At least 50 of those were infectious in the community,” Berejiklian said, foreshadowing more cases to come despite a lockdown that is now in its sixth week.

“I’m expecting higher case numbers in the next few days and I just want everybody to be prepared for that,” she said.

Roughly 60 percent of Australia’s 25 million residents are currently under lockdown as the country tries to curb the spread of a virulent Delta variant outbreak.

“To be really frank, we don’t have enough people that have been vaccinated and, therefore, this is the only option available to us,” he said.

Barely 20 percent of Australians have been fully vaccinated due to an acute lack of supply and pockets of vaccine hesitancy.

With cases rising and lockdowns seemingly able to slow, but not stop the spread, there are growing questions about whether Australia can return to the “Covid zero” status it enjoyed for much of the last 18 months.

“Given where numbers are, given the experience of Delta overseas, we now have to live with Delta one way or another, and that is pretty obvious,” said Berejiklian.

She said returning to zero cases would be “a challenge” but “that has to be our aspiration, we have to try to get down as low as we can.”

Meanwhile, there are signs that Australians are tiring of on-again-off-again restrictions that have marked pandemic life although compliance with lockdown rules is still widespread.

“I’m starting to feel like today it’s starting to hit me harder than any other lockdown. Hang on, I haven’t seen my family for such a long time.”