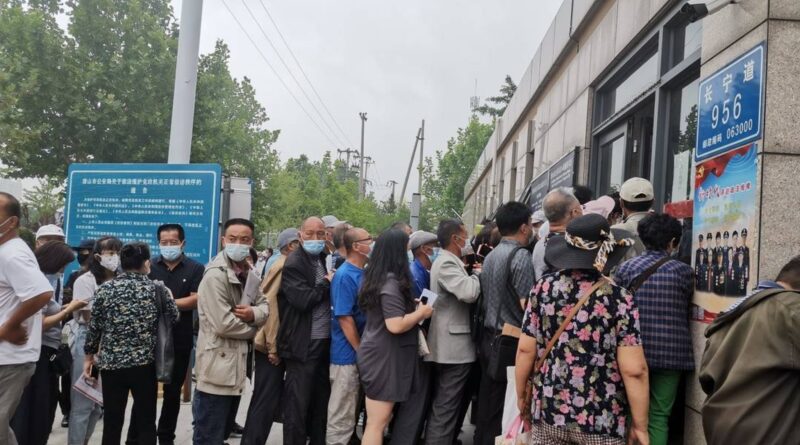 As part of the campaign, the officials ordered local police to ramp up patrols and ​​accelerate its response to reports of suspicious activity. They also called on the public to submit their complaints via special hotlines and neighborhood police stations, promising that all tip-offs would be treated by relevant authorities in confidence and that the informants would receive protection.

“[We will] focus on the criminal activities that bring out strong reactions from the masses and have a bad impact on society,” read the campaign announcement. “With a full-throated punch and heavy punishments, we will be ruthless and root out the evil at lightning speed.”

The plan was in response to a violent attack at a barbecue restaurant in Tangshan, a city of around 7.7 million people about 110 miles from Beijing in Hebei province. In surveillance camera footage that emerged last Friday and caused an uproar on the Chinese internet, a group of men are shown brutally assaulting a woman and her friends after she rejected an advance by one of them. Two of the women were admitted to the hospital afterwards with non-life-threatening injuries, and all nine suspects involved in the attack have been apprehended.

An ongoing investigation into the case revealed that at least five of the suspects had criminal records, ranging from offenses of drug use to running an underground online gambling ring. Three of them were released from prison in 2020 or 2021. The main attacker, surnamed Liú 刘, was accused of intentional harming of others in 2015, but wasn’t arrested until 2018, when he was accused of committing another offense of illegal detainment. In the three years that Liu was on the run, he caused a car crash when driving without a license (and fled the scene).

Given the massive delay in Liu’s arrest, suspicions have been rife on Chinese social media that Liu, along with several men in the video, are gangsters protected by corrupt police officers. Many observers claimed that the restaurant attack was just “the tip of the iceberg” in a city plagued by gang violence.

In the last three days, six suspects have been arrested as a result of the authorities’ anti-crime campaign. In one case, a cake shop owner claimed in a video that he was blackmailed by gangsters for more than a year and was openly threatened by them in front of the police. In another case, a bar singer filmed herself saying that she was assaulted and kept in illegal confinement for over 16 hours by a group of men.

While the claims made on social media garnered a great deal of public attention, others struggled to make themselves heard. According to news reports, due to staff limitations, many of the hundreds of people who showed up at Tangshan’s public security bureau on Tuesday had to stand in a queue for more than four hours to lodge their complaints. Some told news outlets that the tip line set up by the government was always busy.

Saying that the original number included in the campaign’s announcement was overwhelmed by calls, Tangshan authorities announced yesterday that it had added eight more tip lines for different neighborhoods.