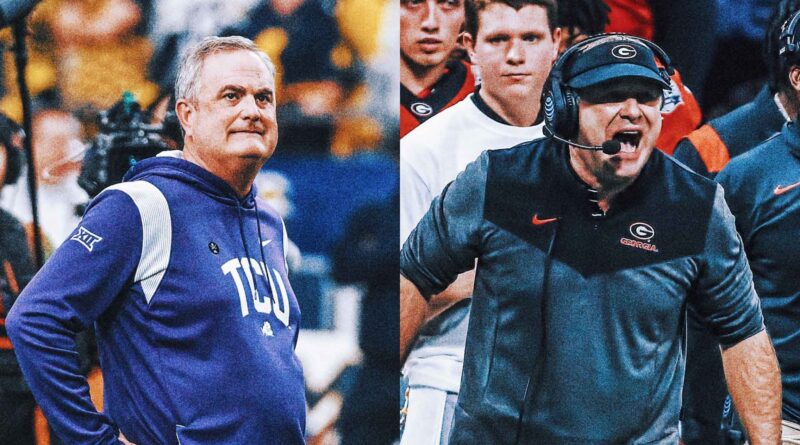 On paper, the College Football Playoff national title game between No. 1 Georgia and No. 3 TCU isn’t a heavyweight bout. It’s more like Mike Tyson versus Glass Joe in Mike Tyson’s Punch-Out!!

It’s like a stalk of high grass versus a lawnmower. It’s Aaron Judge vs. a slow-pitch softball machine.

It’s a lopsided affair, and the rosters these teams have built — and how they’ve built them — underscore just how different this national title game is.

Following a 2021 season that culminated with Georgia winning its first national title in four decades, the Bulldogs lost 14 starters from the best team in the sport, and the best defense the SEC had seen in 10 years.

For almost any other program, that’s a setback. In the modern version of the sport, it would also mean coaches all over the staff directory immediately hitting the ever-expanding transfer portal to find plug-and-play players who fit their needs.

These are but two examples of head coaches turning to the development and evaluation of other programs for their benefit. Lately, the prestige, brand and promise of money made in the form of name, image and likeness have meant the rich get richer.

All of these men chose Alabama for some reasons that are specific, but others that are quite obvious, like the ability to play for national titles and enter the NFL Draft with a high selection number — and the additional money that comes with that. A place like TCU, on the other hand, could not compete in that area. TCU could only hope to come up with the scraps that Alabama, USC or even Michigan State didn’t want — until now.

The Horned Frogs, to date, are the best example of using the transfer portal to build a team that competes for the national title.

No team in the transfer era has taken double-digit transfers, paired them with a first-year head coach and staff, and marched straight into the national title game. In fact, TCU’s Sonny Dykes is trying to become just the fourth coach in history to win a national title in his first year at a program — and the first since Larry Coker did it with the Miami Hurricanes 21 years ago.

Dykes earned this opportunity by building on the foundation left by his predecessor, Gary Patterson, who was remarkably brilliant and consistent at taking underappreciated high school players and developing them into top-tier NFL talents. Dykes and his staff took that, then hit the portal for what else they needed.

Shadrach Banks played wide receiver in high school, and his game was favorably compared to Amari Rodgers. But Banks plays linebacker at TCU because that’s what Patterson thought he’d do best. Patterson did this once before with Ty Summers, who committed to play quarterback at Rice in 2013 before flipping his commitment to TCU and becoming a defensive end and linebacker.

With the benefit of Patterson’s evaluation, Dykes and assistants also managed to earn transfers — 13 in fact — that chose TCU because they were not given the opportunity elsewhere to play right away or to make an impact on their teams in the manner each of them envisioned. With players like Johnny Hodges choosing to transfer to TCU from Navy and bolster a scheme that defensive coordinator Joe Gillespie had proven could develop first-round NFL talent at Tulsa, TCU just looked to give itself a chance.

And that’s all it was — a chance. The Horned Frogs are the first to point out they were picked to finish seventh out of 10 teams in the Big 12, and they have benefited from being overlooked and underestimated from Week 1 forward. They are, in that respect, diametrically opposed to their opponent on Monday night.

Georgia was picked by most to play in this game almost as soon as it won the 2021 national title, despite losing so much experience and production to graduation and the NFL. That’s because Kirby Smart has affected the philosophy toward recruiting and development of his mentor, Nick Saban. They pick them, they sit them, and they develop them.

Can Max Duggan lead an upset over the Bulldogs?

Smart, in just five years, cranked Georgia into a new benchmark for recruiting, and then dispersed that talent across both sides of the ball. Fifteen five-star players and 78 blue-chip recruits — five- and four-star players — dot UGA’s 85-man scholarship roster.

TCU boasts just 17 blue chips and one five-star player, ranking 32nd in the 247 Sports Talent Composite behind programs like Georgia Tech and Missouri.

Many programs claim to reload rather than rebuild. UGA takes it further, instilling a culture of Bulldog football along the way. As the portal gains entrants and NIL becomes the currency for which signings are made, UGA sells teenagers on this culture, convincing them to bet on the process with the idea that it will pay off in a few years’ time. It’s proven to be a winning strategy.

However, not every program has the wherewithal to build that way, and not every program will have the financial capability to sustain the effort of courting the best players in the country year after year. So UGA will likely be here, in this conversation for national titles, longer than TCU.

But more offseason booster program talk will be marked by wealthy donors approaching their respective coaches at caravan stops and asking why they can’t be the next TCU. Those coaches will have no choice but to say that it’s possible — and pursue it.