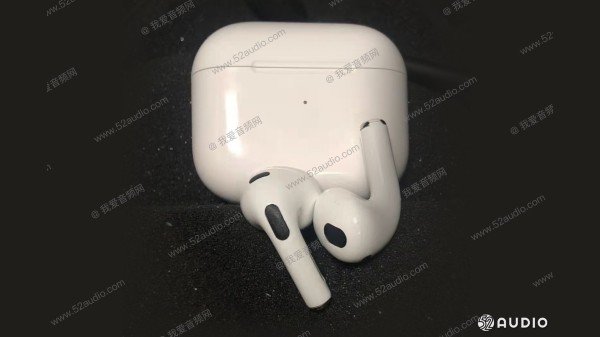 Apple is gearing up for its Spring event, which is set to bring in the next-gen iPad Pro, MacBook, and several other gadgets. At the same time, the next-gen AirPods have surfaced online. Rumors suggest the Apple AirPods 3 will also be debuting pretty soon as fresh leaks give us a sneak peek at the design details.

The leaked renders come from 52Audio, which reveals the images of the rumored Apple AirPods 3. From the looks of it, the upcoming TWS earbuds look very similar to the AirPod Pro. The device draws inspiration from the AirPods Pro, but only with a shorter stem.

Since the upcoming AirPods 3 are going to be an upgrade, it packs larger proximity sensors and includes speaker components on the outside. Much like the AirPods Pro, the alleged AirPods 3 will also include an additional pair of sensors on the lower side of the earbud. Also, a rectangular charging model has been tipped for the upcoming AirPods 3.

This isn’t the first time we’re hearing of the Apple AirPods 3. Previous reports suggest the upcoming audio accessory could include the same H1 chip as we saw on AirPods 2. However, Apple is expected to bring in several upgrades in the battery life, playback controls, and even the audio output.

That said, reports suggest the Apple AirPods 3 will not include Active Noise Cancellation or the Transparency Mode. This might seem like a bummer, considering the upcoming earbuds are going to be quite expensive and there are several earbuds in the market with ANC and transparency mode.

Furthermore, the tipster has also thrown some light on the pricing of the Apple AirPods 3. If these reports are to be believed, the AirPods 3 are going to be priced similar to the AirPods 2, which could be anywhere around Rs. 15,000. Looking at the features tipped, the price tag could be quite expensive!

For now, there’s no solid evidence about the launch date of the upcoming earbuds. Reports suggest the Apple Spring event scheduled on March 23 could also bring in the new AirPods 3. The event is set to bring in several new gadgets including the much-rumored Apple AirTags, iPad Pro, MacBook, and so on.

Nevertheless, the upcoming AirPods 3 is going to draw some attention from Apple fans all over the world. Like most Apple products, this too going to be quite expensive cased in a classy design with rich features and would be even better with ANC. Since none of these rumors are officially confirmed, we advise taking it with a grain of salt.