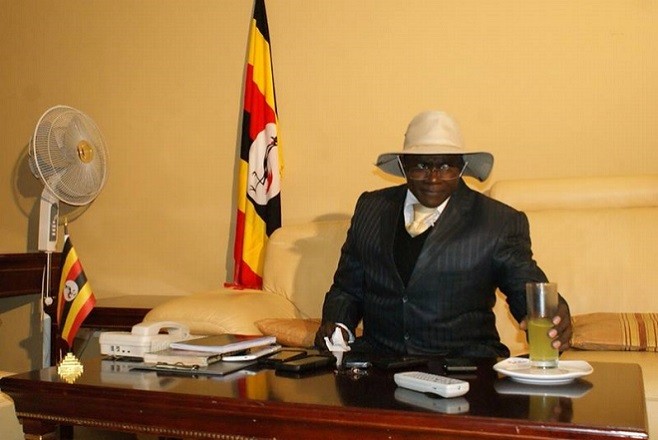 As one man once stated it that money and arrogance are inseparable at times, this seems to be reigning the podium. For starters, the podium is the Brian White foundation.

Well the statement directly reaches to  a one Ssegujja Herbert Mendo aka Sevo(The President’s Mimic) also known as Teacher Mpamire who recently insulted a journalist over Brian White and the podiium!

It all started when a senior journalist; Henry Ssali chose to give his opinion about the foundation where he revealed that the podium had done so much as far as putting Ugandan, artistes in order is concerned.

Henry revealed that in his opinion, the artistes have learnt to respect others(meaning they respect Brian White’s Orders) and they have also learnt to keep time as they are seen at the podium even in the early hours of the morning.

“By the time the Bryan White chapter ends in Uganda’s social soap opera we shall have some disciplined celebrities” reads a line in his statement.

This caused a lot of mixed reactions from the public among which was one Galiwango Nsubuga, a senior entertainment journalist at vision group who wrote and said:

“They no longer cash in the big monies they used to, yet they have to maintain their lifestyles and pay the bills, much more bills than they had in the days of their shine. Chameleon no longer cashes in like he did between 2005 and 2012. Yet he has more bills to pay now than then. More responsibility. More kids who go to expensive schools plus a host of other things. Kyoka akasente kakendera. So he is on the mercy of pencil-thin Bbulayani.“

“Henry, I usually tell people that the reason musicians fail despite their talents, is their ignorance of the value of management. The two main examples I use are; Radio and Weasel with Jeff Kiwa, and Rabadaba with Henry Ssali. It is not that these guys’ talents waned over time, No! But they disrespected proper management. They were ignorant about the value proper management added to their careers. I wish they learn this lesson.” He also added.

Well this didn’t go well for people like Sevo(also part of the podium) aka Teacher Mpamire who probably fumed and chose to insult the journalist for giving his opinion.

Below Is Henry’s Full Statement.

BRYAN WHITE HAS TAUGHT OUR CELEBS SOME LESSONS

In 2006, there was public uproar as a certain mzungu guy named Hornsleth was giving Mukono peasants pigs in exchange for his name. People had to get new IDs with the name Hornsleth. By the time government stopped Hornsleth, he had renamed 270 people he had given pigs and another 70 he had given goats.

Hornsleth later held an art exhibition in Denmark themed “We Can Help You, But We Want To Own You” where he showed photos of the poor Ugandans he had renamed displaying their new IDs with smiles.

Bryan White and his uniform and ID wearing celebrities reminded me of the Hornsleth. Bryan White has managed to “own” some of our biggest stars and no one leaves the “podium” unless her permits it, but that’s besides the point.
I think every cloud has a silver lining.

The good thing is that he has managed to teach our musicians several things like respect. Some of the musicians on the “podium” have had the genuinely rich men in this country and the biggest corporate entities at their mercy. They pay them and they don’t turn up for shows, or when they do, their conduct is an event spoiler.

Some of the musicians have had multi million retainers from big corporate companies like beer and telecoms but they have never worn these companies T-shirts. Whenever a brand manager gives them a T-shirt at a show, they throw it into the crowd, but now they even wear IDs. Those are good lessons for them to learn that he who pays the piper calls the tune.

Speaking of IDs, these are celebrities who never go through any security checks because they use face value. When everyone else flashes an ID and is frisked by security, they flash that don’t you know me face. Now they are wearing IDs like Hornsleth’s peasants.

Bryan White has also taught these guys time management. Who knew that some musicians could attend a “press conference” at 8a.m when all they have to do at that press conference is to wear a foundation shirt and an ID. These are guys who are always late when they are paid to perform at an event at 10p.m. But now they are on the “podium” at 8a.m.