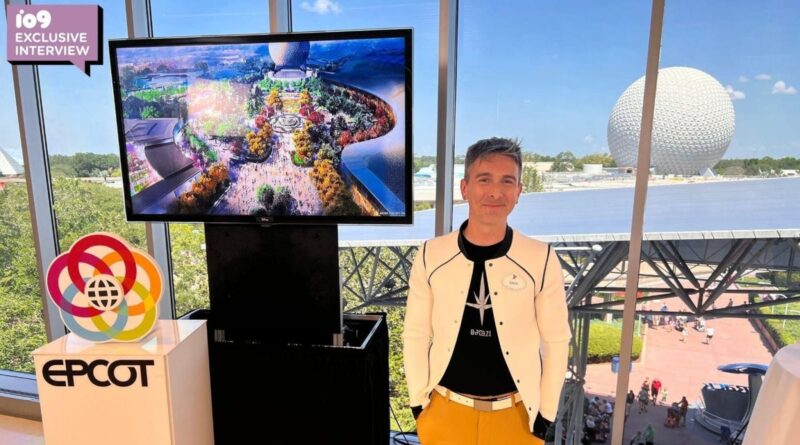 There are lots of new things happening at Epcot as part of the ongoing 50th anniversary celebrations at Walt Disney World in Orlando, Florida, and io9 was invited to preview the latest expansions.

Last year things kicked off with the opening of Remy’s Ratatouille Adventure in the France pavilion, and in just a few weeks Guardians of the Galaxy: Cosmic Rewind is set to transport park guests on a new space travel adventure. For a theme park centered around exploring the cultures of far-off places, environmental biodiversity, the future of travel, and festivals highlighting how people celebrate seasons around the world, it leaves us wondering how popular Disney IP is selected to be highlighted in a park that has always been touted as more than just a theme park. After all, it was supposed to be where Walt Disney’s experiment for a community of tomorrow tested out new innovations for the betterment of humanity (and why a certain district was created).

On our visit, io9 talked to Imagineer and creative portfolio executive Zach Riddley about recent changes at the park—including how mashing up Disney’s popular IP comes with deep considerations to homage the core of the park’s vision through its re-imagined pavilions and entertainment offerings.

Sabina Graves, io9: With the opening of Guardians of the Galaxy: Cosmic Rewind we’re seeing the evolution of Epcot on full display while the parks operate. What can you share about leading the next phase of the transformation?

Zach Riddley: For me, what’s great as an Imagineer getting to lead this effort is this is the park I went to as a kid. I kinda have to pinch myself in getting the responsibility to think about how to bring this park forward. For us, it’s the largest transformation that we’ve taken on and we’ve been able to get a lot of the elements out for people to experience them, like Ratatouille, Harmonious, and Space 220—and soon Guardians—but also it’s a continuing process. [In] World Celebration, one of four neighborhoods we use to organize the park, is one of the biggest projects we’re undertaking right at the center of the park with Spaceship Earth. It’s really ongoing ideas we’re not going to lock in place, but there’s a center planter so that you can essentially create these moments…

io9: Like the Muppets’ “Rainbow Connection” light show during the Festival of the Arts?

io9: (Says aloud not realizing) Bring it back.

Riddley: (Laughs) And it’s amazing to see. I mean, it’s such a great icon to be so emotional. At night this entire place can be programmed in the way that Spaceship Earth is in terms of lighting, music, and color. We have over 12,000 programmable LCD fixtures once this is complete—and so take “Rainbow Connection,” but entirely immersed. And I think that’s the tone, that’s the spirit of it underlying all of the ideas. Later it can be changed for the Food and Wine Festival in that same space, we can have new topiaries [for Flower and Garden]. But there’s one detail that as an Epcot fan that you may know, which is our illuminated pavement. This was a design feature early on in Epcot, fiber-optic paving. We got new technology, so we’re embedding that here and it’s actually in the shape of the Epcot logo. So it’s things like bringing back touches of that.

io9: So I didn’t get to experience Epcot until I was an adult, but I had written about it growing up as a fan of Walt Disney’s original vision for cities of the future. I love how over in Disneyland’s Tomorrowland, we have those edible plants and things that are kind of sustainable resources that pay homage to the core themes of his plans throughout. Can you speak to that a little bit? If we’re going to be seeing that in some of the future environments as well?

Riddley: For us, it’s about possibility. We say it’s magic and possibility. So it’s a park about people, things that inspire us. [We thought about] the subjects that we want to bring forward, and we looked at what are some of those timeless ideas, stories that Disney can bring a unique entry into, but [are] also something that you could experience in 20 years. And you’re still getting that that kind of aspiration so that we don’t create a situation where instantly it’s out of date, we move past it to find it. So for us, those are what we’re calling these timeless stories that are in these themes that Epcot uniquely can bring. We do have an entire greenhouse on Living With the Land, the showcase of all that technology. With Journey of Water—this is a good example of how Epcot and Disney intellectual property come together. Journey of Water inspired by the Moana is another experience that’s coming as part of the vision. And that’s in the World Nature neighborhood, which is on the other side of the park that’s adjacent to The Seas and The Land.

Riddley: For Journey of Water, the idea is really celebrating the cycle. You actually get a chance to meet water the same way Moana meets her friend water in the film, and we have some really fun experiences as you move through this trail that are totally unique, invented for this. But the underlying subject is really the importance of preserving water, like the cycle of water, the fact that all water is essentially finite, and it’s important for us to understand its role and to preserve it as a resource, so we’re able to use elements from Moana’s story. But the Epcot story is about water and its conservation; that idea is rooted in real ideas, real things that inspire us but then actually take you into that experience. That’s what we think the unique space of Epcot can bring to life.

io9: How do you balance that with still keeping enough or finding ways to bring back aspects of the Epcot fans know and love?

Riddley: It’s got a really unique personality and design legacy. A lot of the choices that we’ve been making—not only in individual experiences, but even the logos bringing back Epcot’s own font—go back to the original park. So how do you bring all that back in as something that’s unifying? You only do it here. You know, we have it here, but then bring it forward in ways that, again, are fresh and relevant for fans who maybe have never been here before. To me, that’s the ultimate success with the transformation.