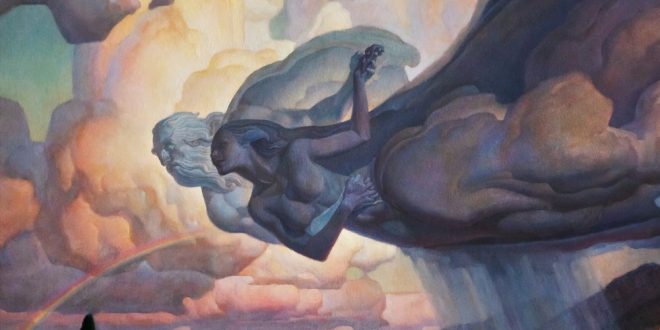 The Killers: Imploding the Mirage | Review

To understand how far queer culture has come in public acceptance, look no further than the immaculately coiffed, straight, Las Vegas Mormon striving to live down every one of those adjectives. Since 2004’s Hot Fuss, Brandon Flowers of the Killers has chipped away at his weaknesses. From the ambisexual roundelay of “Somebody Told Me” and the way he stressed the rival “beautiful boy” in “When You Were Young,” to the cheeky interpolation of Bronski Beat’s epochal he’s-leaving-home anthem “Smalltown Boy” on his solo track “I Can Change,” Flowers has telegraphed a primal longing: Why didn’t God make him a gay musician? Instead, God made Flowers a singer-keyboardist who sets his larynx ablaze from the effort of caring. He writes songs for the young dreamers who hope to be rhinestone cowboys; he wants to see thousands of Brandon Flowers bloom. As tacky and bombastic as a Fourth of July celebration, Imploding the Mirage has more bangers than a Killers album should 16 years after their debut and without copping to “maturity.” This band remains as absurd—marvelously so—as ever.

How quarantine may enervate this most arena of rock bands we don’t know; for now, though, Imploding the Mirage, with key production and songwriting assists from Foxygen, gives no indication Flowers has downsized his ambition to make the loudest, grandest rock album in an era that sees too few of them. The man who allowed the queer-ish dance act Pet Shop Boys to remix “Read My Mind” also adores early Bruce Springsteen: the riffs, the scale, the penchant for florid twaddle. But Flowers doesn’t write Springsteen songs, he writes concordances to Springsteen songs, set to pillowy synths and with drummer Ronnie Vannucci Jr.’s beats frisky enough for audiences aware of but not infatuated with dance music—like, say, Springsteen’s. Girls still excite him here—the ones who smoke cigarettes and “breathe in the blowback” and “fight back.” And the Killers are liberated, sort of. “I’m throwin’ caution,” Flowers wails on the first single, abbreviating “throwing” like an honor roll Springsteen student. Is that Can’s “Moonshake” in the nervous opening tap-tap of “Dying Breed”? Does he really sing, “What kind of words would cut through the clutter of the whirlwind of these days?” on “My Own Soul’s Warning”? Smile like you mean it, Brandon!

Applying the lessons learned about sustained ecstasy from previous producer Stuart Price, the Killers sequence Imploding the Mirage so that the circumference of each mushroom cloud of a song expands as the album goes on. Dave Keuning adds thoughtful guitar crinkles to “Running Towards a Place,” treating Flowers like Stevie Nicks to his Lindsey Buckingham—who, incidentally, cameos on “Caution.” “My God,” a prayer and exultation, corrals a choir and Weyes Blood doing their “All These Things That I’ve Done” thing while Flowers pushes his voice toward tones and stresses unheard by mortal man, all for the sake of the adage: “Don’t push/Control is overrated.” Then he loses control again on the next track, the glistening “When the Dreams Run Dry.”

In 2004, when the Killers released “Somebody Told Me” and especially “Mr. Brightside,” the embrace of their wobbly, lurid Technicolor psychodramas coincided with the post-Napster generation’s discovery of a version of the 1980s their older siblings shunned. Flowers may even own a stack of CD-Rs on which songs with gated drums and synth strings compete with a singer determined to outsing and out-hair them both: bands like, who knows, Survivor. In other words, Flowers likes the tacky ’80s; he remains a Las Vegas boy born with eyes sharpened by neon. But here’s the difference: Rather than record treacly updates of “The Search Is Over,” his mission is to find the Neil Tennant in Survivor, as much a quixotic mission as a genuine what-the-fuck moment: a cishet performer who queers anonymous Wembley Stadium tubthumping with bizarre word combinations. After a few listens to the new album, I couldn’t tell you what “imploding the mirage” means. Whether Flowers knows himself is worth debating. The brio is the point.

Sixteen years after Hot Fuss, the Killers benefit from a gradual acceptance of gender fluidity, sheer grinding persistence, and, thanks to COVID, an aversion to male hair trimmings that result in an Icehouse-era generosity. No one quite sounds like them in 2020. No one will sound like them in 2031. They remain inscrutable and delirious, trying for big, cool with small. As he puts it on the title track, “Sometimes it takes a little courage and doubt/To push your boundaries out beyond your imaginings.” Get comfortable aging alongside Flowers as his Talmudic wisdom deepens.

(Pitchfork earns a commission from purchases made through affiliate links on our site.)

Catch up every Saturday with 10 of our best-reviewed albums of the week. Sign up for the 10 to Hear newsletter here.