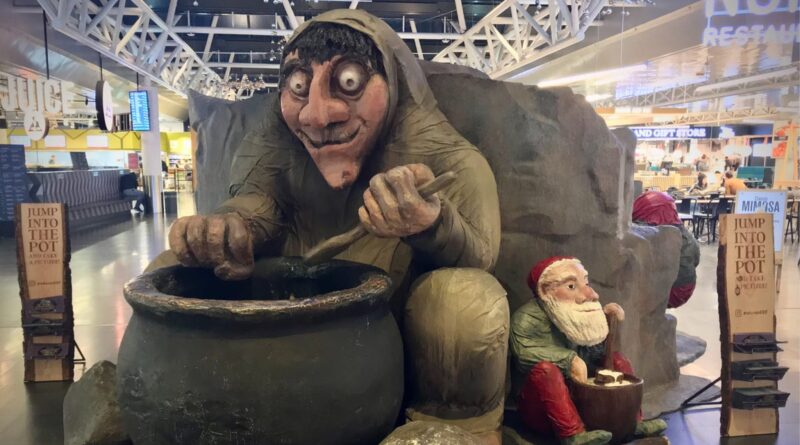 My condolences to the children of Iceland. While many Christmas celebrations around the world are full of tidings of comfort, joy, and rampant consumerism, for young Icelanders it’s a time of terror, where you’re lucky to escape with your life… or a potato. At least, that seems to be the case according to this fascinatingly frightening folklore.

Let’s begin with Grýla, a giant part-troll, part-animal creature who lives in the Dimmuburgir mountains and comes down at Christmas to look for naughty children to abduct. When she gets them home, she boils them alive in her cauldron for a piping hot stew for herself and her third husband, Leppalúði, which lasts until the following winter. Apparently, Icelandic children are genuinely terrified of Grýla; depictions of the ogress can be spotted throughout the country, although sometimes she looks more like a huge, gnarled old woman than a beast. However, according to the Icelandic Legends collected by Jón Arnasen, published in English in 1864, here’s a description that indicates why she inspire genuine fear:

“Grýla had three hundred heads, six eyes in each head, besides two livid and ghostly blue eyes at the back of each neck. She had goat’s horns, and her ears were so long as to hang down to her shoulders at one end, and at the other to join the ends of her three hundred noses. On each forehead was a tuft of hair, and on each chin a tangled and filthy beard. Her teeth were like burnt lava. To each thing she had bound a sack in which she used to carry naughty children and she had, moreover, hoofs like a horse. Besides all this, she had fifteen tails, and on each tail a hundred bags of skin, every one of which bags would hold twenty children.”

That means Grýla is grabbing up to 2,000 naughty children at a go, which either indicates she’s a marvelously efficient kidnapper or Iceland has an unfathomably awful naughtiness problem. For the record, the official tourism site for Iceland softens Grýla’s image by saying she “can only capture children who misbehave but those who repent must be released,” but I can’t find another source to back that up.

Happily, Grýla managed to find love—well, matrimony, at least—on three separate occasions. The first two were named Gustur and Boli; legends vary as to whether they were eaten, murdered, or died of old age (and who died in which manner). She’s currently married to the troll Leppalúði, who lazes about in their cave while Grýla does all the work of kidnapping and cooking children. But they certainly have chemistry! The couple has 33 children, 13 of which are collectively known as the “Yule Lads.”

The Yule Lads aren’t murderers, thank goodness, but they are creepy. For each of the 13 days leading up to Christmas, one of these brothers comes to people’s houses and does something uniquely unpleasant. According to Iceland Travel, they also have very evocative names. They are…

Arriving December 12, he would find the ewes and drink the milk directly from their teats.

On December 13, old Giljagaur would wait “for a chance to sneak into the cowshed to slurp the foam off the fresh milk when the milkmaid looks away.” Iceland Travel’s words, not mine.

Thankfully, they’re not all milk perverts. Stúfur just wants the scrapings off frying pans when he comes to town on December 14.

A lot of the Yule Lads enjoy manually cleaning dishware. You can probably guess what ol’ Þvörusleikir gets up to on December 15.

Ditto, but for December 16.

These guys might seem benign, but they do leave you with troll spit everywhere. Anyway, bowls get licked December 17.

Your cookware and utensils become safe on December 18, when Hurðaskellir pops by to obnoxiously slam doors in the middle of the night.

With the doors slammed, the Yule Lads turn their attention to food. On December 19, Skyr Gobbler steals people’s skyr, an Icelandic dairy product akin to yogurt.

Rather self-explanatory and yes, he arrives December 20. However, he hides in your house’s rafters while waiting to swipe those sausages, which seems unnecessarily creepy.

Despite the English connotations of the word “peeper,” ol’ Gluggagægir is just looking in windows for stuff to steal on December 21. If you happened to be standing in front of your window naked, that’s on you.

Easily the most upsettingly named Yule Lad on this list, Gáttaþefur is actually one of the most benign—he respectively stays outside unless he comes to your door and smells Christmas cookies on December 22.

And we’re back to meat theft! On December 23, Gáttaþefur heads to your rook and lowers a hook down your chimney, hoping to snag any meat hanging from the rafters or cooking on the fire.

Finally, Christmas Eve sees the arrival of Kertasníkir, who, weirdly, wants to take a bit out of candles.

Despite their particular fetishes, the Yule Lads will leave a small treat for children who leave their shoes out on windowsills—if they’ve been good. If they’ve been naughty, they get a rotting potato, although they’ll likely be killed and eaten by Grýla before they get a chance to find it.

But Grýla is not the only killer who stalks Iceland at Christmas. Grýla has a cat named Jólakötturinn, the Yule Cat, who’s black as night and towers over houses, and has a very unique appetite. It is said he prowls the town and will eat anyone—not just children—who doesn’t receive an item of clothing for Christmas. While the folklore of the Yule Cat stretches back centuries, it was made famous in Iceland in 1932 by Jóhannes úr Kötlum, who wrote a poem about it. This was later set to music, which was recorded even later by the Icelandic pop star Bjork. Here’s part of what seems to be the most popular, albeit quite literal, translation of the poem on the internet:

If outside one heard a weak “meow”

Then unluck was sure to happen

All knew he hunted men

He followed the poorer people

Who didn’t get any new clothing

Near Christmas – and tried and lived

From them he took at the same time

All their Christmas food

And ate them also themselves

To rock and sow and spin

Or one little sock

Brutal, eh? Well, the silver lining is that the Yule Cat isn’t just a merciless killer of the impoverished, but a grim reminder to give to those in need…so they don’t get murdered by a cat. The poem continues:

If she still exists I don’t know

But for nothing would be his trip

If everybody would get next Christmas

You may want to keep it in mind

To help if there is need

Who get nothing at all

Mayhaps that looking for those who suffer

From lack of plentiful lights

Will give you a happy season

Merry Christmas everyone! And sorry, Iceland.