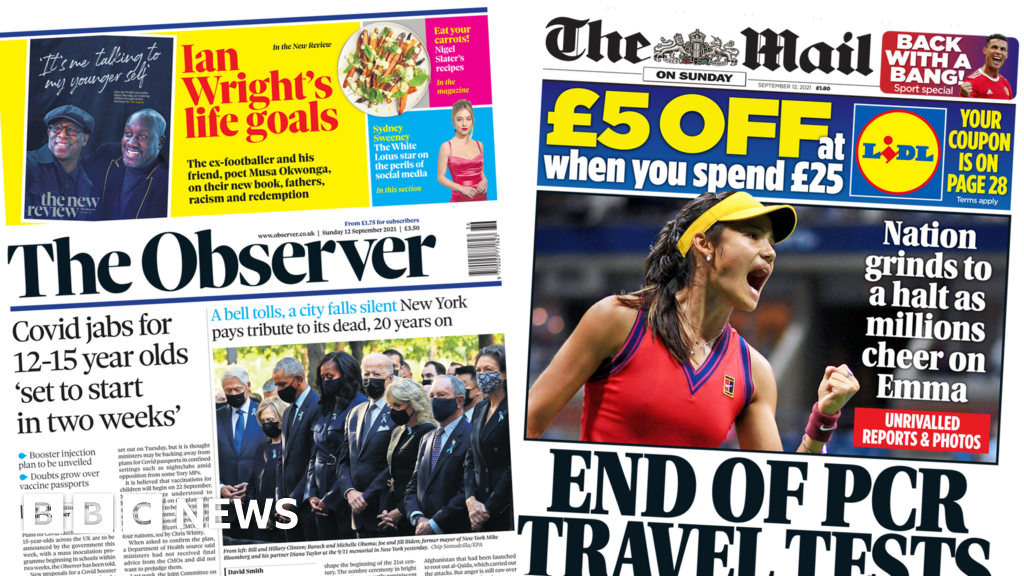 The Papers: Jabs at school in two weeks and travel tests axed

It was one of “sport’s great triumphs,” says the Sunday Telegraph, before listing her achievements.

“First qualifier to win a major title, the first to win on their second main draw appearance, the first British women’s champion for 44 years and the youngest for more than 60,” the paper says.

The Brit triumphed despite suffering a nasty cut to her leg, leading the Sunday Express to describe the victory as one of “blood, sweat and cheers”.

The Guardian says she ended the US Open where she started it, fearlessly dominating from inside the baseline.

The New York Times is similarly impressed. She handled the final like every other match she played in the city, it says, demonstrating “a rare mix of power and precision”.

The Sunday Times says the school leaver, who described herself as the quiet one who didn’t really raise her hand in the classroom, now has the world at her feet.

The Sun on Sunday draws a contrast with her life during lockdown, when she was forced to play tennis in the street with her dad. Now, it says, she’s “one of the most marketable athletes in sport”.

Plans for vaccine passports in England will be scrapped, according to the Sunday Times – a week after a minister said they’d be introduced by the end of the month.

The paper reports that Boris Johnson tore up the proposals after scientists said vaccination would be an effective first line of defence.

It adds the move is a “significant concession” to Tory backbenchers fearful of creating a group of “second-class citizens”.

In its lead, the Mail on Sunday reports the government is set to relax the rules on PCR travel tests for fully vaccinated holidaymakers.

It says pre-departure checks for Covid-19 will be axed and PCR tests, currently required on the second day after returning from abroad, will be replaced with lateral flow ones.

The change, according to the Mail, will be brought in before half term next month, slashing the cost of family holidays by hundreds of pounds.

The Sun says the measure would allow the travel industry to compete with EU countries which no longer have the tests.

The Observer pictures a masked Joe Biden – alongside Barack Obama and Bill Clinton – as they marked the twentieth anniversary of the 9/11 attacks.

According to the New York Times, some who paid their respects at the memorial were too young to remember the atrocity – describing them as a generation born in its shadow.

And the Mail’s website profiles Anne Fish from Surrey – who, a month before her 59th birthday, has signed a contract to show off her prowess at the computer game, Fortnite.

Inspired by her son, who’s also a professional gamer, she’ll soon be livestreaming videos of herself in battle.

She tells the paper that sometimes she plays for 18 hours straight – only taking breaks to make cups of tea and use the bathroom.