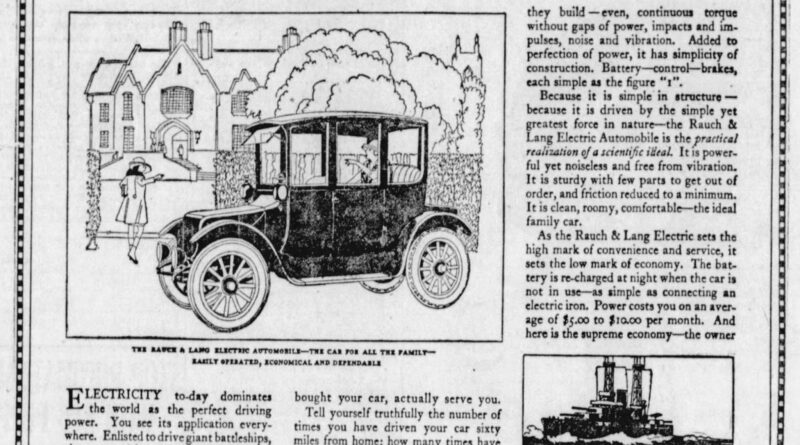 At the turn of the 20th century, one-third of all cars produced in the U.S. were electric. By the 1920s, gasoline-powered cars had grown to dominate the market because they offered greater range and speed. But one electric car company asked newspaper readers in 1921 to be brutally honest with themselves about what they actually needed in a car. And the questions seem extremely relevant to today.

Rauch & Lang purchased an advertisement in the October 16, 1921 edition of the Kansas City Star with the headline “The Challenge of the Electric Automobile.” The ad implored potential car buyers to ask themselves hard questions about how they actually use their cars.

Were you really going to take that long car trip you’d always been dreaming about? Or did your car really exist as a way to get to work, visit the theater, or hang out with friends?

Tell yourself truthfully the number of times you have driven your car sixty miles from home; how many times have you driven more than thirty miles an hour. How often have you been where the law allows you to drive more than twenty?

Isn’t this essentially what an automo­bile means to you: a conveyance to take you to and from work—to the club — to the theatre — to the homes of friends — to church, or for a short spin in the country. No need of high speed, and seldom a chance to use it.

In short, your real use for an automo­bile is the kind of use which the Rauch & Lang Electric Automobile gives best of all types of cart. It is best because it is more pleasant, more reliable and more economical to you.

What the Rauch & Lang Electric Auto­mobile gives you is the service you need day in and day out—the perfection of service in driving in crowded traffic, over streets rough or smooth—quick starting —quick stopping,—and above all, economy of operation and maintenance.

The speed limits have changed, as there are plenty of places to drive more than 20 miles per hour now, thanks to the federal highway expansion plans spearheaded by President Dwight Eisenhower in the 1950s. But the ad still poses reasonable questions about how we use our cars here in the 21st century, especially as electric car technology improves.

Everyone from Hyundai and Honda to Ford and Porsche are making electrics, to say nothing of Tesla, the current king of electric cars in the U.S. by sales volume. And the market will only continue to grow as the infrastructure for electric cars improves.

Invisible liners that make you feel great.
This doctor-directed treatment costs thousands less than braces, and is done entirely from the comfort of your own home. The process starts with teeth impressions, and after that, doctors formulate the best plan of action for your smile.

Of course, there are plenty of things about this car ad that would seem incredibly weird to the driver of 2022. One curious feature of Rauch & Lang cars is that they didn’t have a steering wheel, instead using a tiller steer that’s only really found on boats here in the 21st century.

You can see what that kind of steering looked like on a Baker electric car from 1901 below.

Electric cars of the 1910s were still something targeted primarily at the wealthy and some middle class people. But after World War I, there was an explosion of interest in buying all kinds of cars, in part thanks to something that had never really existed before: the used car market. Rich Americans who had purchased cars in the 1900s and 1910s were ready to trade in their older cars for something new and shiny, allowing the American middle class to finally gain access to the freedom enjoyed by driving an automobile—or at least that’s how it was sold.

Is range anxiety keeping you from getting an electric car? That’s only normal, but we can perhaps take some lessons from the past. Do you frequently use your car to drive hundreds of miles in one shot? Then maybe an electric car isn’t for you right now. But if you’re like most people and just need to go to work, get to the store, and visit some friends, an electric car might be for you.